A Book For Every Major 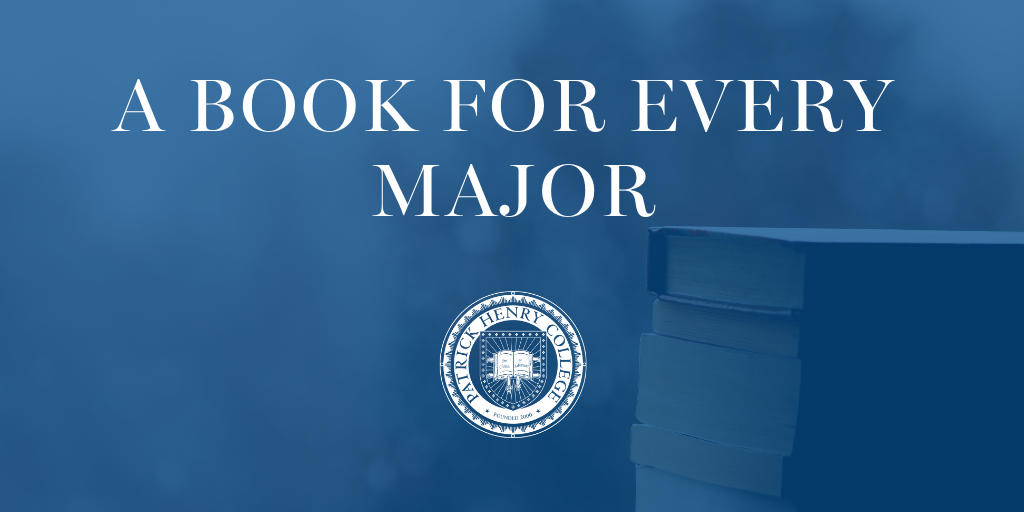 You know what music we listen to.  You know what movies we've watched. Have you ever wondered what books we read? Of course, Dr. Grewell and Dr. Hake share the classics with us in Western Literature, but what book does the everyday undergrad grab off the shelf on rainy days? It turns out there’s a book for every major.

***Notice: Patrick Henry College does not officially endorse the following book selections or the worldviews they represent. These selections were gathered by a member of the LearnPHC staff for educational purposes only.

Government: All the President's Men by Bob Woodward and Carl Bernstein

This classic work of non-fiction chronicles the efforts of its two authors to unveil the Watergate scandal. Woodward and Bernstein were reporters for The Washington Post  in 1972 when five burglars broke into the Democratic National Committee (DNC) headquarters in the Watergate offices. These two men unraveled the truth, revealing President Nixon standing behind the curtain.

The book explores the interviews the reporters conducted,  reveals identities of once-anonymous sources, and leads readers through the trail of clues from their initial article on the DNC burglary up to six months before Nixon resigned. Through this book, readers can see the mistakes the American government once made, and they can find hope that going forward, rising politicians can choose to make the right decisions.

What does this dystopian novel written in 1931 have to do with Journalism? Maybe All the President's Men by Woodward and Bernstein is the more obvious choice, maybe even something fictional about a journalist: The Great Gatsby by F. Scott Fitzgerald? You might think we should have picked something real--not this dystopian fiction. What you don't see is the grim reality apparent in Brave New World.

Dr. Sillars asks many of his students to read the introduction to Neil Postman's Amusing Ourselves to Death: Public Discourse in the Age of Show Business,  in which Postman reveals the importance of understanding Huxley's novel. Huxley was no journalist. He wasn't recording the truths he saw around him; he imagined a future based on his observations in the present. He wasn't a fortune-teller either--he just guessed right.

The truth of this novel is found in the vices of the people living in 2540 and the government's methods of keeping the public at peace. The technological advances allow humanity to live without making any connections. Moreover, everyone takes a happiness-inducing drug to keep negative emotions at bay.  Huxley foresaw a society entertaining itself to death.

Death himself narrates this bestseller. The first time he sees the main character Liesel, is when her younger brother dies on a train ride to Munich. The children were on their way to live with foster parents, because their mother was sick, and their father was arrested for being a communist. After her brother's burial, Liesel steals her first book from one of the gravediggers, gaining the title of Book Thief.

Alone and away from everything she's ever known, Liesel is able to find comfort from books when her faster father Hans begins teaching her how to read. As the plot progresses, the Nazis begin gaining more control of Germany and the surrounding countries. Through the stress of Nazi occupation, Liesel continues stealing books from a wealthy neighbor. Through the bombings, Liesel reads and eventually begins writing her own book.

This novel is the perfect story to display the importance of literature. Though the ending isn't quite a happy one, readers can't help but be drawn in and convinced of the fantastic powers of reading.

Do you ever wonder if we'ere all just pieces in a big game of chess, if the world is a stage and you're a puppet? This turns out to be the case for Sophie.

This Norwegian novel follows the life of a 14-year-old girl who finds out her life is a fairytale created by a father for his teenage daughter. Frustrated with her father, the girl begins manipulating Sophie's life, sending other fairytale characters into Sophie's world.

As a means to fight off the changes to her world, Sophie learns everything she can about philosophy. She may not be able to stop the changes, but she can ground herself in the reality she once knew. She studies all the thinkers from the Pre-Socratic era to Karl Marx. By doing so, she is able to show the daughter the importance of knowledge and bring the father and daughter back together.

This is a great example of how much power education can have. Even if it is a little fantastical, the values still come through, and readers can learn a little about philosophy along the way.

You may have heard of Ender's Game, and you may be wondering what a dystopian sci-fi novel about kids in space has to do with history. Frankly, the book by itself doesn't have much to do at all with history. It's provides far more commentary on the military, international relations, and child psychology than it does on history.

But I didn't chose Ender's Game. I chose The Ender Series.

Ender was born to fight in an intergalactic war against an alien species called Formics. He just didn't know he'd be leading it before he hit puberty. He also didn't realize it would end only after the total annihilation of a sentient species.

The empathy that allowed Ender to understand his enemy forced him also to love his enemy. Broken by the Xenocide, he refuses to settle in one spot. Instead, he travels in light speed from planet to planet, helping plant new human colonies across space. Along the way he finds a hibernating Formic egg. Because of the species' hive-mind, the little queen inside the egg is able to tell Ender the history of her entire species. Ender writes the history from conception to death, condemning himself for leading the Xenocide. The book gains popularity under the pseudonym "Speaker For the Dead".

Ender continues to travel at light speed. By the time the second book starts, he is only 30-years-old while thousands of years have passed for everyone on earth and the other colonies. Because of the Speaker's work, Ender's name is held in infamy. No one but the reader--not even Ender--knows the full truth of what Earth's military forced him to do as a child.

The series spins an interesting commentary on many aspects of humanity, from our failure to empathize and fully consider the consequences of our actions to the horrors of war and the drama of politics.  More than anything else, I think this is a great commentary on the human inability to fully understand all parts of history and the importance of trying, nonetheless.

Shelley penned this Victorian-era classic during the Industrial Revolution. She wrote it in part to be a Gothic tale of an experiment gone wrong, but her final product was more than that. It became an examination of human nature, our selfishness and our need to both create and destroy. It also became a depiction of class, as many novels of this era were.

Both America and England found themselves in the middle of severe changes during this era. Production increased, factories expelled smog, and social classes shifted.

Shelley's novel provides a vivid depiction of what such economic shifts feel like to the public and to science experiments.

Strategic Intelligence in National Security: The Hunt for Red October by Tom Clancy

Here we have a classic Cold War spy novel and the conception of American Intelligence agent Jack Ryan. This techno-thriller introduces readers to a world war machines and espionage.

Opening this book, readers will dive into the middle of America's race toward technological superiority against Russia, and the Soviets seem to be winning.  This choice is a little on the nose, but Jack Ryan is America's 007, and here we can read his first adventure.

What about you? What books do you enjoy most?
Let us know in the comments!