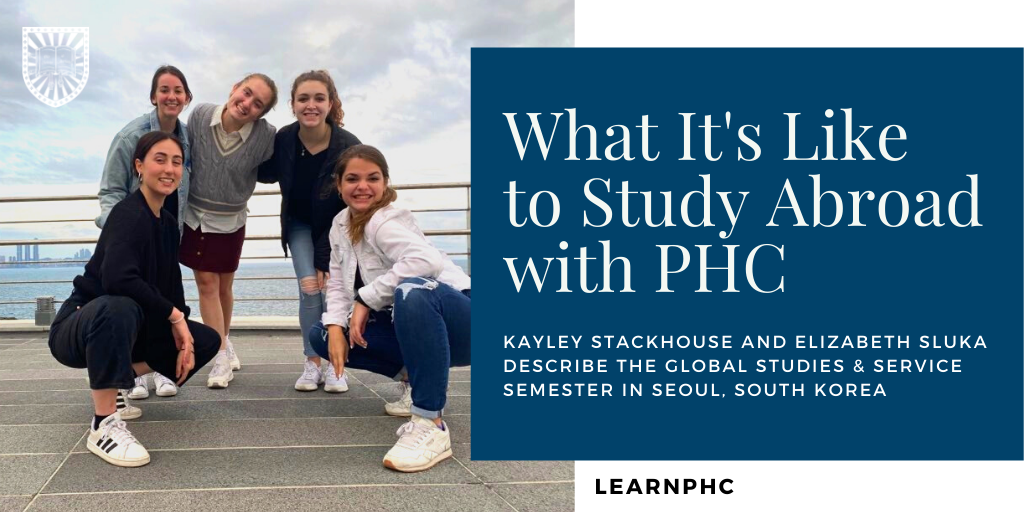 Have you ever thought about studying abroad in college? Kayley Stackhouse ('22) and Elizabeth Sluka ('21) were the first PHC students to study at Korea University in Seoul, South Korea as part of PHC's Global Studies & Service semester in Fall 2021. Here's what they say it's like and what to expect.

After PHC's rigorous training, academics at other universities are easier

Although Stackhouse was a little nervous walking into exams, she noticed that she was nowhere near as worried as her roommate and other students. "All my exams were essay formats and I thought, ‘this is a piece of cake,’ because I’d had essay formats before at PHC. With the diversity of [testing styles] that PHC has done, I felt really prepared.” Stackhouse said.

“Going to Korea University was a confirmation that I had truly received a stellar education at PHC,” Sluka added. “I interacted with students from other universities and realized that the levels of rigor and excellence we have here is honestly kind of rare. KU's academics were great and I learned a ton, but when it came to personal excellence, PHCers stood out to me.”

“PHC really prepared me in terms of excellence and working really hard, so when I went to Korea University, I almost felt like I had a break academically," Stackhouse said. "I had more time to really delve into class readings, presentations, and papers thought-wise than I did at PHC because so much is going on at PHC. At Korea University, I could catch my breath a little bit.”

You get to take unique classes PHC doesn't offer 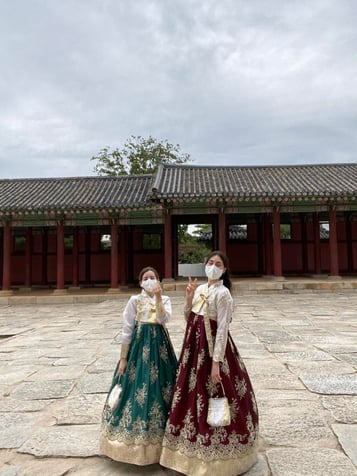 “[Human Rights in A Globalized World] was taught by the first Korean on the United Nations Human Rights Council, which was really cool. That class was basically about human rights and how they’ve expanded over the years,” Stackhouse said. "It was really cool to be able to go somewhere else and have a much broader list of classes that I could take . . . rather than grabbing at any class that comes along."

"It was amazing to take Korea-related classes in the country itself and hear the perspectives of Korean students and professors," she said. "That kind of insight and specificity just isn't possible at U.S. schools."

You learn from diverse life experiences

“I really enjoyed getting to know the other students, hearing why they were in Korea, and what their philosophical and theological ideas were," Sluka said. "We met people who were kindred spirits, in a way, where we connected on a very deep level regardless of whether we had similar political or spiritual beliefs."

PHC prepared both of them to have deep conversations and build relationships based on questions of purpose and human value rather than simply surface interests.

“I feel like PHC has really grounded me. I was able to think about things and make points in my classes where other students were like, ‘wait, yeah, that sounds right,’” Stackhouse said.

“After spending three years in an environment where everyone is very academic and takes the same classes, I appreciated going to a big university where students had widely different scholastic and life experiences," Sluka said. "The scope of perspectives on life was so large, particularly among other international students, because all of you are in a foreign country."

Before going to Korea, Stackhouse felt the Lord leading her to work with victims of sexual violence once she graduated. After returning from Korea and interning with International Justice Mission, she realized how much God has opened her heart for people in Asia who suffer from sexual violence now that she’s lived there.

“I can see God moving in small ways . . . there’s this entire region where that’s just a need,” Stackhouse said.

You reach a new level of independence

Due to South Korea's COVID-19 policies, Korea University classes were online for most of the fall semester. Stackhouse and Sluka took advantage of this by attending morning classes on campus, taking the subway to a new area of Seoul after lunch, and finding one of the city's many cafés to take their afternoon classes in after a couple hours of exploring. They even attended class from Jeju (the island off Korea's southern coast) while visiting friends one weekend.

"Kayley and I are both naturally independent people," Sluka said, "and studying abroad helped us learn to be creative with our situation and resources in order to make the most out of our time in Korea."

Committing to the journey is worth it

Both Stackhouse and Sluka highly recommend studying abroad junior or senior year. “It forces you outside of your bubble,” Stackhouse said. “It forces you to interact with different people. I think that’s really important and really healthy to step out of your environment completely."

"If finances are an issue, there are tons of ways to figure it out," Sluka added. She graduated a semester early and stuck to a budget while in Korea to balance the cost of studying abroad. “People should definitely do it,” Stackhouse said.

PHC offers study abroad opportunities in countries around the globe. Click below to learn more!