Politics and the human soul: thoughts from seniors studying political philosophy at PHC 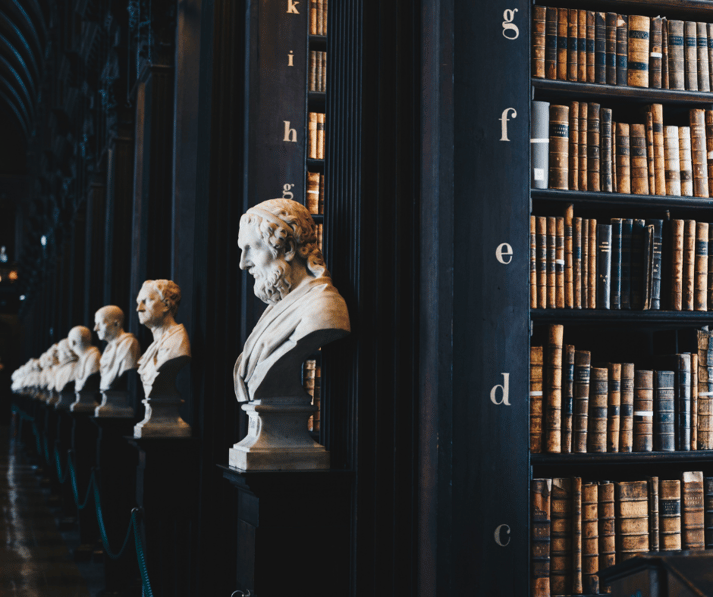 It was cramped and cold—the same position he’d been in for the last 22 hours. The blizzard in New York had made it very difficult for then-freshman David Modrovich and his mock trial team to get to Connecticut for their tournament.

David first learned about PHC at a college fair at his high school in California. He began his debate career competing for his high school mock trial team and hoped to continue it in college. After visiting PHC on Admitted Students Day, he learned that PHC has one of the nation's top pre-law programs, which confirmed his decision to attend.

Although he had chosen to come to PHC for its forensics reputation, he had not been enjoying mock trial as much as he had in high school. He came in expecting to still enjoy debate, just like he expected to major in Government in the American Politics and Policy (APP) track. Neither of these expectations were fulfilled. The friendships he found through debate and the passion he found for philosophy in the Political Philosophy track, however, made this senior’s time at PHC worthwhile.

Senior Edmund Hurty decided to come to PHC at 14 years of age. His mom heard about PHC and signed him up for one of PHC’s Teen Leadership Camps. After visiting campus in person and learning about its academic rigor and Christ-centeredness, Edmund chose PHC.

Senior Emma Shipe, however, did not initially want to come to PHC. An avid debater in high school, she was determined to attend a secular college and, through debate, convince the students there to adopt Christian-conservative views. Toward her senior year of high school, however, she realized that obtaining an education rooted in Christian values was more important than converting people at a secular university.

Shipe decided to major in Government in the American Politics and Policy (APP) track in order to prepare herself for her dream of helping people—and the entire U.S.—through law. “I felt like it didn’t click, though,” she said. During her sophomore year when she took Freedom’s Foundations, she studied philosophy for the first time and discovered a new passion. Before taking Freedom’s Foundations, Shipe had thought of philosophy as its own field, separate from other studies of life. That class changed her opinion of philosophy.

“After taking Freedom’s Foundations, I realized that philosophy bleeds into everything else,” Shipe said. By her junior year, she knew that the practical application of philosophy in politics was what she desperately wanted to study.

David also planned to study APP before he switched to Political Philosophy. Although he loved debate in high school, he was not as fond of it in college. After taking Dr. Matthew Roberts’ Ethics and Philosophy classes simultaneously, David knew he wanted to continue studying philosophy. “I love philosophy and metaphysics because it’s prior to every other aspect of learning,” David said. “It’s a pure dedication to truth.”

Since he was three years old, Edmund remembers being philosophically-minded and asking questions about man’s relation to sin and to God. His mother is a theologian with a  Ph.D. and has never shied away from his questions. Edmund finds the study of ethics the most compelling because it addresses questions about how to live a good life and how to make a good society.

Edmund's favorite course is Dr. Roberta Bayer’s Ancient and Medieval Political Philosophy because it focuses on the relationship between the human soul and politics. His favorite reading in the class was Dante’s Divine Comedy. Purgatorio was especially influential to Edmund because it fulfilled the ideas of philosophers Plato, Aristotle, Cicero, and Aquinas. The culmination of their thoughts produced the Purgatorio’s message that “suffering is inflicted for the purpose of ordering the soul away from sin” and the Paradiso’s message that love (or the law) “is written on everyone’s heart,” as Edmund puts it.

For David, his favorite classes were Metaphysics with Dr. Roberts and Ancient and Medieval Political Philosophy with Bayer. Metaphysics discussed the type of philosophy David is most interested in, while Bayer’s course forced him to read all of Dante’s Divine Comedy, for which he was grateful. He also loved that class because of how Bayer taught it. “She takes time to answer questions in class,” he said. “She genuinely loves reading Dante.”

Before coming to PHC, Emma didn’t have a strong idea of modern thought. Once she took Modern and Contemporary Theory, she felt like many of the gaps in her line of knowledge were filled. It gave her both a better grasp of why government acts the way it does and insight into where the government is headed.

After college, Emma plans to attend either graduate school or law school. Before she makes her decision, however, she plans to get married this summer. Though she’s not sure where God will take her, she’s thankful that PHC has made her future flexible.

Edmund is going to Georgetown University for a master’s degree in Security Studies—he hasn’t just majored in Government in the Political Philosophy Track at PHC, but also majored in Strategic Intelligence and minored in History. He thinks he might switch to politics in his midlife, but for now, he is tracking towards a future in international relations.

As a committed soon-to-be metaphysician, David hopes to teach metaphysics or modal logic in the future. Though he wants to work at a university, he thinks it is necessary for students to start learning about philosophy in high school, otherwise a young Christian might have a hard time knowing why he believes what he believes. Philosophy is the necessary foundation for everything else. “You need to know how reality works to be able to back your faith,” David said.