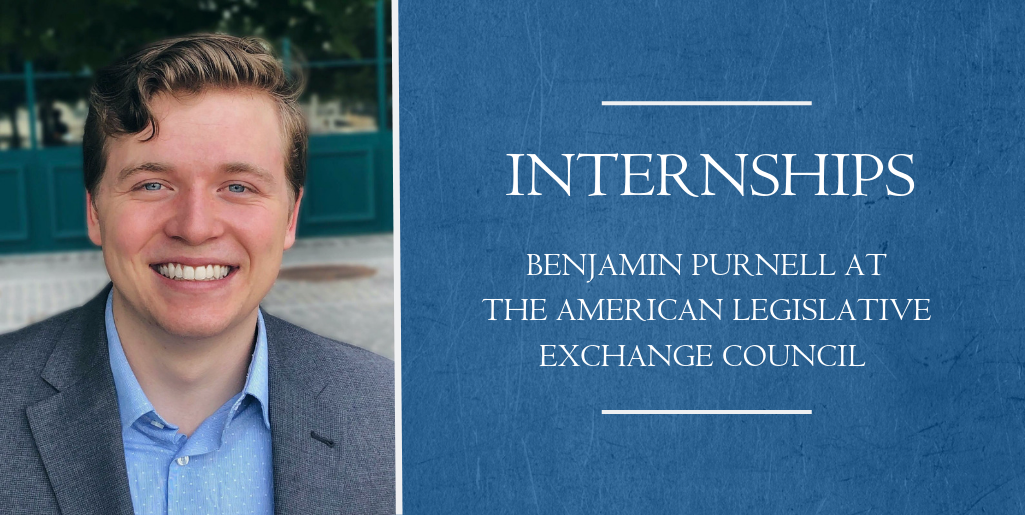 It’s an organization that focuses on policy and policy research, providing information and proposed legislation at the state and federal level. For Purnell, his time at ALEC is an experience that allows him to make connections in Washington D.C. and to continue opening doors to future opportunities. A large part of what makes this internship so effective is the networking prospects it presents.

His duties as an intern have him going to committee meetings all over Washington D.C., crossing paths with influential figures at every turn. It’s not unusual to meet weapon contractors and people working for the department of energy on what feels like a semi-regular basis.

“It’s kind of intimidating to meet people who are actually running the country,” Purnell said. “There are people here in charge of billion-dollar companies. But you get used to it eventually.”

It wasn’t too long ago that Purnell was waking up in a dorm-room, putting on a button-up shirt and going to class. And although he's retained the button-up, he now rides the metro to the Crystal City station and goes to work.

His official title is “intern” but once in a while he’s called the “research assistant.” That’s largely due to the nature of his work—he’s earned the title. In one week, Purnell recalls writing close to 40,000 words. The bulk of it was note-taking and summarizing committee meetings. Between the talks he’s listened to and the research he’s done, he’s learned a lot about the NATO alliance, foreign relations with Taiwan and China, the trade war, and how the United States' presence in foreign affairs influences the global setting.

There are a lot of students could hope for from an internship like this one. Purnell, in particular, hopes to make the most of experience in his personal development. He hopes his time at ALEC will grow him to be a better networker as well as a more proficient and capable worker overall. With two years left at Patrick Henry College, he still has time to evaluate what kind of career he would like to go into and what options are open to him. For now, he’s hoping his connections he’s built this summer will allow him to perhaps work with the Heritage Foundation next summer.

Like every other student at Patrick Henry College, Purnell is fulfilling his internship requirements to graduate. The leadership at PHC seeks to equip every student with practical experience in the workplace. This means that even before entering the workforce, every Patrick Henry student will already be pragmatically versed in some internship relating to their major. And because PHC is only 40 minutes from Washington D.C. this is one of the college’s greatest strengths.

Students like Purnell have interned at places like Fox News, The White House, the Heritage Foundation, and many other locations on the Hill. Purnell is only the latest in a long line of PHC summer interns. His connections at ALEC strengthen Patrick Henry College's reputation in the area and pave the way for students down the road.

“It’s called the biggest small town in America for a reason,” Purnell said. “It’s an extremely well-connected city. You run into people over and over.”

As Purnell gets ready to wrap up his internship and begin a new school year, he will bring with him a whole new set of experiences and perspectives on what he can do and achieve.

Patrick Henry College exists to glorify God by challenging the status quo in higher education, lifting high both faith and reason within a rigorous academic environment; thereby preserving for posterity the ideals be

hind the "noble experiment in ordered liberty" that is the foundation of America.