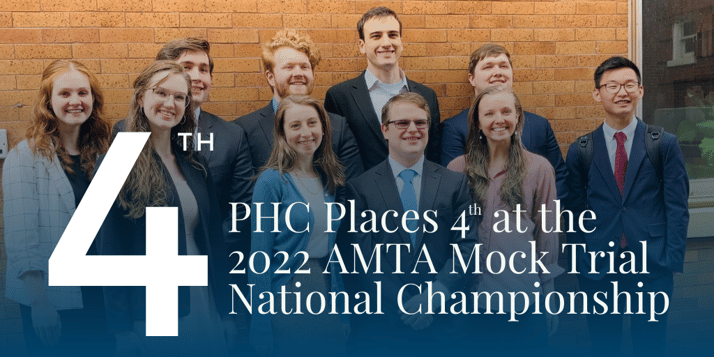 Team 1014 (Amber) finished 4th in their division with a record of 7–4–1. Their Competition Strength (CS) was second highest in their division; only the eventual champion, Harvard University, had a higher CS. Team 1014 was the only team to take a ballot away from Harvard during the preliminary rounds. Team 1014 was captained by David Bainbridge and Benjamin Crosby; the remaining team members were Ashton Cho, Audrey Millhouse, Beckett Millhouse, Caleb Knox, Lauren Rule, and Trinity Klomparens.

These students represented the College and the Lord with excellence, integrity, and professionalism. They supported and uplifted each other with humor and encouragement the entire weekend.

Special thanks to Director Sue Johnson and the outstanding alumni coaches, Elizabeth Ertle, Kyle Ziemnick, Cooper Millhouse, and Sam Johnson. Their encouragement, guidance, and insights were key to the students’ success. Thank you also to those who lifted the teams up in prayer.

PHC graduates have an unparalleled track record of success in debate, law, and government. Alumni have become state solicitor generals, argued before the Supreme Court of the United States, served in the White House in various capacities, and more.