A 2008 graduate of PHC, Peter Kamakawiwoole and his partner, Sarah Wilson, won Patrick Henry College’s first Moot Court national championship in 2005. He went on to study law at Saint Louis University School of Law, returning to the area as a member of the litigation staff at the Home School Legal Defense Association in 2011. As an HSLDA attorney, Peter has represented homeschooling families before state and federal tribunals across the nation. For the past eight years, he has played a major role in preparing PHC teams for national moot court tournaments. Peter is incredibly grateful for an opportunity to give back to the PHC Moot Court program, which was so formative to both his college and professional life.

Graduate of the self-proclaimed legendary class of 2010 and a veteran of the PHC forensic teams, Ben Sayre participated in Team Policy and Crossfire Debate, Mock Trial, and Moot Court. With a primary focus on Moot Court, he qualified for the AMCA national tournament and advanced to the elimination rounds each of his three years on the team, winning first place Petitioner Brief in the nation his sophomore year. Ben has also helped coach high school Moot Court during PHC summer camps. Unlike many of his former teammates, he was one of the few to forgo law school; instead, Ben pursued a career as an intelligence analyst and is currently working for the cybersecurity company FireEye.

After graduating from Patrick Henry College in 2010, Jenna Lorence worked with students on public college and university campuses to help protect their First Amendment rights. She went on to study law at Washington & Lee University, where she credits her success in moot court and mock trial to the training she received at PHC. While at PHC, Jenna and her partners won the Western Regional, Eastern Regional, and National Championship tournaments of the American Moot Court Association, and she also participated on the school’s inaugural mock trial teams. She is excited for this opportunity to give back to the PHC community as a volunteer moot court coach. Jenna currently works as an associate in the Appellate and Major Motions Group at Baker & Hostetler, LLP in Washington, D.C.

Ryan McDonald received his B.A. cum laude from PHC in 2016. He was an active participant in collegiate Moot Court, Mock Trial, and British Parliamentary Debate, where he repeatedly represented each branch of PHC forensics at the national level. In 2019, Ryan completed his J.D. at George Mason University’s Antonin Scalia Law School, where he twice represented the school at the American Bar Association’s National Appellate Advocacy Competition and won both of the school’s intra-school appellate advocacy tournaments. He was an active member of the George Mason Law Review and spent time working as a legal assistant among multiple private firms and federal agencies before graduation. Ryan invests in undergraduate, high school, and law school forensics by judging and administrating tournaments, coaching high school mock trial, teaching at debate summer camps, and mentoring individual students where possible. He now serves as an Honors Attorney for the Federal Communications Commission in Washington, D.C.

Tyson Langhofer serves as senior counsel and director of the Center for Academic Freedom with Alliance Defending Freedom. He has represented college students and student organizations throughout the country in defending their freedom of speech, freedom of association, and free exercise of religion. Before joining ADF, Tyson was a partner with Stinson Leonard Street LLP, where he worked as a commercial litigation attorney for 15 years and earned Martindale-Hubbell’s AV Preeminent rating. Numerous media outlets have interviewed or featured Tyson, including The Washington Post, The Washington Times, Townhall, The Federalist, and The Daily Wire. He obtained his B.A. in international business with a minor in economics from Wichita State University prior to earning his J.D., cum laude, from Regent University School of Law.

Aaron Kamakawiwoole graduated from PHC in 2011. He participated with the PHC Value Debate team and Moot Court team in college, qualified for nationals all four years in Moot Court, and won First Place Petitioner Brief in 2009. In his senior year, he had the privilege of being the Moot Court Team Captain during the controversial "Gay Marriage and Affordable Care Act" case of 2010-2011. After graduation, Aaron served for seven years recruiting students for PHC, specializing in recruiting debaters due to his past experience in forensics. He now works as a Salesforce Administrator for Freedom Alliance, a non-profit veterans’ organization that provides sixteen forms of mercy ministry and political advocacy on behalf of veterans. Aaron also teaches the PHC Teen Debate Camp each summer, drawing on his six years of experience in NCFCA and STOA Debate, as well as over ten years of coaching and judging for high school debate.

Elizabeth Ertle graduated magna cum laude from Patrick Henry College in 2015. Elizabeth went on to earn her J.D., with Honors, from the University of Chicago Law School in 2018. While there, she was a semifinalist in the Hinton Moot Court competition and subsequently served as co-chair of the Hinton competition. Elizabeth was also the Executive Articles Editor for the University of Chicago Legal Forum. At PHC, she participated in mock trial all four years, captaining a team and competing on the team making the school's first appearance at the AMTA National Championship Tournament. Elizabeth also competed in moot court, advancing to elimination rounds all three years at the AMCA National Championship. Elizabeth is excited for the opportunity to give back to the PHC Forensics Program by serving as a volunteer mock trial coach. She currently works as an Associate at Covington & Burling LLP in Washington, D.C.

Mackenzi Ehrett graduated from Patrick Henry College in 2012 prior to earning her J.D. magna cum laude from the Antonin Scalia Law School at George Mason University. While at PHC, Mackenzi competed in mock trial for three years, serving as a team captain her junior and senior year. In 2012, her team qualified to ORCs, marking the first time that PHC advanced two teams to the super-regional level. Mackenzi was also a member of PHC’s Moot Court teams from 2009-2012, winning national and regional awards for both oral advocacy and brief writing. After graduating from PHC, she coached a high school mock trial team to five Virginia state championships, five national appearances, and international runners-up. Mackenzi has served on mock trial case writing committees at the high school, collegiate, and law school level and was a founding member of the of the NCFCA Moot Court committee. She is glad for the opportunity to share her expertise with PHC students as a volunteer mock trial coach. Mackenzi currently serves as Deputy Associate Counsel to the President of the United States in the White House Counsel’s Office.

Sam Johnson graduated summa cum laude from Patrick Henry College in December 2014, going on to earn his J.D., with Honors, from the University of Chicago Law School in 2018. At UChicago, Sam was a finalist in the Hinton Moot Court competition and Topic Access Editor and Comments Editor for the University of Chicago Legal Forum. During his time at PHC, he captained PHC's mock trial team for four years, including to the school's first appearance at the AMTA National Championship Tournament. Sam also competed in moot court, advancing to the elimination rounds at nationals all four years and earning recognition as a national semifinalist twice. He looks forward to serving as a volunteer mock trial coach at PHC. Sam currently works as an Associate at Quinn Emanuel Urquhart & Sullivan, LLP in Washington, D.C.

Shane Roberts graduated from Patrick Henry College in 2018 and is now a 3L at the George Washington University Law School, where he serves on the Mock Trial and Moot Court Boards. At GWU Law Shane and Ashlyn recently teamed up to win the Van Vleck Constitutional Law Moot Court Competition, the first married couple to do so in the competition’s 70-year history. At PHC, Shane competed in both mock trial and moot court all four years. He was a two-time national semi-finalist in moot court and captained PHC’s top mock trial team, leading them to the Opening Round Championship Series (ORCS). In the summer of 2020, Shane will work as a summer associate at Wiley LLP in Washington, DC. He plans to work for a DC firm after graduation and will clerk for Judge Paul Matey on the U.S. Court of Appeals for the Third Circuit in 2022.

Ashlyn Roberts graduated from Patrick Henry College in 2016 and is now a 3L at the George Washington University Law School, where she serves on the Mock Trial and Moot Court Boards. She competed in both mock trial and moot court at PHC, winning numerous oral advocacy and brief writing awards, and culminating in second place at the 2016 AMCA National Championship. After graduation, Ashlyn returned to help coach PHC’s mock trial and moot court teams for two years, during which time PHC won both National Moot Court titles and numerous mock trial awards, earning a slot to the AMTA National Championship in 2018. In the summer of 2020, Ashlyn will work as a summer associate at Wiley LLP in Washington, DC. She also plans to work for a DC firm after graduation and will clerk for Judge Paul Matey on the U.S. Court of Appeals for the Third Circuit in 2022. Ashlyn and Shane are excited for the opportunity to serve as volunteer mock trial coaches at PHC.

A senior at Patrick Henry College studying Government, Samuel Zinkgraf competed in mock trial and moot court for three years. He served as a mock trial team co-captain last season, earning recognition as All Region Attorney and helping his team earn a bid to the AMTA Opening Round Championship Series. Samuel also competed in moot court, qualifying twice to the national championship and reaching the final round of the Regional tournament at Liberty University. He is grateful for the coaching he has received at PHC and appreciates the opportunity to give back to the Forensics program as a volunteer coach for mock trial.

A 2020 graduate of Patrick Henry College with a degree in Political Journalism, Kyle Ziemnick competed in moot court and mock trial all four years. He served as mock trial team co-captain two years, earning recognition as an All-American Witness at the 2019 AMTA National Tournament while contributing to the team’s Fourth Place finish. Kyle also excelled in moot court, winning the Mid-South Regional moot court tournament at Liberty University his junior and senior years and advancing to elimination rounds at Nationals three years in a row. He is grateful for the opportunity to give back to the Forensics program as a volunteer mock trial coach, helping other students to develop critical thinking and communication skills. 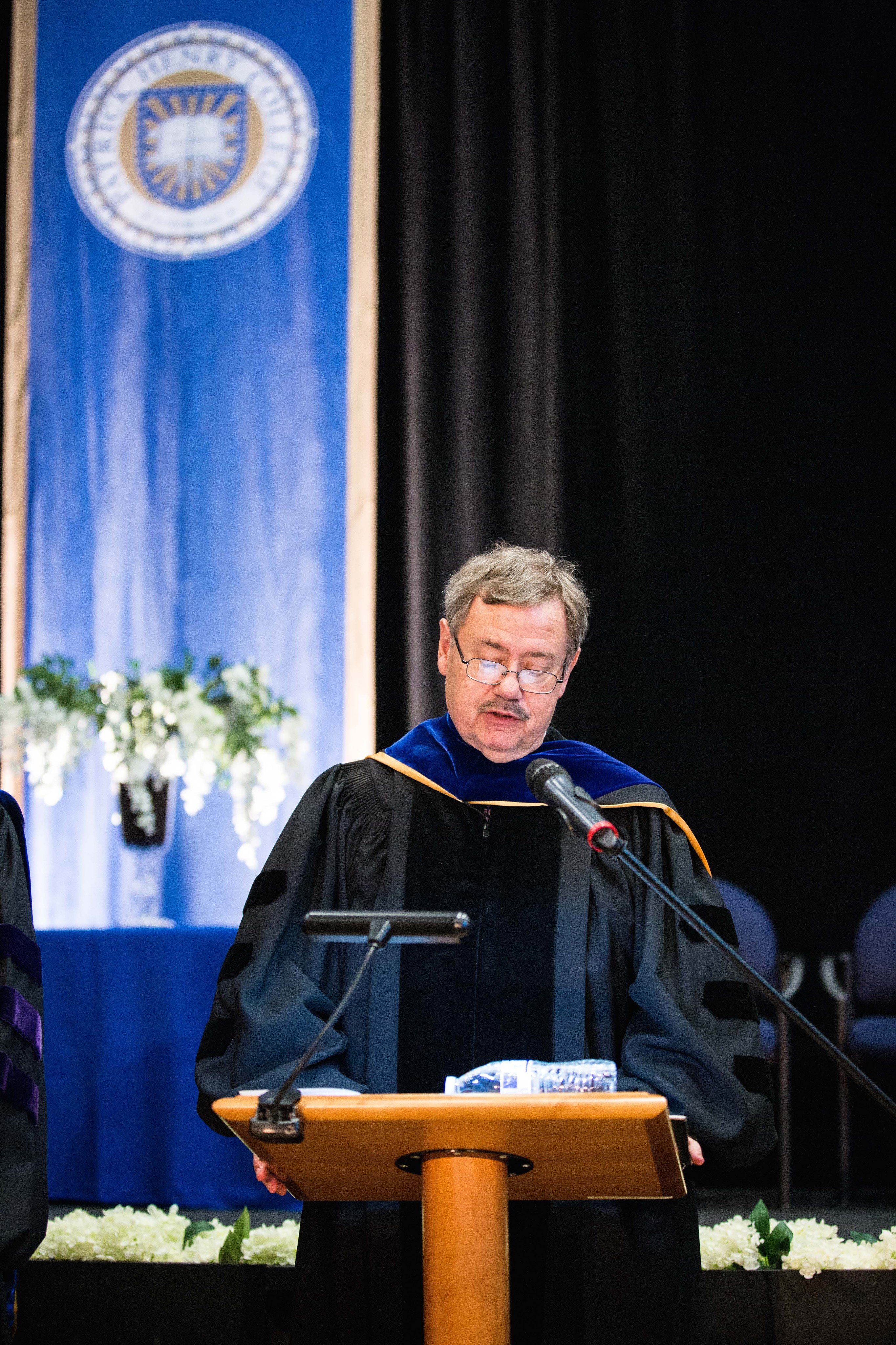 Dr. Guliuzza "Dr. G" left an indelible legacy with the Patrick Henry College community. During his time at the College, he co-coached ten American Moot Court Association national championship teams (2009, 2010, 2011, 2012, 2013, 2014, 2016,  2017, 2018, and 2019).  He was the immediate past President of the American Mock Trial Association, and was the past President of the American Moot Court Association. Dr. G also coached nineteen mock trial teams into national competition.  He was a former President of the Western Association of Pre-Law Advisors and the Pre-Law Advisors’ National Council.  His pre-law students have earned admission, typically with scholarship or other financial support, at dozens of top tier law schools including Harvard, Columbia, and Yale. Dr. G passed away in his sleep on February 26th, 2019. In the words of PHC President Jack Haye, "At this moment, he is in the presence of the LORD and probably reflecting on his Sunday’s Comin’ sermon. Sunday did come for 'Dr. G.' Hopes beyond hopes fulfilled. A life fully lived for God’s Glory."  Click here to visit his legacy page.