PHC Mock Trial Is In Nation's Top 12 After Championship Tournament 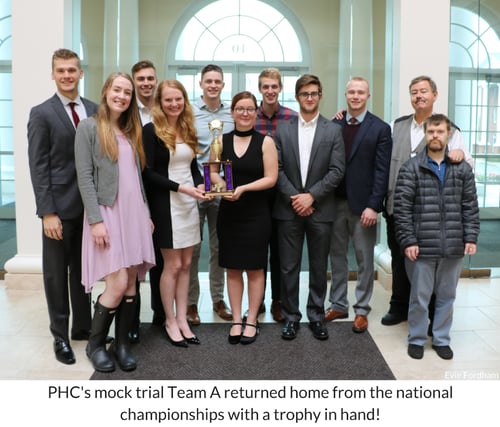 Patrick Henry College’s mock trial team started its season as one of more than 700 college teams striving for excellence; by the final day of the American Mock Trial Association’s 2018 championship tournament on April 22, the team could count themselves among the best 12 teams in the nation.

“This was a benchmark tournament,” mock trial coach Dr. Frank Guliuzza said. “We’ve sent teams to the championship tournament before. They’ve always been on the cusp of earning a trophy or winning All-American awards. This time, those things actually happened.” 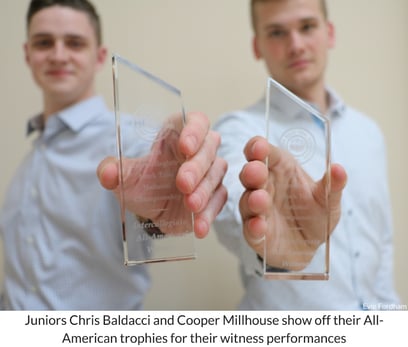 “Witnesses have to be as smart as the attorneys because they have to advance their team’s strategy by testifying to the right things in the right ways,” Baldacci explained. “Cooper’s really good at that, and I learned from him and a lot of people.”

“The round against Yale’s A team was a good round,” Dr. Guliuzza said. “We ended up picking up two and a half of the three ballots. We were very good, and the judges saw that.”

The stellar performance at nationals by PHC came after they won the Opening Round Championship Series in Delaware in March, qualifying the team for the final tournament.

Miami University of Ohio won the championship this weekend by defeating the runner-up, Yale’s B team.

Most of PHC’s team has been working together since 2016, and the championship tournament was bittersweet. 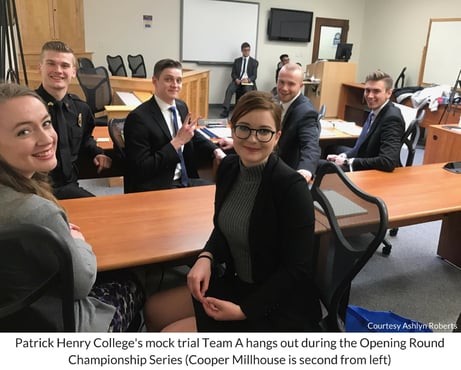 “It was a really emotional trip because of how much time all of us have spent together — two whole years of working insanely hard on this,” Baldacci said. “It was weird to have it all come to an end but I was really proud of the way everybody finished.”

The team lost their chances of winning after the second round but they continued to give their all in the remaining two rounds, Baldacci said.

“We came with goal of winning, and we thought we had what it took to win,” he said. “In our last two rounds, we competed harder than we did in the first two and finished stronger than we started. That speaks to how much we care about the activity, how much we love each other, and how much we really cared about being excellent all the way to the finish line.”

Like Dr. Guliuzza said, it was a “benchmark” moment for PHC mock trial.

“It was a good season,” the coach said. “Now we set the benchmark higher.”

Do you know that participating in forensics can benefit students in areas from academics to friendship? Learn more by clicking the button below: