Here are three things that you should know about preparing to be a lawyer:

First, a good pre-law program will help you know the arguments. Knowing all facets of an argument and the precedents already established will help you showcase well on the LSAT and you'll stand out among your peers seeking acceptance into selective law schools.

Secondly, pre-law advising isn't an academic major; it’s a program that prepares you to think clearly and speak persuasively. You enter the pre-law advising program alongside your other studies—often in government.

Thirdly—and most importantly—if you want to go into law, PHC’s pre-law program is among your top choices in the nation to prepare you.

PHC has an entirely Christian faculty and staff too. It's imperative that tomorrow's lawyers know how to defend what is good, what is true, and what is beautiful.

The Law School Admission Test, more commonly known as the LSAT, is notorious for being one of the most trying assessments in the professional world and is the gateway to a legal career. To begin practicing law, you need a degree from a law school. And in order to get into a top law school, you have to do well on the LSAT. It might sound simple, but it’s no small feat.

Pre-law students looking to perform well on the LSAT will train up to several months—taking hours each day to analyze the complexities of the test. Test day might be a five-hour all-out sprint, but the road that leads to it is nothing short of a marathon. Doing well on the LSAT often requires hundreds of hours of preparation and dozens of practice trials. A good score could mean an acceptance letter from the school of your dreams. A bad score could set a career back years. 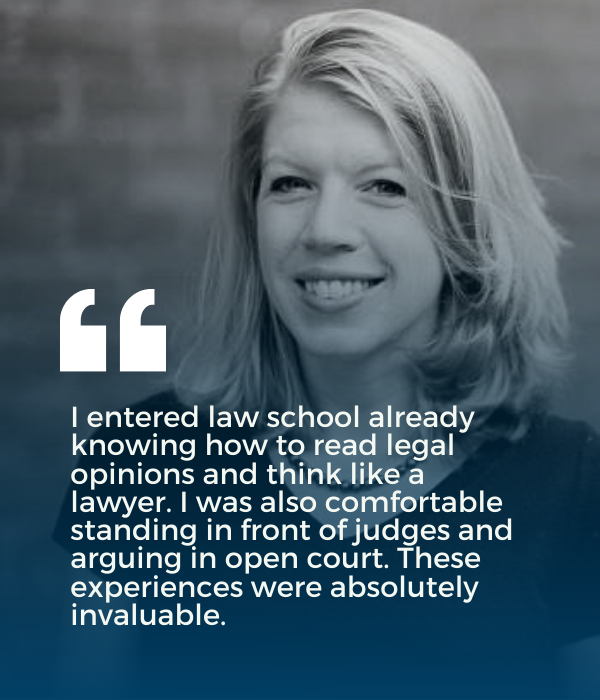 Pictured above: quote from Holly Slon, a graduate of the PHC class of 2009

In 2019, PHC students earned an average of 167.6 on the Law School Admission Test (LSAT)—which means our students, on average, test in the 95th percentile in the nation. According to College Confidential, in 2017, for all test-takers, the Yale average was 167.5, the Harvard average was 167.4, the Princeton average was 166.1, and the PHC average was 164.4. Patrick Henry College students' performance on the LSAT places the College's Pre-Law advising program among the top in the nation.

In addition to preparing students for the LSAT, PHC’s pre-law students compete in Mock Trial and Moot Court.

The Mock Trial program prepares students to enter the worlds of both civil and criminal trial advocacy. Students develop knowledge of the federal rules of evidence, courtroom procedure, witness examination, case-building, and more. PHC Mock Trial teams are consistently in the top 5% in the nation—competing against more than 700 teams from 400 schools, including the nation’s top ivy-league institutions. Fierce competition hones their critical thinking skills and equips them to clearly articulate passionate and well-reasoned legal arguments.

The Patrick Henry Moot Court Team has won an unprecedented 12 national titles in 15 years in the American Moot Court Association.

Competing in these activities, often referred to as “forensics debates,” looks good on a law-school application and often prepares students for the real-life challenges of law school in very practical ways. One alumna, Holly Slon who graduated from PHC in 2009, had this to say about her time as a forensics competitor:

“Moot Court is the single most beneficial experience for anyone contemplating law school. Thanks to Constitutional Law and Moot Court, I entered law school already knowing how to read legal opinions and think like a lawyer. I was also comfortable standing in front of judges and arguing in open court. These experiences were absolutely invaluable.”

If you’re interested in pursuing a career in law and you’d like to read more about our pre-law program and what it does for our students, click below!