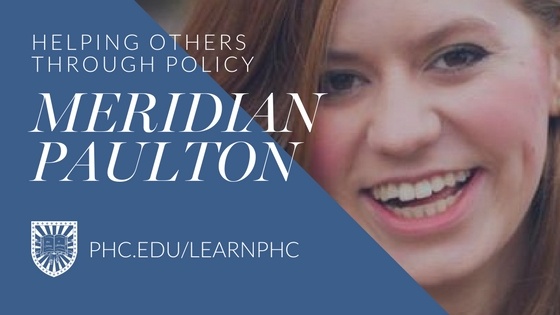 “You must be named for the radical feminist novel 'Meridian,'” Gloria Steinem said to teenage Meridian Paulton. “Thank you for standing for feminism.”

Paulton didn’t bother telling Steinem before the taping of the show Nick News with Linda Ellerbee that she was a strong conservative and that she did not stand for what Steinem thought, but the older woman would soon find out.

Nickelodeon called Paulton one day to ask her to air on a 2013 episode of Ellerbee’s popular educational show aimed at children and teens.

About a month later, Paulton traveled to New York City to join nine other high schoolers — two of whom were conservative like her — along with Ellerbee herself and feminist icon Steinem. The group met at the studio for a taped discussion on the history of women for the episode titled “Are We There Yet? Women’s History, Past, Present, and Future.”

The three-hour debate was intense, Paulton explained. She was much more outspoken then than she would be now, taking up points that she would now choose to let pass.

When the debate came to a close, each guest chose one woman they looked up to.

“A lot of the girls said their moms or whatever female political leader. “I said, ‘Gloria Steinem, because she doesn’t back down.’”

When Steinem’s turn came around, Steinem said, “Meridian Paulton, because she doesn’t back down.”

“We had a nice moment and high-fived,” Paulton said. 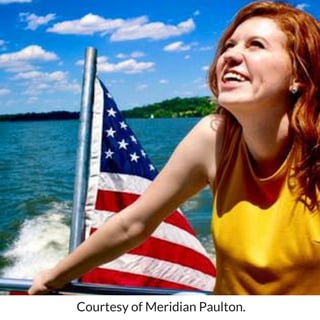 Five years later, Paulton has found herself working full-time for the Heritage Foundation and training for television and radio interviews.

The American Politics & Policy student began as an intern for Heritage last summer. When a case on children’s healthcare came up that no one in the office had time to write on, her coworkers asked Paulton to get the paper started. Originally, they planned to have Paulton form an outline and hire a contractor to write the paper based on the outline. However, Paulton turned in an outline that impressed her supervisors so much, they asked her to continue working for them part-time through the fall semester so she could write the paper.

Though working part-time on top of earning her degree was incredibly stressful, "I kind of enjoyed having two lives,” she said. She explained how she was feeling the effects of “senior-itis” and was looking forward to starting her full-time career.

At the end of what was supposed to be Paulton’s second-to-last semester on campus, the Heritage Foundation offered her a full-time job. Paulton was forced to make a decision: should she stay on campus and take one class in order to continue her duties as a resident assistant and continue competing in mock trial? Or should she start her career a few months early? When everything fell into place — she found housing with PHC alumni — she decided to leave her wing in the hands of junior Kara Brown and depart campus early.

Paulton always imagined herself either working for Heritage or working on the Hill trying to get into Heritage after graduation. She was able to chase her dream a semester earlier than she thought.

"I am a professional paper writer,” Paulton said.

She works in the health and welfare department, writing on Medicaid issues.

"PHC prepared me more specifically for my job now than I ever thought it would,” she explained.

Because she’s constantly researching and writing on political topics, she said, “Political Science Research Methods is what I do every day.”

Paulton’s favorite part of the week is her meeting with the media coach, who is training her to be ready for radio and on-screen interviews. Every Wednesday her coach conducts mock interviews on healthcare and similar topics that Paulton may have to cover.

"My favorite part of job applications is the interview,” she said. She discovered this about herself in high school when she was a part of Nick News as well as a few lobbying events.

In June, Paulton plans on taking the LSAT. From there, she will decide whether or not she wants to pursue a career in law. No matter where she goes, whether she pursues law or continues writing policy, she wants — more than anything — to help people.

This story was originally published in PHC's student newspaper, The Herald. To read more about what PHC grads are up to, click the button below!