The following is an essay submitted by former PHC RD, Stephen Williams.

I first encountered Marilynne Robinson’s Gilead when I was a senior at Patrick Henry College. And by encountered, I mean I promptly dismissed it as one of many boring books about hearth and home that my Political Theory Major friends were reading. Clearly I had a ways to go in learning both wisdom and humility.

Three years later, however, I had grown enough in the aforementioned virtues to pick up the book at the suggestion of a friend, and I’m guessing that anyone reading this article is expecting me to now exclaim about how it radically changed my life. It did not – at least, not immediately. Though I found the book profoundly beautiful in the initial reading, it was long after I had turned the last page that I discovered it to also be profoundly wise. Indeed, a good six months had passed before I began to realize just how deeply that wisdom had begun to seep into my daily consciousness. Now, after four years and two more trips back to Gilead, I have yet to find another book to make a similarly poignant impression when discussing themes of fatherhood, forgiveness, and the incandescent beauty bound up in a quiet life lived before the face of God.

I’m guessing that anyone reading this article is expecting me to now exclaim about how it radically changed my life. It did not – at least, not immediately.

The book’s central character, John Ames, is the elderly pastor of the Congregational church in the fictional town of Gilead, Iowa, and the novel takes the form of a letter written to his young son, born late in Ames’ life after an unexpected marriage in his waning years. Ames has terminal heart disease, but it would be an injustice to call the letter a farewell in the strictest sense of the word. Rather, it is equal parts memoir, prayer, and valediction. It is, in a certain sense, a father’s once-and-for-all attempt to lovingly encourage his son to “pay attention”.

To this end, Robinson portrays Ames as a man who has developed an extraordinary eye for observing the miraculous amidst the rhythms of ordinary life. At various points throughout the book, Ames will comment on previously humdrum or assumed phenomena with such tender care that they will then light up with sempiternal clarity.  Nowhere is this tender awe more evident than in the manner with which he speaks about his wife and his son. To the latter, he says,

"I'm writing this in part to tell you that if you ever wonder what you've done in your life, and everyone does wonder sooner or later, you have been God's grace to me, a miracle, something more than a miracle. You may not remember me very well at all, and it may seem to you to be no great thing to have been the good child of an old man in a shabby town you will no doubt leave behind if only I have the words to tell you."

But included in Ames’ letter to his own child are his wrenching reflections over how it is that he should love his godson Jack Boughton, the beloved yet inconstant prodigal of his best friend, recently returned to Gilead after a long and mysterious absence. Ames’ heart is remarkably tender toward all but Jack, and the tension of his struggle to forgive Jack is a compelling foil that spans the length of the book. Jack is a perfect storm to test the consistency of Ames’ already significant faith, and the honest intensity of the old man’s subsequent wrestling is one of the most gripping components of the novel. Furthermore, this wrestling inspires a humanizing yet convicting empathy in the heart of any reader who has known the pain of the scalpel applied to the roots of long-held injury and bitterness. Through Ames and Jack, Robinson re-imagines the prodigal son narrative in ways that illuminate and magnify the true wonder of the original parable.

Jack is a perfect storm to test the consistency of Ames’ already significant faith...

It occurs to me that Gilead is a book-long exposition of the art of slow-looking. It is an invitation to dispense with much of the clamor in our modern lives and instead behold Creation and Creator through lenses of humble, honest wonder. Robinson’s unassuming yet careful prose beckons the reader to pause and consider what Ames terms “the miracle of existence”, borne out in the face of a child, or through a sudden downpour, or in Communion taken amidst the ruins of a smoldering church. In its essence, Gilead is a call to a very specific kind of courage. In the words of Ames,

“Wherever you turn your eyes the world can shine like transfiguration. You don’t have to bring a thing to it except a little willingness to see. Only, who could have the courage to see it?”

If you enjoyed reading this article, check out our Political Theory program below... 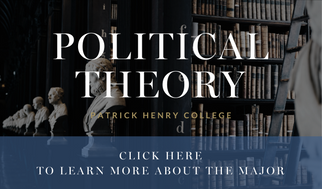