Finding Your Way Around Washington, D.C. 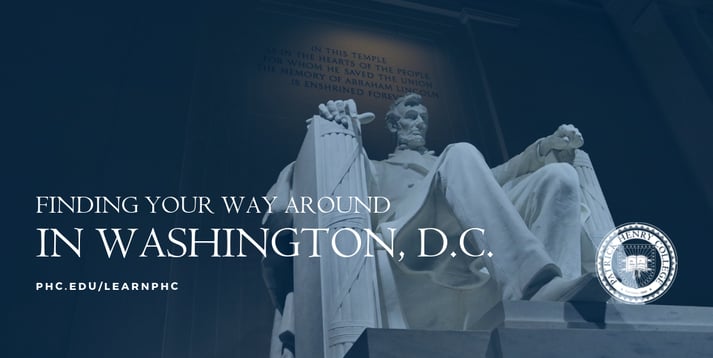 Washington, D.C. is one of the greatest, most powerful cities in the world, and it’s a great place to visit. For students at Patrick Henry College, the Hill, as it’s commonly called, is just a forty-five minute drive away and an excellent internship resource. But just like any other city, if you aren’t particularly familiar with your surroundings, it's easy to get lost.

Here’s a couple landmarks that you can use to find your way around our nation’s capital.

The Washington Monument is, without a doubt, the most visible part of the city. Standing at 555 feet, the Washington Monument towers over the Capitol Building and is 200 feet taller than the Statue of Liberty. It’s a simple, white obelisk that marks the heart of the city. What many might think of it as the “white pencil” in the skyline, is actually a monument to the nation’s first president. 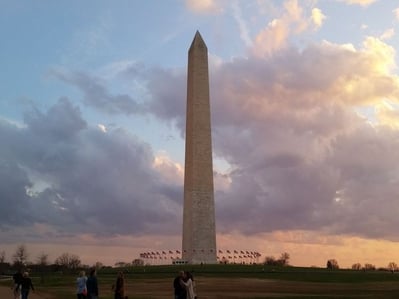 Back in 1783, the Continental Congress decided that a monument would be built to honor the famed General and his remarkable sacrifice and contribution to the birth of the United States. When the decision to build it was made, Washington was still alive. That’s why it’s called the Washington Monument and not a memorial, even though construction wouldn’t begin until 1848—49 years after the general’s death.

The Washington Monument is the center of the city, standing halfway down the National Mall. The Mall, in turn, is a long, narrow strip of land that gives the city a sort of hallway layout that stretches from east to west. On the eastern end of this “hallway” is the Lincoln Memorial. On the other extreme is the Capitol Building. 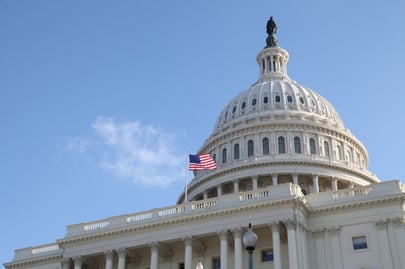 The Capitol, the massive white structure where presidents first take office, is the symbol of the American political system. The building represents the function of the world’s greatest democracy and a system of government made for and by the people. It’s most famous for its magnificent, white dome that’s so closely associated with images and the ideas of the city itself. If you find yourself at the Capitol, you are in the eastern part of the city. If you continue beyond the Capitol, you’ll find yourself at the Supreme Court and the Library of Congress. If you go beyond those, you’ll find yourself in mostly commercial and residential areas.

The Lincoln Memorial stands at the opposite end of the National Mall. If you’re entering the city through the east, over one of the bridges on the Potomac river, it’s probably one of the first buildings you’ll see. Situated right on the edge of the river, it’s a long, rectangular building, supported by massive white pillars and adorned in white marble. Inside, the towering figure of Abraham Lincoln sits, watching over the capitol. 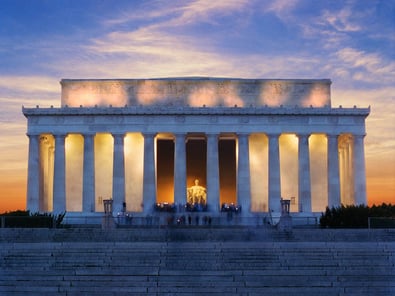 If you venture inside, you'll find Lincoln’s "Second Inaugural Address" inscribed on the walls of the building . It’s reminiscent of a Greek temple, a shrine to ideas worth remembering and an extremely popular tourist attraction. If you look out from the balcony of the Lincoln Memorial, you’ll see the World War II Memorial, and beyond that, the Washington Monument. If you’re at the Lincoln Memorial, you are at the western boundary of the city.

The Rest of the City

Washington D.C. is far larger and more complex than these three landmarks. If you’ve never visited Washington before, they can provide a few points of orientation, but the city sprawls far beyond them. Make sure to have a fully-charged phone or a map if you’re going to venture to the National Cathedral in the north-west sector of the city or down to the far south-east limits of the district. It’s a city full of places to explore.

Click here to learn about how students at Patrick Henry College make use of being so close to the Nation's Capitol.