The Benefits of a Small Campus 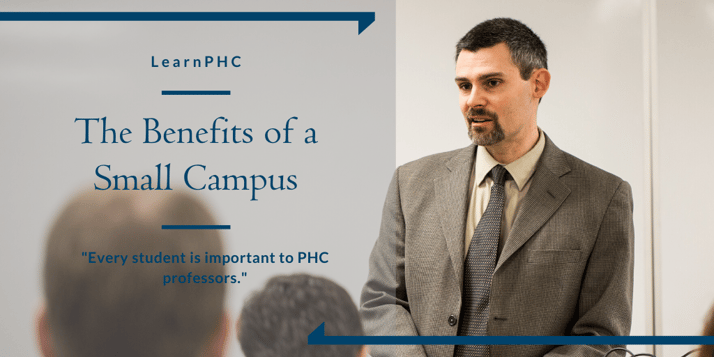 When I was looking at colleges in high school, I knew I wanted to go to a small school. I visited a few larger schools, and they didn't appeal to me. I didn't like the idea of being just a number or known only by where I sit in the classroom by my professors. I didn't want to be swallowed up in a lecture hall with hundreds of other students, or to barely know the faces of the people around me—much less their names or stories.

I chose PHC, the smallest of all the schools I applied to, and it was the best decision.

Entering Patrick Henry College, having chosen the Political track of the Journalism major, I had already spoken to Dr. Sillars, the head of the program, multiple times. I had visited a few of his classes and I knew what he expected from me.

As a prospective student, I once had lunch with Assistant Professor of Literature Dr. Grewell. Though he was unsuccessful in convincing me to switch my intended major to Literature, I took note of his colorful style. It's an aspect he's well known for around campus.

Most of my professors in my freshman year knew my name by the end of the second week of school.  They all greeted me with a smile when our paths crossed in the hallway or the dining hall. I never had to worry about squeezing a meeting in during their office hours, because there simply weren't enough students to monopolize the professors' time. If, by some chance they were busy, most made it clear they would work with students to find time. Every student is important to PHC professors.

Though I haven't taken a class with Professor of History Dr. Spinney since U.S. History in my freshman year, he still greets me by name and with a smile every time our paths cross.

Even professors whose classes I saved until senior year knew me by the time I sat in their classroom. With a campus so small, it's harder to stay unknown than it is to be known. Everyone eats in the same dining hall and worships in the same chapel. When you see the same faces every day for four years, it's hard not to get to know the people around you.

It's similarly difficult not to care about the lives of the people you see every day. When I graduate, I know I will be missed not only by my friends but also by my professors, and when I graduate, I will be proud to tell people that I graduated from a campus overflowing with love.

Patrick Henry College challenges the unacceptable status quo in higher education by combining the academic strength and commitment to biblical principles that elite institutions have lost; a commitment to high academic rigor, fidelity to the spirit of the American founding, and an unwavering biblical worldview.