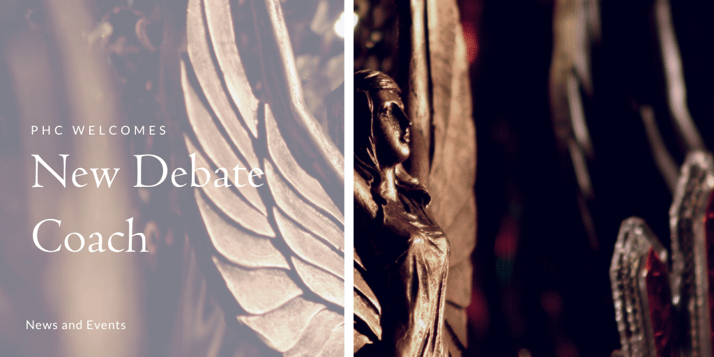 We are thrilled to announce that PHC Alumnus Ryan McDonald has accepted the call to serve as our new head coach of the debate program. Robert Snow, who coached debate at the college for the past ten years, is retiring, and McDonald will take up the position at the beginning of the new semester.

Because of Mr. Snow’s selfless service and godly example, hundreds of PHC students have learned to engage with the world in a clear, cogent, and godly manner. We are tremendously thankful for Mr. Snow’s dedication and commitment.

In 2016, Mr. McDonald graduated from PHC with a B.A. in Government (American Politics and Policy track), where he was an active participant in collegiate Moot Court, Mock Trial, and British Parliamentary Debate.  He completed his J.D. at George Mason University’s Antonin Scalia Law School in 2019, where he twice represented the school at the American Bar Association’s National Appellate Advocacy Competition and won both of the school’s intra-school appellate advocacy tournaments.

We thank Mr. Snow for his years of dedication and welcome Mr. McDonald to our Forensics Department!