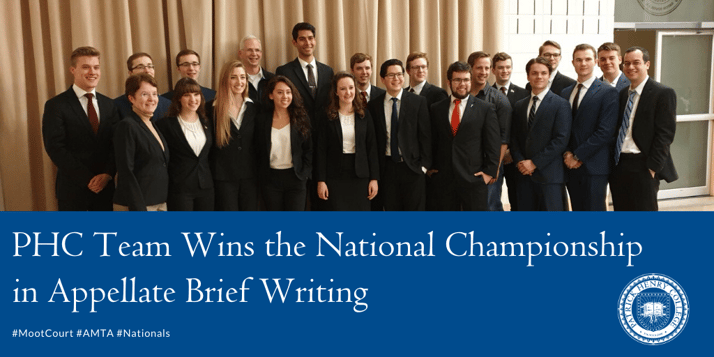 "Let me begin by thanking you for your prayers and support throughout the weekend, which were a tremendous encouragement to all of us," wrote  PHC's Forensics Director Susan Johnson in a campus-wide email on Monday.

"Our National Championship quest [in Moot Court] was not thwarted entirely; it just took a different turn this year. Congratulations to Emma Shipe and Jacob Smith, who won the National Championship in Appellate Brief Writing as Petitioner, with the highest overall score among the 124 briefs submitted!"

Eight moot court teams traveled down to Baton Rouge, Louisiana on Wednesday to begin preparing for the American Moot Court Association (AMCA) National Tournament. On Friday, seven of those teams advanced to the elimination rounds, which took place on Saturday.

Three teams—James and Tyler Dunning, Kyle Ziemnick and Marina Barnes, and Andrew Shelton and Emil Meintjes—advanced to octas ("Sweet Sixteen"), and Shelton/Meintjes made it to quarters before losing a close round on a on a split decision.

“Our students competed with excellence and even more importantly, ‘carried themselves as true representatives of the kingdom’ in both victory and defeat, in the words of an opposing coach” Johnson noted. "It is indeed a privilege and an honor to mentor our students, who are an encouragement to us coaches as well as to others. We are deeply appreciative, too, of the way that so many alumni invested their time and energy in helping the students prepare. Thank you! Soli Deo Gloria."

PHC has earned an unmatched record in collegiate forensics competition by winning 12 of the past 16 AMCA National Tournament Championships (no other college has won more than one), and consistently finishing in the top 1% of the nation in the American Mock Trial Association (AMTA).

PHC alumni have an unparalleled track record of success in forensics, law, and government. Within the last four years, four graduates have clerked for U.S. Supreme Court Justices Alito, Kennedy, and Chief Justice Roberts. Other alumni have become state solicitor generals, argued before the Supreme Court of the United States, and served in the White House in various capacities, including press secretary of Vice President Mike Pence.

Congratulations and thanks to Moot Court Head Coach Peter Kamakawiwoole (PHC 2008) and Assistant Coach Ben Sayre (PHC 2010) for their outstanding leadership this year.

Learn more about the Forensics Program at Patrick Henry College.