Professor of Government Releases Book on the Social Justice Movement 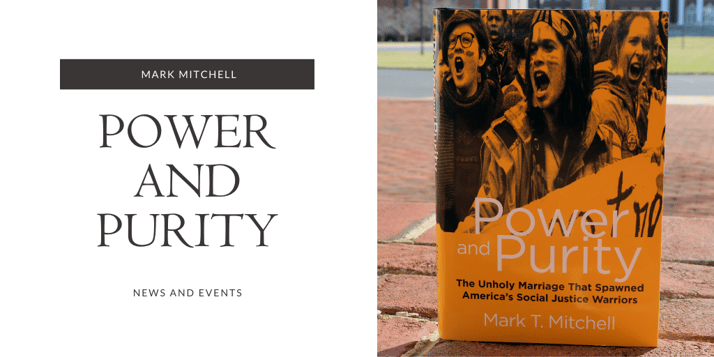 Dean of Academic Affairs Dr. Mark Mitchell released his seventh book, Power and Purity: The Unholy Marriage That Spawned America's Social Justice Warriors, yesterday. "It’s a book that’s trying to make sense of some of the most radical political movements on the left," Mitchell said. In the text he compares social justice movements both to Nietzsche's "Will to Power" and to American Puritanism.

"It’s an incoherent convergence," Mitchell explained. "It doesn’t make sense at a logical level, but what it does is create an energetic movement that seems to explain a lot of what we see on the radical left."

We sat down with Dr. Mitchell, so he could give us more detail. Continue reading for his thoughts on the Social Justice Warrior phenomenon.

Nietzsche Declares That God is Dead...

He says that once there’s no God, we have to question the very fact of morality itself and the category of truth itself. The idea of the Will to Truth needs to be exchanged for the Will to Power. So, power becomes the core of Nietzsche’s thought. What motivates all living creatures is the Will to Power, the will to assert and to dominate. That also seems to be the approach of some of the radical people on the left, a willingness to shout down their opponents, to use intimidation and fear to advance their cause.

But the radical left is cloaked in strongly moral terms...

Tocqueville writes in Democracy in America, that in order to understand a people, you have to understand their origins. America is a Puritan project. We’re deeply infused with a Puritanism—or Christianity. In other words, for Tocqueville, you’re always going to see the residue of Puritanism in American culture.

The Christian structure is that Christ provides a mechanism for forgiveness and restoration, but with the Social Justice movement and identity politics, you have the Christian impulse towards moral purity combined with the Nietzschean Will to Power.

If this trajectory continues, you can imagine our decedents looking at us, finding moral fault with our best efforts, and tearing us down. There’s destruction and rage in the name of moral purity, a kind of impulse that doesn’t end well. Christianity provides a means for restoration and reconciliation, and it justifies the moral categories of equality and rights that the Social Justice folks speak of. It also does imply some limits and obligations.

The other tact is to dispense with moral categories altogether, but few people have the stomach for that. How would Nietzsche respond to the Me-Too movement? For Nietzsche, if someone in power abuses someone weaker, he’d say, “Well, that’s just the way it is.” We all recoil from that. The abuse of power is something that ought not to happen. In The Abolition of Man, C. S. Lewis writes that when everything is reduced to power, invariably, it’s not the power of everyone. It’s the power of a few.

Sin is a perpetual part of the human experience. We have all offended and been offended in various ways. With identity politics, you have the recognition that there’s pain, but because Christ has been evacuated from the equation, people feel like they have to lash out to try to relieve the pain. It can ultimately only be relieved through forgiveness.

I hope this raises questions...

I hope this helps people think in terms of some of these basic categories. I hope that it provides categories to stimulate discussion about these matters.

Why does this language of power seem so prevalent? Why are people just shouting at each other? What’s the fundamental nature of reality? Is the Logos at the center, or is chaos at the center? The answer to that question determines all that follows.