High school senior Helaina Hirsch had already paid her housing deposit at another school -- and had no plans of changing her mind -- when she visited Patrick Henry College in the spring of 2014. But experiencing worship during the College’s chapel service made her reconsider.

“What really struck me was when I heard everyone singing, and I thought, ‘Wow, this culture is so great,’” Helaina said. “I wanted to be a part of that.”

Now, she can’t imagine her college years being any different. Helaina will graduate in spring 2018 with many rewarding experiences, including an internship at the Heritage Foundation and a World Human Rights Moot Court Championship win with her partner William Bock -- whom she’ll be marrying next year.

Helaina started her freshman year at PHC in 2014 with politics on the brain, dreaming of running for office or working on candidates’ campaigns. Now a senior American Politics & Policy major, Helaina’s focus has shifted to law and policy.

She is considering attending law school after she graduates. Whatever she ends up doing post-grad, her goal is helping others.

“What draws me to law is that in law, every day sometimes, you get a different case and become a part of another person’s story for a short time and represent them,” Helaina said. “You can alleviate their suffering and bring justice.” 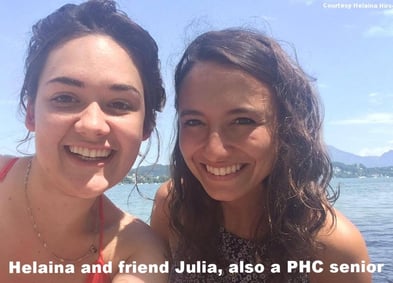 Helaina moved all the way across the country to attend PHC. The Lafayette, California, native has enjoyed getting to know her classmates, who come from all over the United States, and her professors, especially American Politics & Policy program director Dr. Michael Haynes. He is her favorite professor, she said.

“I’ve taken a lot of classes with him,” Helaina said. “Before I came to PHC, one of my friends who had already come here told me when you take a Dr. Haynes class you never fall asleep -- he’s definitely very engaging.”

The experience she built in her classes with Dr. Haynes, who likes to give students projects that mimic the kinds of tasks they will be assigned in their careers, helped Helaina earn an internship with the Heritage Foundation. Since the start of the fall 2017 semester, she has done foreign policy research for Heritage, which is a conservative public policy think tank based in Washington, D.C.

Topics Helaina has delved into include identity politics, immigrant assimilation, and the history of the United States population census -- subjects that required her to look at a wide variety of sources and viewpoints, making her grateful for PHC classes that prepared her to rise to the occasion.

“I didn’t realize how well-developed my research skills were until I got to the internship,” she said. “They gave me the ability to research and find connections.” 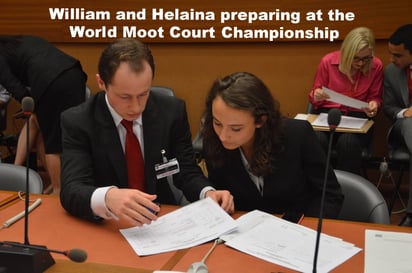 Helaina is also grateful for the debate coaching she has received at PHC, which took her all the way to the top of the moot court world, literally.

In the summer of 2016, she and partner William Bock (who is now her fiancé!) traveled to Switzerland to compete in the Eighth Annual Nelson Mandela World Human Rights Moot Court Competition.

In the finals, Helaina and William beat a team of law students from Moi University in Kenya to take the victory. But that was not the only award PHC received -- William was awarded the first-place oralist in the tournament and Helaina earned second place.

“It was kind of surreal,” Helaina said. “Putting our heads together allowed me to do something I never thought I’d be able to.”

At first, she was not sure if being debate partners with her then-boyfriend would be a good idea. But when she saw how she and William were able to support each other during preparation and even take breaks to watch funny YouTube cat videos, Helaina knew she had made the right choice -- in debate and in life.

William proposed in June 2017, and the wedding is scheduled for July 2018. The freshman year sweethearts cannot wait to see what life will look like after they graduate.

But whatever the future holds, Helaina feels like her years at PHC have prepared her to follow the plans God has for her.

“One really big lesson I’ve learned at PHC is just to trust that God’s plan is best,” she said. “I might think I’m going to PHC to be a lawyer, but it might not turn out that way. It’s just as good if I’m following God’s plan.”

If you're interested in reading more about William and Helaina's World Moot Court Championship win...