Kelly Freestone Published in the Oswald Review: a Display of Excellence in Writing

The Oswald Review is an annual undergraduate English journal—one of the few that publishes work originating outside of higher-ed institutions, operating as an extension of the University of South Carolina. Every year, it gathers and reviews some of the best English papers, submitted from countries like the U.S., the U.K., India, and Japan, and publishes a handful of them per volume.

This year, Kelly Freestone, a senior at Patrick Henry College, was one of the seven authors published in the 22nd volume of the Oswald Review.

Freestone’s paper, a twenty-four-page evaluation on the use of rhetoric in Horace’s Odes, is a remarkable achievement; it speaks to her skill as a scholar, a student, and a writer. As for Patrick Henry College, Freestone’s paper is yet another testament to the training and solid foundation for academic writing provided by the classical liberal arts.

But at its outset, it was just an end-of-the semester paper.

Freestone had originally written it as a paper for a rhetoric class last summer. At the time, she was also enrolled in a directed study on Horace and his Odes. Freestone recalls how the combination of the two subjects jumped out at her as a potential paper topic. 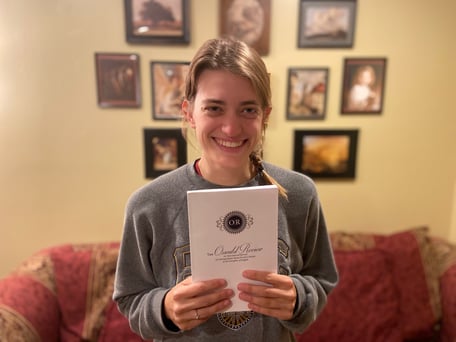 “I have to write this research paper for rhetoric… and I really like Horace—so maybe I’ll write about rhetoric in Horace,” Freestone explained.

After having submitted the paper for the class, her English professor, Dr. Grewell, returned it with the suggestion that she submit it for review. Freestone, although not particularly expecting anything to come of it, decided to give it a shot and entered her paper with the Oswald Review. A few weeks later, she received notice that her paper had been selected for the journal.

This is the first time she has been published.

“I didn’t really think much about it because I had zero expectations,” Freestone confessed. “That was exciting.”

While Freestone is still evaluating her options about grad school, she would like to either go overseas to continue her education or stay in the United States. The specific schools she wants to apply to are still up in the air, but either way, she would like to take the GRE first.

While her paper with Oswald might be her first published work, it's not likely to be her last. The faculty and student body at Patrick Henry College have every confidence in her future scholastic endeavors.

Want to learn more about literature and language at PHC? Click here to read a story of three students who went to China to teach English!