Read Dr. Cory Grewell's Paper on Imaginative Will and Participation in God's Being

Dr. Cory Grewell, Professor of Literature at Patrick Henry College, presented a compelling paper on humanity’s role in the created order at a regional meeting of the Conference on Christianity and Literature (CCL) last year.

His paper unpacks the interplay between Imaginative Will (read on to find out what that means) and human participation in God's being.

It was one of many papers at the conference furthering the investigation of “relationships between Christianity and literature,” according to the conference’s website.

PHC is proud to support a robust faculty who actively contribute to their fields—in and out of the classroom.

Grewell noted this particular paper is part of a larger work in progress which will mine “the essential role of the imagination in relation to Nature, Literature, the Scriptures, and Loving Community.”

The following is a brief summary of the paper, followed by an excerpt from its closing paragraphs, courtesy of Dr. Grewell. Read the full work here.

"'Imagining Nature and Reading General Revelation' explores the role of the human imagination in participating the Being of God in created nature. Building on the work of Douglas Christie’s 'contemplative ecology,' Romantic Poetry, and medieval mysticism, the essay argues that through the use of the imaginative will, we can experience God in nature and find deep meaning in reading the 'second book of revelation' that is creation itself. Such a meaningful reading requires a will that is both submitted wholly to God and at the same time keenly and actively paying minute attention to the world of creation around us. The active and yet submitted imaginative will is a paradox that ultimately finds its resolution in a perception tempered by love: love for the creation—including our fellow man, love for God, and bathed in God’s life-giving love that sustains both us and the creation in which we live.”

“It is worth noting that this union of wills that Lewis describes as typical of Paradisal Man takes place in the presence of and while actively experiencing, affecting, and participating created Nature. The sort of Union with God that Lewis, and Emerson, and Evagrius and Christie all describe is not dis-placed, but rather firmly fixed in Creation, and the Imaginative will—or willful Imagination—that makes meaning out of Creation is all the while so subsumed by union with God and Nature that the meaning he makes undoubtedly strikes the poet as wholly inspired, or given in a vision.

Western Literature is filled with examples of this kind of 'inspired' translation of the inchoate spiritual meaning of nature into discursive truth and beauty. Here, though, I want to return to where Christie started us with monastic mysticism and consider briefly Julian of Norwich’s well-known contemplation of that small portion of Nature that is the hazelnut. Julian’s account of her vision or 'showing' as she calls it reads, 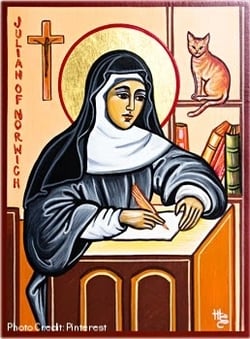 And in this [vision] he showed a little thing, the quantity of an hazelnut, lying in the palm of my hand, as me seemed, and it was as round as a ball. I looked thereon with the eye of my understanding, and thought: What may this be? And it was answered generally thus: It is all that is made. I marveled how it might last, for me thought it might suddenly have fallen to nought for littleness. And I was answered in my understanding: It lasteth and ever shall, for God loveth it; and so hath all thing being by the love of God.

In this little thing I saw three properties. The first is that God made it, the second that God loveth it, the third that God keepeth it. But what beheld I therein? Verily, the maker, the keeper, the lover. For till I am substantially united to him I may never have full rest, ne very bliss; that is to say that I be so fastened to him that there be right nought that is made between my God and me. (416)

In this vision, which is to say in this act of participation of a piece of Nature, the hazelnut becomes, through Julian’s imagination, a vehicle wherein she is able to fully participate not only nature, but the very Being of God. Nature is a conduit, and meaning is a synthetic reality where both the poet and the Nature she is contemplating ultimately are subsumed into the Divine Being. The nut, imaginatively contemplated, points meaningfully to the substantial union of Julian and God in eternal Being. Importantly, the power that upholds this union of Being, and that fuels the imaginative meaning of the vision as a whole is love. Love is the ground of Being and Union, and meaning, for that matter. And the idea of love as the synthetic power that both holds the universe in union and grants it meaning if we will only see it brings us back to Christie’s assertion that the act of 'paying attention' and imaginatively participating Nature in union with God and with each other may well hold at least some of the resources necessary to 'healing the wounded fabric of creation.'"

Dr. Grewell also contributed a chapter entitled, “Elegiac Fantasies of Past Christendom in Tolkien’s The Fall of Arthur,” to a collection of essays on the Inklings’ contributions to Arthurian lore. The Inklings and King Arthur, published this month, is now available to purchase on Amazon.

Enjoy Dr. Grewell’s paper? Click below to read more about what our faculty are up to and how they are promoting the Classical Liberal Arts in their unique fields!