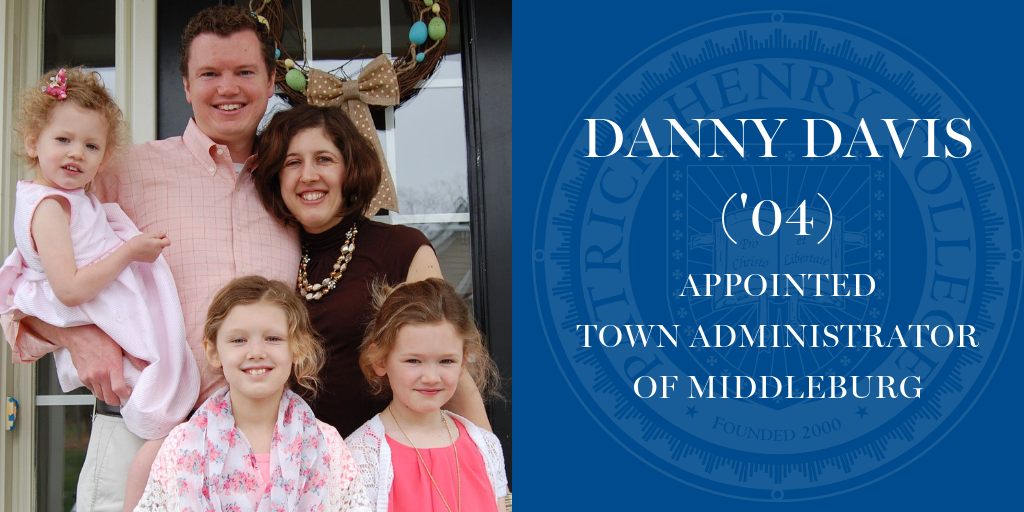 Patrick Henry College alumnus Danny Davis ('04), has been elected as town administrator of Middleburg and began his new position on November 5.

Davis replaced eight-year veteran Martha Mason Semmes. His 15 years of experience in town government within Loudoun County, combined with his love of the work, more than qualifies Davis for the job. Middleburg is known for its charming downtown comprised of shops and eateries, as well as the beautiful surrounding horse country. Davis hopes to preserve the aesthetic of the town, yet also open opportunities for both old and new businesses to flourish.

“My role is finding out how we facilitate that sense of a good, strong, enjoyable community for people to live and visit,” Davis said.

Davis has achieved similar goals in other government roles by creating compelling arguments for his ideas and delivering them diplomatically. He learned this skill and, in part, his love for community, from his education at PHC.

Davis arrived in Purcellville from his home in Atlanta to join 90 other students as the first class of Patrick Henry College in 2000. Davis experienced being on the ground level of PHC’s development, helping to create traditions like the student senate and the honor code.

Though the college was young, the academic expectations were high for the Public Policy major. Those challenges, the same that PHC students experience today, equipped Davis for his government career.

“At the end of the day, it is about making sure you communicate clearly and effectively. The quality of expectations for writing and the work we had to do at PHC has benefited me in all my jobs. You have to be able to write well and put together your thoughts in a compelling manner,” Davis said.

In his senior year at PHC, Davis helped on a campaign for a local Board of Supervisors’ election. When his candidate was elected, Davis was hired as her legislative aide at the County Board.

“Within a few months of working for her, I realized what an impact you can be on the community and on people’s lives. I just loved helping people be happy where they lived and making a difference,” Davis said.

Davis married his wife, Angela, and graduated Summa Cum Laude in 2004. With his new job and new bride, Davis settled in the area. He worked in various government positions in Loudoun County for eleven years. He then became Assistant Town Manager of Purcellville in 2015. It was a quite a difference going from Loudoun County’s $450 million government budget to Purcellville’s $20 million, but the smaller community gave Davis the ability to see government from a closer and hands-on level. He used his innovative technology skills to communicate with the public. Through creative solutions, Davis improved community outreach and engagement and assisted with other behind-the-scenes things, such as restructuring Purcellville’s municipal debt.

In 2017, Davis was president of Tribute at One Loudoun for 10 months, until his appointment as Town Administrator of Middleburg. Now in Middleburg, his focus is getting to know the community. Though smaller than Purcellville, he is still using the same tactics for helping businesses and community flourish. Davis’ academic training could have only taken him so far in his career, however. His love of people and desire to serve them was learned through his close relationship with his father, who passed recently this year.

As an airline pilot, the late Mr. Davis didn’t just sit in the cockpit and fly airplanes; he would go out of his way while walking through the Atlanta airport to make sure people made it to their flights or had help in whatever way he could offer it.

“He was always a thinker and a creator and was all about people. I think that is where I got my desire to serve and help people,” Davis said.

In his position in local government, Davis can directly impact the lives of those in the community. As he moves forward as Town Administrator, Davis feels blessed and thankful. “I am presented with an opportunity to do what I love, and I enjoy the work that I do,” Davis said.

To read more alumni stories, click the button below!