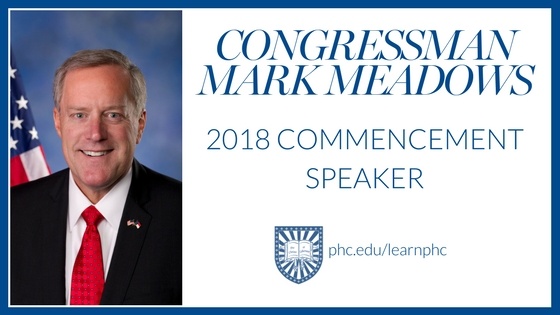 Patrick Henry College is proud to announce Congressman Mark Meadows as our 2018 Commencement Speaker. Graduation is scheduled for May 12 and is open to all family and friends of the graduates as well as PHC alumni. Those unable to attend may watch via the live stream.

Congressman Meadows, Representative of North Carolina’s 11th District, is Chairman of the House Freedom Caucus and a champion of conservatism in Congress. He spent 27 years as a small business owner prior to pursuing a career in politics and is now dedicated to promoting government accountability, fiscal responsibility, and pro-family initiatives on a national level.

Rep. Meadows has quickly developed a reputation on Capitol Hill as a principled conservative with a unique ability to communicate, negotiate, and find consensus among members with differing opinions. Both Democrats and Republicans alike, having worked with Meadows, referred to him as a “great leader,” a “listener,” and someone who “doesn’t back down from a fight.” As a result, in just 5 years in Washington, Meadows has quickly risen to be one of the most influential Members of Congress. A recent profile described Congressman Meadows as “the most powerful man in the House” and someone with major influence on the future of the Republican policy agenda. 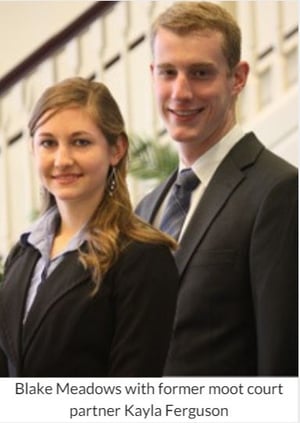 Above all, Congressman Meadows is a deeply committed Christian, a man who has demonstrated a devotion to his faith even in the highest pressure environments. One of his proudest accomplishments to date was his role in helping secure the release of Miriam Ibrahim, an individual who had been imprisoned by the Sudanese government for simply practicing her Christian faith.

Patrick Henry College holds a special place in the hearts of the Meadows family. Rep. Meadows’ son, Blake Meadows, enrolled in Patrick Henry in the fall of 2010 and graduated in 2014, eventually moving on to serve as an attorney for the Alliance Defending Freedom.

We look forward to seeing you there!