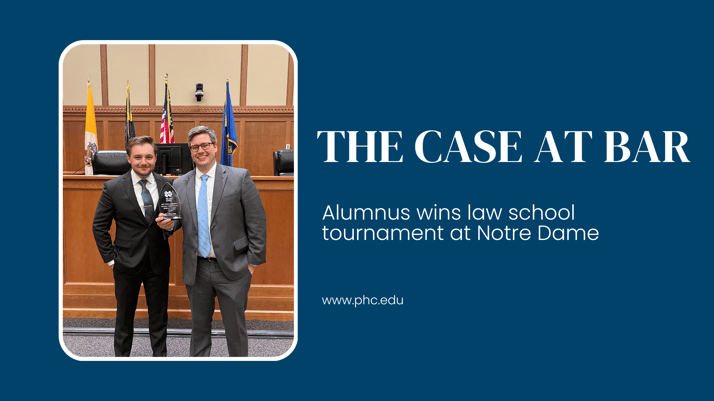 Daniel Thetford (APP ‘18) and The Antonin Scalia School of Law at George Mason teammates Stuart Spooner and Raymond Yang won the 2022 Notre Dame National Appellate Advocacy Tournament for Religious Freedom. Hosted yearly, the tournament’s theme centers around religious freedoms and proposes problems for teams to argue before current federal judges or other practitioners. “In our final round, we had one federal district attorney and two Federal Circuit Court judges,” Thetford said.

The tournament’s problem centered around a religious school that wanted to fire an educator for teaching something they considered to be unorthodox. In addition, the state wanted to sue the school for violating their employment laws. “It’s a fictional problem, but it is definitely something that could absolutely happen in real life,” Thetford said. The second half of the problem centered on an establishment clause. This clause said that schools receiving funds from the state grant program, such as the school in question, cannot use any government funds for teaching religion.

While the problem is fictional, it is based on two recent Supreme Court cases that “have changed the landscape of this issue,” according to Thetford. Kenney v. Bremerton School District (the case of the public-school teacher praying on the football field) and Hosanna-Tabor Evangelical Lutheran Church v. Equal Employment Opportunity Commission (deciding whether or not a school can fire a teacher who disagrees with the school’s beliefs), both played into their fictional case. “It's a challenge to determine and interpret what [these decisions] mean for how we should view the law [and] religious freedom in the future,” Thetford said.

Thetford said that the judges “graciously took the kid gloves off” during the final round, which provided the team a glimpse of what it is like in the real courtroom. “They’re asking tough questions. It is a challenge to be able to answer those well and winsomely…” Thetford recalled. He is grateful that the judges gave them that experience.

After graduating from PHC with an American Politics & Policy major in 2018, Thetford went on to attend George Mason’s Antonin Scalia School of Law. He will graduate in the spring.

Looking back, Thetford said that PHC prepared him well for law school and a career in law. From excellent advisors to the core curriculum, Thetford feels like he has an advantage over his peers, especially regarding constitutional law. “When I tell [other students] that my undergraduate requires everyone to take constitutional law, they're just blown away… It is really unique [because] it doesn't matter if you are [majoring in] government or business or literature—you're going to take it [at PHC]. … I'm so glad to have [had] that opportunity.”

PHC’s unique moot court training helped Thetford stand out at a tournament in Boston. During a post-competition dinner, one of the judges asked Thetford if he completed his undergraduate at Patrick Henry College. When Thetford asked how he knew, the judge responded that he knew the moment Thetford opened his moot court argument with “the case at bar,” since he had only heard that phrase from students who competed in moot court at PHC.

During the tournament at Notre Dame, Thetford felt a distinct advantage at arguing the case because his education at PHC equipped him with a knowledge of the law through a Christian perspective. While building their case, Thetford had to explain to the judges why it is so important to a religious school to teach Christian doctrine. “I think that is something you can really only do from a Christian perspective,” Thetford said.

“I think, for me, one of the most enjoyable and rewarding parts of that experience was in the final round, trying to explain to the judges why the doctrine of creation and the doctrine of death and resurrection of Christ is so important to the Christian faith,” Thetford said.

Following graduation, Thetford will work as an honors attorney at the Federal Deposit Insurance Corporation doing banking law for the federal government in a two-year rotational program.

Learn more about the Pre-Law advising program at PHC