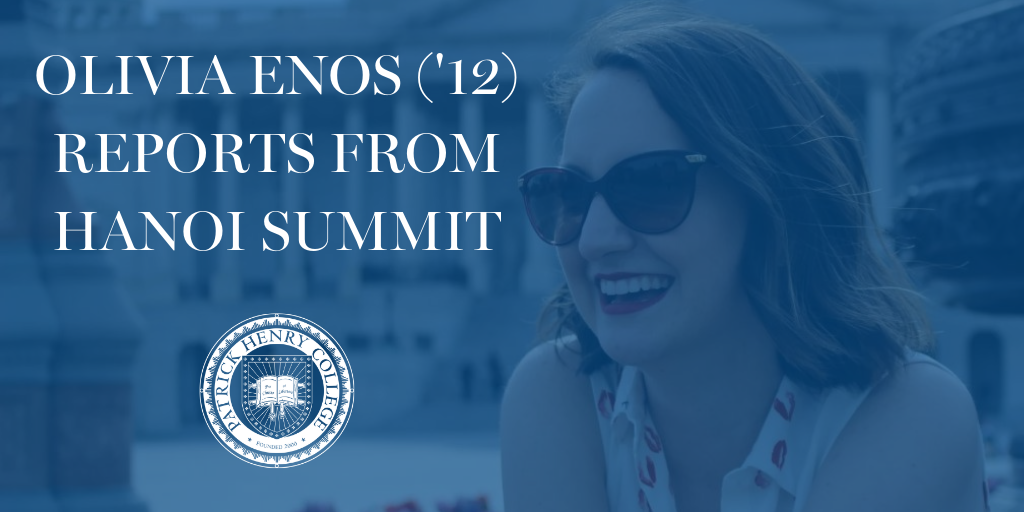 It's #HanoiSummit week, and @Heritage has, quite simply, the best group of experts in the country ready to preview and respond to developments with can't-miss analysis!@BruceKlingner @OliviaEnos (from Hanoi)@Brookes_Peter @JJCarafano
Dean Cheng pic.twitter.com/Az8j0djvAy

Last Friday, she published a comprehensive report on the humans rights conflict between the United States and North Korea titled, "Leveraging U.S. Law to Advocate for Human Rights in Talks with North Korea." You can read the full report here. Major news stations like Fox immediately began discussing it.

Enos, who is also a regular contributor to Forbes, wrote this piece earlier in February pushing for more human rights talks between President Trump and Kim Jung-un.

Sharing some of my thoughts on the lack of progress on #denuclearization since the #SingaporeSummit ahead of the second meeting between @realDonaldTrump and Kim Jong-un at the #HanoiSummit. Stay tuned for more updates on #NorthKorea in the days ahead. pic.twitter.com/zeykqnlRL6

She also discussed the situation with Shannon Bream on Fox News @ Night where, incidentally, alumna Kendra Olson ('17) is a Production Assistant. You can watch the segment here.

After reporting on the summit, Enos is hoping to finalize the adoption of her new dog, Cosette.

We think we have a strong lead to get Cosette back to DC. Will keep everyone updated once details are finalized. Isn’t she looking better already? ♥️ pic.twitter.com/6z1LyObq13

Read more about Enos' life and work in D.C. on her alumni profile page, or check out other alumni stories by clicking the button below...