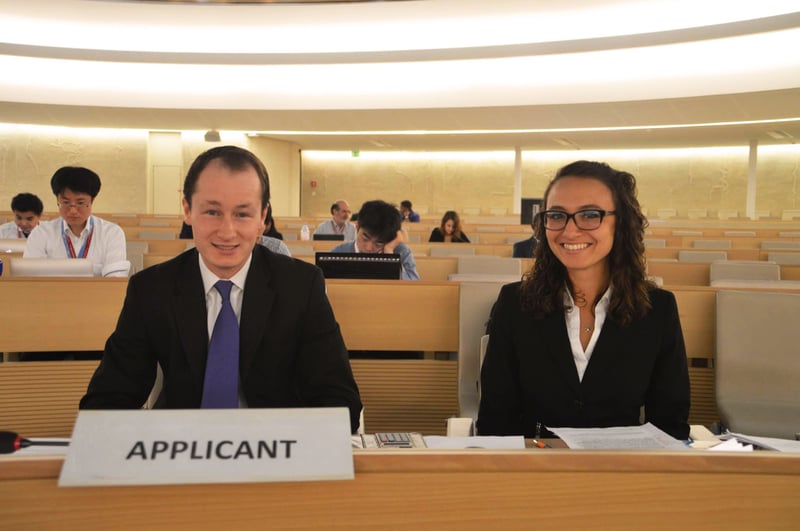 William Bock instantly echoed the thoughts of his partner, Helaina Hirsch, “Praise God! We did it!” After six and a half weeks of intense training and preparation, the duo held the World Trophy in their hands and smiled for the cameras.

Winning first place at a Moot Court Tournament is not a new experience for Patrick Henry College. After winning nine out of twelve National Championship Tournaments, Michael Farris leads his teams into the rounds thinking that PHC will likely win. However, Dr. Farris had a different feeling heading into a World Tournament. “Here I thought we only had a shot at winning,” he said. “I was hoping we would be in the top three or four teams. I wanted us to have an admirable showing.”

When William, Helaina, and Dr. Farris arrived at the competition, they were greeted with an impressive venue. Not only was Geneva breathtaking, but the caliber of the staff included prominent human rights officials and academics from all parts of the globe. 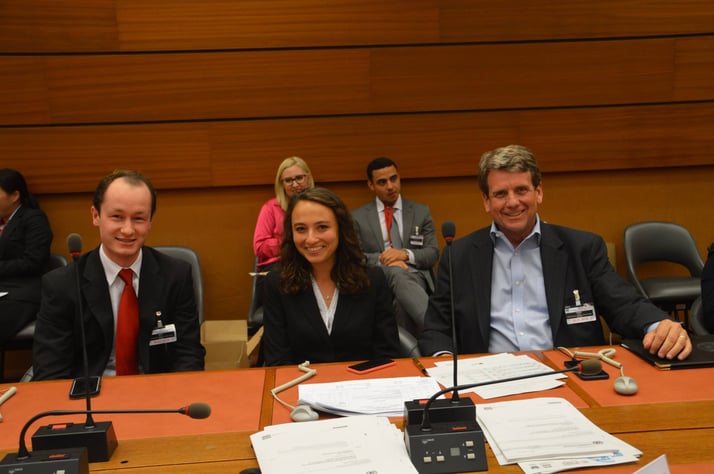 Since the judges were from all parts of the world, the judging was different than it is in AMCA tournaments. The judges in each round had the briefs the contestants’ submitted before them. The judges could hold the advocates to the contents of their written submissions as well as ask questions about their briefs. “The number and difficulty of questions we received varied from round to round and always kept us guessing!” Helaina said.

Adapting to fluctuating situations is not a new experience for either competitor. After taking two years of courses at Patrick Henry College, William and Helaina are accustomed to learning material and discussing concepts with their peers and professors. “Although vocalizing my ideas in front of all of my classmates seemed a bit daunting at first,” Helaina said, “it has taught me to not only deeply consider the issues that I am studying, but to express my analysis of them in an understandable way.”

William and Helaina had the opportunity to interact with individuals from many different countries. The only other United States team to qualify for the oral argument portion of the competition was Yale Law School. Other teams present at the tournament included teams from Botswana, Kenya, Malawi, Zambia, Zimbabwe, China, Japan, Nepal, the Philippines, Thailand, Belarus, Australia, Argentina, and Brazil. “It was so interesting to compare education systems with these law students, as well as to hear about their perceptions of America and our upcoming election!” Helaina said. “Many of them shook their heads in sympathy that we have to choose between Hillary and Trump.”

William and Helaina’s favorite moment from the entire tournament was the announcement that PHC qualified for the final round. Dr. Farris was an integral part to the team’s victory. Dr. Farris spent months teaching William and Helaina international law, helping them to master the facts of the case and to present them in a clear and compelling manner. William watched Dr. Farris’ face as they listened to the announcement. “The man was near tears,” William said. “To see him so happy after we heard the result meant the world to me.”

Helaina agreed. “It was pretty great to see Dr. Farris, after hearing the news, do random fist pumps and spontaneous leaps for joy,” she said.

Dr. Farris was proud of his two students, both with their tournament results and with their character. Even when there were hitches in the tournament that could have negatively affected William and Helaina, the team responded with graciousness. “I want to compete with excellence and grace year after year,” Dr. Farris said. “I think we did really well on both scores this year.”

As a result of the contest, William and Helaina received the prize of an all-expenses paid trip to Lucerne, Switzerland to attend the Lucerne Academy for Human Rights Implementation. Next July, students from across the globe, guided by distinguished professors and practitioners, will take classes focused exclusively on human rights law, author a hypothetical appellate brief, and participate in a prominent moot court competition. William and Helaina are eager to start on the new adventure.

PHC intends to participate in the competition again next year. William and Helaina also encourage their PHC friends to try to enter the Nelson Mandela World Human Rights Moot Court competition. “Participating in the competition constantly pushed me outside my comfort zone,” Helaina said. “From writing a law brief, to competing in oral arguments against law students who certainly were more knowledgeable than I was—each step encouraged and motivated me to rely on God’s strength instead of my own.”