What Christians should know about Hanukkah 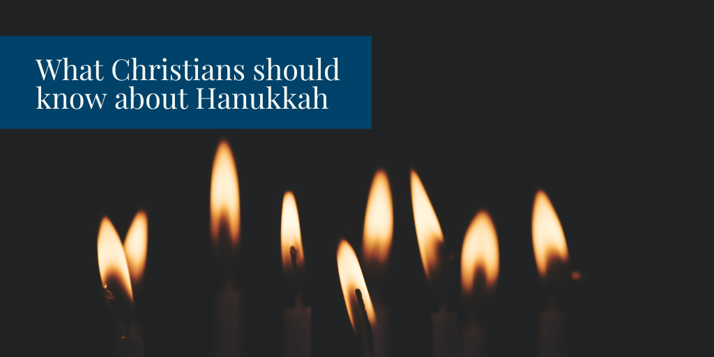 Christians often think of Hanukkah as an Old Testament Jewish holiday, but the events that inspired the festival did not happen until after the last book of the Old Testament was written. In fact, the only person recorded in the Bible as observing the feast of Hanukkah is Jesus Christ in the New Testament (John 10:22). As the eight days of Hanukkah begin at nightfall on the 18th of December this year, Christians would do well to reflect on the history of this special holiday.

The History of Hanukkah

The Feast of Hanukkah commemorates the rededication of the Second Temple in the second century B.C. After the death of his father Antiochus III, a man called Antiochus IV Epiphanes, king of Syria, gained control of Israel. He outlawed the practice of the Jewish religion, forced the people to worship Greek gods, and desecrated the Temple by offering a pig sacrifice to Zeus on the altar. A small band of Jewish rebels lead by Mattathias and his son Judas Maccabeus fought back. They eventually succeeded and drove the Syrian Army out of Israel. Their first act was to cleanse and rededicate the Temple.

According to the Talmud, the central text of Rabbinic Judaism, when the Jewish rebels came to light the Menorah of the Temple (the seven-branched candelabrum described in Exodus 25:31-40), there was only one small jar of holy oil left to light it. Although there was only enough oil left for one day, the little jar’s supply miraculously burned for eight days, until more holy oil could be made. In celebration of this miraculous event, the Jewish people proclaimed an annual eight-day festival, beginning on the 25th day of Kislev, on the Jewish calendar.

Other Names for Hanukkah

Hanukkah is also not the only way to spell or pronounce this holiday. The first letter of the word Hanukkah (חנוכה) is pronounced like either a “h” or a “ch” sound in English. There is also dispute over whether the word should include one or two of the letter “k”. Although the spelling “Hanukkah” is most common today, “Chanukah” is more traditional.

Hanukkah in the Bible

Because the Maccabean Revolt occurred after the writing of Malachi, during the Intertestamental Period, Hanukkah does not appear anywhere in the Old Testament. It was still celebrated at the time of Christ in Israel, however, while under Roman occupation. John 10:22 says, “And it was at Jerusalem the feast of the dedication, and it was winter.” Jesus came to Jerusalem for the observance of Hanukkah, celebrating the festival in the same temple that was cleansed by the Maccabees in the second century B.C.

Two chapters before, in John 8:12, Jesus says that “I am the light of the world: he that followeth me shall not walk in darkness but shall have the light of life.” Just as the little jar of holy oil lit the temple for the Jewish people in the second century, Jesus is the light that shines against all odds in the darkness of this world. If we keep our eyes on Him, we will not walk in darkness but in his life-giving light.

In the celebration of Hanukkah, for each of the eight days, a new candle on the nine-branched menorah is lit. The ninth candle is used to light the others. Typically, during the lighting of each day’s candle, blessings are recited, and the menorah is placed in a window for all passersby to see.

As another remembrance of the jar of holy oil, the traditional Hanukkah foods are fried in oil. Latkes (potato pancakes) and Sufganiyot (jam donuts) are served. It is also customary to exchange gifts and spin special tops called dreidels.

As we enter the Hanukkah celebration, whether you personally celebrate or not, pause to remember the history of the holiday and its significance. This is an important time to rededicate yourself to worshiping God and walking in the light of Christ. Just like the miraculous jar of holy oil, we too are called to be shining lights in a dark world this holiday season. Happy Hanukkah!