Why Watership Down Should Be On Every Student's Reading List

I'm sure plenty of people have declined to pick up Richard Adams' classic novel "Watership Down" for all the wrong reasons.

Yes, this is indeed a story about sentient rabbits. And you’d be forgiven for thinking the book is merely an overlong fairy tale or something akin to Brian Jacques’ series of “Redwall” fantasy novels. Perhaps you’re into grim, gritty realism and think you’re beyond any such fluff. But trust me, “Watership Down” is so much more than a simple children’s story.

First things first, a quick synopsis: our hero, the rabbit Hazel, resides in the Sandleford warren in a semi-mythologized England. When his friend Fiver—the fifth-born runt of his litter—experiences a prophetic vision of impending doom, Hazel leads a small contingent of rabbits on a dangerous journey to find a new home. The rest of the book chronicles their many adventures, near-death escapes, and moments of camaraderie.

You might not be won over by that description, which could be attached to any of the numerous “Redwall” knockoffs one finds in Barnes and Noble’s young-adult section.

So what makes “Watership Down” a must-read?

There are several reasons it’s long been listed in the pantheon of literary classics. First, it’s a highly engrossing story and a propulsive read. You might hate fantasy stories or think you’re too old for them, but one quickly forgets that “Watership Down” has anything to do with rabbits. For all intents and purposes, this is an old-school epic that draws heavily on Homer’s “Odyssey” and Virgil’s “Aeneid.” 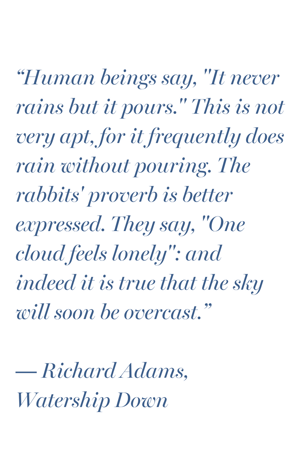 Second, “Watership Down” is a surprisingly rich introduction to political theory (and a much more engaging read than Plato’s “Republic”!). As Hazel and friends venture across the English landscape, they encounter a broad range of rabbit societies—a small warren destined for inevitable destruction by more powerful forces, a passive warren routinely plundered by outside predators, and finally the totalitarian warren of Efrafa, governed by the iron fist (paw?) of sinister General Woundwort. Throughout the story, Adams forces readers to confront the risks of democracy and the pitfalls inherent in any attempt to forge an “ideal government.” Think George Orwell’s “Animal Farm,” but unfolding on a massive storytelling canvas. (In a slightly different sense, “Watership Down” is an effective model for future writers: through the medium of fiction, it manages to convey surprisingly nuanced theoretical concepts without ever browbeating the reader.)

Yet the deepest appeal of “Watership Down”—and the biggest reason it lingers so long in the mind—is its profound understanding of the importance of storytelling and tradition.

As the novel unfolds, we’re introduced to folktales of the legendary rabbit El-ahrairah, whose heroism continues to inspire Hazel, Fiver, and their companions. We learn how El-ahrairah reckoned with his world’s Creator, outwitted the cruel Prince Rainbow, and wagered against the terrifying Black Rabbit of Inlé, all in defense of his people. These legends form the anthropological architecture of the rabbit community, allowing members to situate themselves as both hearers of the tale and participants in its broader message. Amidst the challenges they face, the flame of their history and values continues to burn brightly. 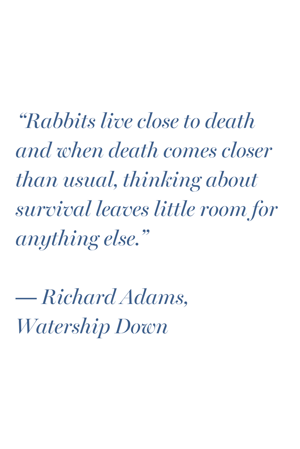 Such custodianship of the past is an essential component of any liberal arts education: we are, after all, blessed to be heirs of a tradition extending back to the desert-wandering Israelites and the pre-Socratic philosophers of ancient Greece. That tradition has been constituted, in large part, through narratives both factual and fictional—Caesar crossing the Rubicon, Achilles and Hector fighting at the gates of Troy, Hamlet confronting the threat of existential despair, and so forth. And so too with the story of America itself: our national identity has been forged from tales of the Boston Tea Party, the Constitutional Convention, General Lee’s surrender at Appomattox, and so on. Yet that sense of rootedness in history and narrative, of participation in a story that transcends us, ought never be taken for granted. Whether we realize it or not, each new generation must choose whether to pass on that heritage or let it wither. (Such a choice, of course, is similarly present in our membership within the Christian Church. It may be easy to forget in an age of hyper-individualism, but ours is a faith grounded in thousands of years’ worth of saints, sinners, and Scriptures, and we have the responsibility of stewarding that orthodoxy.)

As James Madison once wrote, “the improvements made by the dead form a debt against the living, who take the benefit of them.”

Few books I’ve read—and even fewer children’s books—convey so strong a sense of indebtedness to one’s predecessors as “Watership Down.” All communities—and all individuals—stand on the shoulders of their predecessors, and organize themselves around the stories those forerunners left behind: “Watership Down,” at its heart, is a celebration of that kind of spiritual and intellectual inheritance.

And that’s why it should be on any PHC student’s reading list.