A Closer Look at Philosophy Class at Patrick Henry College 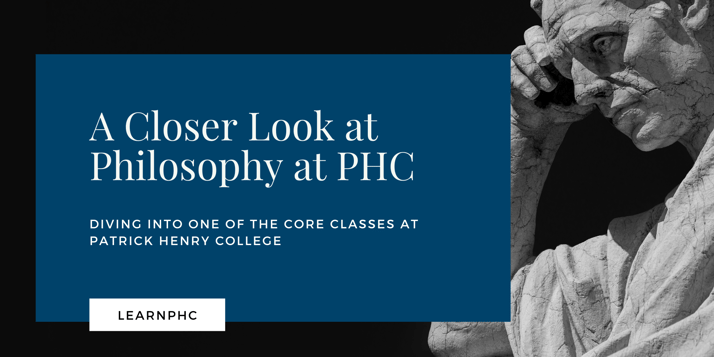 Philosophy, a core class at Patrick Henry College, brings students and their beliefs face-to-face with some of life's most difficult questions.

There are no pleasantries at the start of class, no "how do you do’s," no beating around the bush. In the first five minutes of class, Dr. Matthew Roberts hits his students with a question that everyone has to wrestle with at some point or another:

“What is the good life?”

Most students, wary of being wrong, don’t typically propose an answer.

It’s a rather abstract question, isn’t it? There’s a lot of those. Philosophy, as a subject of study, is often mocked as an  esoteric field pertinent only to snobs, and certainly not to the every-day man. But whether they realize it or not, most people are already asking philosophical questions—and actively looking for answers.

But philosophy can be scary: it’s big, and it’s hard to know where to start. It’s a murky subject, and if you’re going to study it, you’ll definitely need a guide. 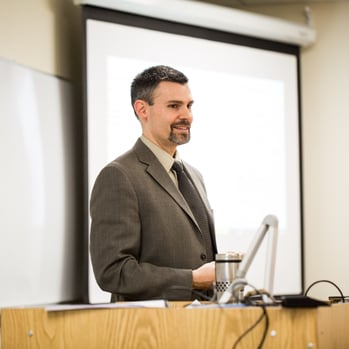 Patrick Henry College examines Philosophy by looking at it through the lenses of history, politics, and a Biblical worldview. Dr. Roberts makes it clear that philosophy influences the way people behave—or don’t behave—on a daily level.

Think about it for a second. Is stealing a TV from Walmart wrong because it’s evil, in some metaphysical sense, or is it just wrong because the majority agrees that theft is unhelpful to society?

This might sound like a silly example, but it points to bigger questions. Here’s one, for instance, that’s particularly pertinent to Christians:

Does God get to arbitrarily decided what “good” is? Or is there some standard that even God himself must follow?

It’s because of questions like these that Patrick Henry College aims to follow the instructions of 1 Peter 3:5 and equip its students with the ability to rationally give a reason for ideas like faith and virtue.

Plato, Descartes, and Nietzsche might all be familiar names, but by taking philosophy at Patrick Henry College, students will take away an understanding of what each of these thinkers believed and the immeasurable impact those thoughts had on the world around them.

Some of these thinkers continue to have an influence in a 2019 United States. Nietzsche’s famous claim, “God is dead, we have killed him,” is something the students of today must consider. Philosophy at Patrick Henry College will train students to evaluate such claims and teach them how to respond.

Like every other core class at Patrick Henry College, Philosophy is designed to help students think critically, argue well, and, above all, pursue truth.

Click here to learn more about our philosophy of education at Patrick Henry College!