Ever since she was a little girl, freshman Rebecca Waterman couldn’t stand the sound of the zipper clicking against her boots. She would always try to find ways to attach the zippers to her boots so they wouldn’t rattle as she walked down empty hallways.

Diagnosing ADD
Waterman has Attention Deficit Disorder (ADD). When she was fifteen, her mom noticed that she displayed ADD symptoms and gave her a book titled Healing ADD by Dr. Daniel G. Amen. She didn’t want to believe that she had the condition. One year later, while scrolling Pinterest, Waterman came across a selection of memes that she related to. When she realized they all revolved around ADD, she started to wonder if maybe her mother was right.

Her initial reluctance was because of her preconceived notions surrounding ADD. “The way it was stereotypically portrayed didn’t match with what I was experiencing,” she said.

ADD is characterized by bouncing around, an inability to hold conversations, and its prevalence in boys over girls. Psychologists often treat ADD with medication such as Ritalin. According to the CDC, about 5-7 million children aged 6-17 have been diagnosed with ADHD and over half are on medication. Dr. William Graf told The New York Times that children with “mild symptoms are being diagnosed so readily.” Over-diagnosis leads to medicating children who may not need medication. Waterman has learned to effectively manage her symptoms without medication. 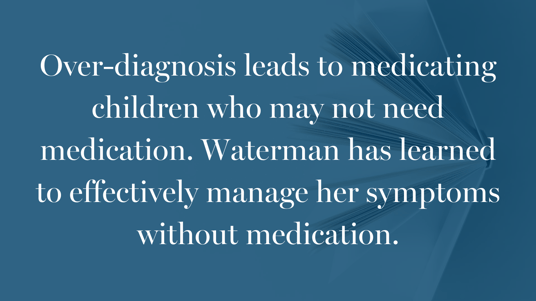 ADD is an imbalance of chemicals in the brain, causing poor performance in certain crucial areas of the brain. There are seven classifiable types of ADD. Waterman has Type 2 ADD which is characterized by uncontrollably active thoughts, a vivid imagination, difficulty engaging in present situations, and a lack of awareness of time.

To someone who is unfamiliar with ADD, Rebecca’s behavior might appear lazy or unmotivated. Brain scans show that brain inactivity is the issue, however, not laziness. When Waterman concentrates, the temporal and frontal lobes of her brain are deactivated. Waterman loses her ability to concentrate and complete a task ahead of time. Her brain literally stops working.

Although Waterman starts thinking about her assignments way before the deadline, she cannot finish them until the deadline is looming. When she sits to concentrate on a paper, her brain stops working.

"It feels like you are slowly suffocating to death in a very hot, boring room," Waterman said. "[My brain] feels swollen almost. It feels desperate."

She feels like this until her brain releases enough epinephrine and dopamine to induce a sudden relief that smoothly transitions her into a state of focus. At this point, her thoughts move faster than she can type.

This happened when she wrote her senior thesis in high school. After weeks of preparation and sluggish progress over the weeks, she changed her topic 48-hours before the deadline. She disposed of about 20 pages of previous research that she had accumulated over the weeks and wrote 18 pages on the new topic in two days.

Once she is able to focus on her assignment, she loses track of time. Grabbing a sticky note, she organizes the remainder of her day into 10-minute segments. A timer will go off every ten minutes to prevent her from getting lost in time and work.

This article was published in The Herald, PHC's student newspaper, written by PHC’s journalism students and overseen by Associate Academic Dean and Professor of Journalism, Dr. Les Sillars.