The values of an educational institution will shape its students. It may sound obvious at first. But is it?

What the institution thinks about itself is not what shapes its students. What is articulated in the mission statement of an institution may be taking hold in the graduates, but it may not.

Also, what the institution valued in the past may not be what it values today. [How quickly we can see seismic changes in the values of institutions of higher education in America lately!]

An important way to see the guiding principles at Patrick Henry College—to see those values applied—is to look at PHC graduates.

We caught up with 2020 grad, Kyle Ziemnick, to explore how he is helping to preserve America for future generations.

Patrick Henry College's values have been upheld since its founding and are woven into the College's mission.

For Kyle, how are those educational values applied after PHC?

During and since Kyle's time at PHC, these values have consistently been taught through the classical Christian liberal arts core, and have made their way into practical, habitual routines in Kyle's life as a PHC alumnus.

Resting in Christ, working hard, and developing a spiritual life outside of a job or academic demands became central aspects of his life beyond PHC.

1. From academic rigor in the classroom to excellence in the workplace

Throughout his time at Patrick Henry College, Kyle embodied academic excellence, winning the Journalism award for the Class of 2020 and performing outstandingly in every arena that he was a part of. He served as editor of the student newspaper, The Herald, was captain for a highly successful mock trial team, and mentored a wing of students as a resident assistant.

“The academic preparation at PHC was amazing; critical thinking and a deep well of knowledge are super important,” Kyle said. “These will be four of the best years of your life; don’t live them half asleep!”

In his time after college, Kyle has continued that legacy of academic rigor by creating a track record of excellence in the workplace. After an internship with WORLD Magazine, Kyle joined their staff to help cover the 2020 election and other current events. He also appeared on a number of segments of WORLD's podcast: The World and Everything In It. Kyle worked with WORLD for the better part of a year. From there, he joined the Intercollegiate Studies Institute where he plans to work until beginning law school sometime in the coming year.

Kyle has a few other tips for PHC students, incoming freshmen, and anyone who wants to learn how to thrive in the world of academia: “Always talk to your professors. They will help you as much as they can if you only ask."

2. Continuing a fidelity to the spirit of the American founding

Kyle serves Intercollegiate Studies Institute (ISI) as a Program Officer where he helps foster student journalism and launch grassroots conservative publications on college campuses. Kyle regularly travels to different colleges to meet with students in person in order to answer questions, and also holds video conferences with students across the country.

During his time at Patrick Henry College, Kyle learned about topics like the integrity of the U.S. Constitution, the history of the United States, and the political theory that ties the two together. He learned the elements that make the United States the center of the free world and learned to defend the principles that make this country possible. It's his PHC training he's applying during his time with the Intercollegiate Studies Institute (ISI).

“We also have a couple of conferences every year where we bring in conservative journalists and speakers to help our students, and those are always a blast,” he said.

PHC and ISI share very similar missions. Both institutions recognize that liberty is under attack and that to preserve it, a new generation of leaders is going to have to step up. These leaders are going to have to understand what makes the United States stand apart from the rest of the world.

PHC's mission is "to prepare Christian men and women who will lead our nation and shape our culture with timeless biblical values and fidelity to the spirit of the American founding."

Similarly, ISI's mission is "inspiring college students to discover, embrace, and advance the principles and virtues that make America free and prosperous."

PHC and ISI have partnered together in the past and continue to aid each other in an attempt to preserve America for future generations.

Kyle's time at ISI signifies a continuation of the training he has received at PHC. By helping to start conservative conversations across the country, Kyle is planting seeds that preserve the spirit of the American founding in younger audiences. 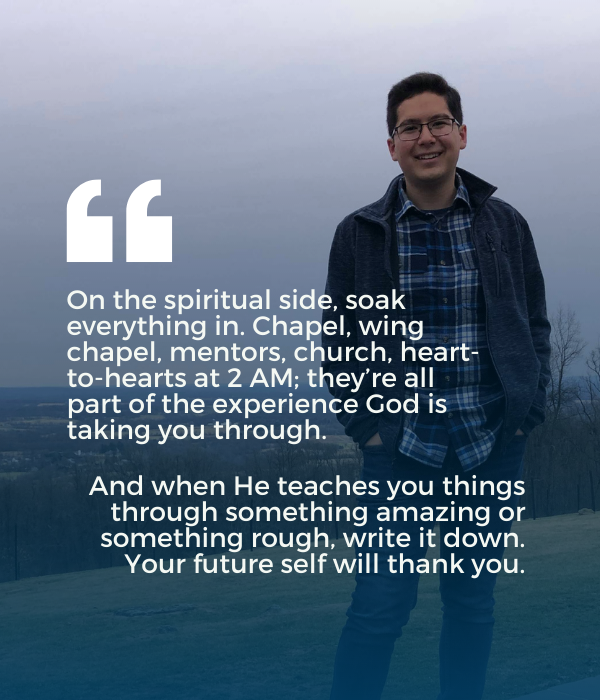 3. Living out a biblical worldview through fellowship

Kyle still misses some aspects of PHC—getting to hang out with the guys in the dorm has become a favorite memory. The time away from school has made him more thankful for the Christian community he was surrounded with during his college years. Patrick Henry College is committed to making the Word of God and fellowship with fellow Christians a part of the everyday life for students. But following graduation, it's up to alumni to decide how they will continue their spiritual journeys on their own.

“Moving on to any phase of life brings some loss,” Kyle said, “and that’s why finding a good church community after college is so important.”

As a resident assistant in the Student Life Team at PHC, Kyle led his wing not only as a social and academic guide, but also as a spiritual leader, heading up wing chapels on Tuesday and Thursday. He encourages students to actively look for relationships that will strengthen their character and deepen their faith.

“On the social side, be brave in stepping out to make friendships," Kyle said. "You will have a circle of close friends because that’s how we work, but don’t be afraid to reach out to those in need of a friendly conversation."

"Soak everything in. Chapel, wing chapel, mentors, church, heart-to-hearts at 2 a.m.,  they’re all part of the experience God is taking you through. And when He teaches you things through something amazing or something rough, write it down. Your future self will thank you.”

Thanks for being such a great example both here at school and in the workplace, Kyle!

To watch a video about another one of our alumni here at PHC, click below to hear about Meridian Paulton and her journey from PHC to one of the best think tanks in America—the Heritage Foundation.