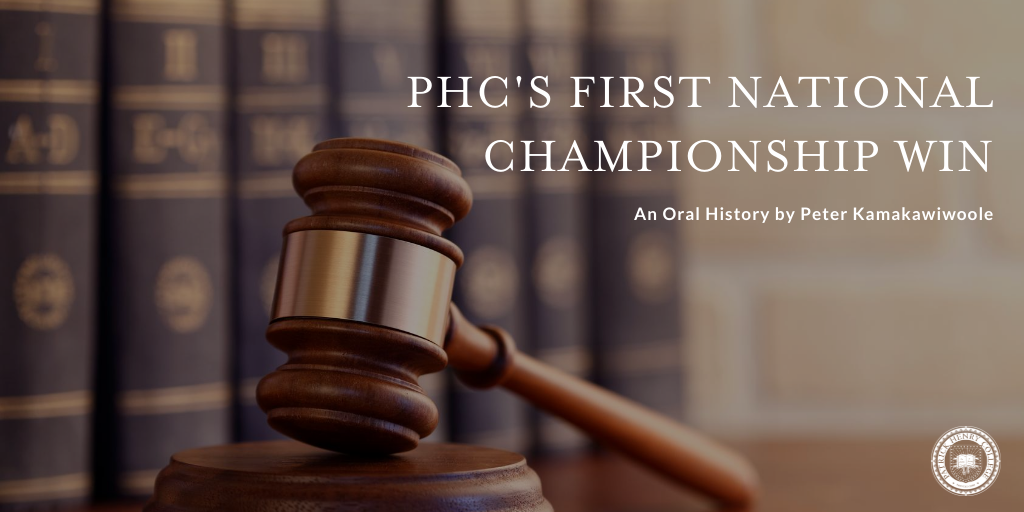 In 2005, two PHC students, Peter Kamakawiwoole and Sarah Piotrowicz (née Wilson), brought home our first American Moot Court Association (AMCA) national championship. We talked to Peter to get an account of what he remembers from that significant moment in our school’s history.

(Transcript edited for clarity and brevity)

I came to PHC in the fall of 2004, I probably shouldn’t have even been there [on the moot court team]. It was a really stacked team, the majority of people on the team were seniors who’d done moot court for years and years and years. I was brand new; I only got into Constitutional Law [a core class students take before competing in moot court] because I’d taken US History online before I got to campus. I really wasn’t supposed to be there to begin with. And it was just wild.

Sarah Wilson ('06), who I was the junior I was paired with, hadn’t done moot court at all that whole year. She came in over Christmas break and learned the whole case, read all of the materials, read arguments and everything. We did our first practice round down in the library conference room the week before we went out.

She was fantastic, she just carried everything. She had, I thought, by far the harder argument. The case that year was a CPS worker who’d gone into a house without a warrant and strip-searched two kids. And so she had the harder argument … She had to argue that it was fine. And she did a great job. I had the much easier job of just arguing that the law was muddy and murky, and nobody had any clue what was going on, so you could get off on a technicality.

I don’t remember a whole lot of [the tournament] except that Sarah and I kept moving on. That was probably the most unreal part of it—and it was a smaller tournament then. We just kept going, and I think in the quarters … we were the only [PHC teams] to get out of that, if my recollection is right. I sort of just looked around like, "Oh it’s just us, I guess."

Sarah had done really, really well, [earning second-place speaker]. She was just fantastic; you couldn’t ruffle her or anything. We got to the final, which was crazy. The College of the Holy Cross team that we met in the final had been the national runner-up the year before, and they were graduating seniors.

I got up to go second, and I did my intro, you know: "Mr. Chief Justice, and may it please the court," and I haven’t even said my name yet, and the judge asks me some question. My recollection is that it started something like ‘Counsel, we’re all adults here…’ The beginning really stuck with me because I had just turned 18, so I really wanted to say, "Well, actually, I’m not," but I couldn’t.

And it dawned on me [that I was an adult], so I think I said something to the effect of, "Yes your honor, we are," very enthusiastically. So I gave an answer to the question and then I remember being confused about where to go next, you know, I was trying to figure out: "Should I go back and say my name, or should I just continue?" I don’t remember what I did, but I think I just defaulted to going back. Once you’re through that, it’s sort of the first hurdle and then it was just in the flow, trying to do it. I don’t really remember much more beyond the start.

I’m pretty sure they announced [the results] at the end of the round, because they had done the speaker awards the night before. And so in that respect it was kind of nice because we sort of knew coming out of it, we had the rebuttal at the end, which I felt pretty good about. It always helps when you get the last word, and I felt the judges had asked us [and our opponents] some really good questions.

They announced [us as the winners], and the only thing I remember was Mike Farris coming down and giving us big hugs because it was the first time [PHC had won a national tournament]. The rest of the team joined as well. It meant a lot for them to come around, and it felt really surreal. I shouldn’t of been there, but for the other PHC teams to come and support us so enthusiastically was incredible. It surprised me at the time, but looking back on it now, it was the most natural thing in the world.

Want to learn more about forensics at PHC? Click here: