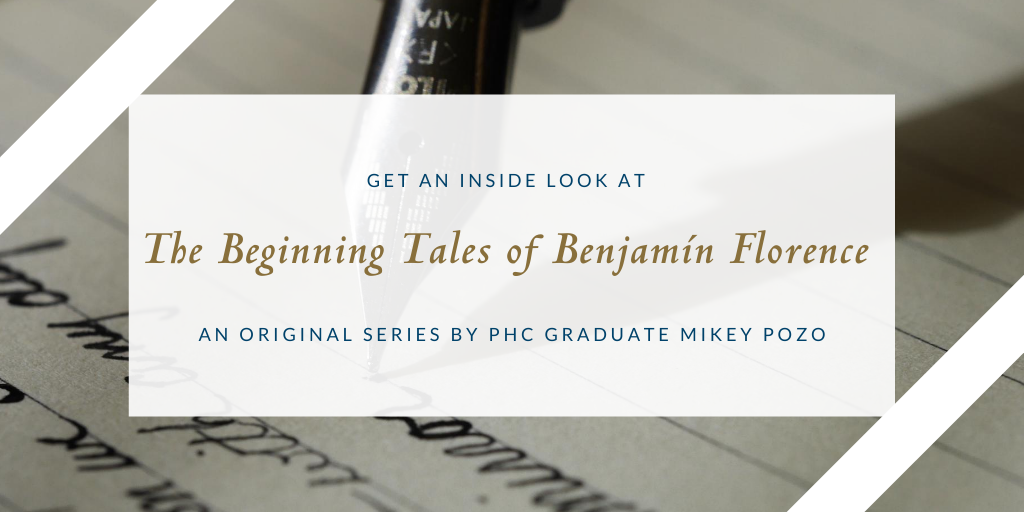 Recent graduate Mikey Pozo is currently writing The Beginning Tales of Benjamín Florence, the first book to a 13-part series called The Carinth Series. With the writing skills he learned at PHC and the help of Professor of Literature Dr. Cory Grewell, Pozo is well underway into writing the first few chapters of his book.

Q: What is your book about?

It's about a poor Peruvian boy named Benjamín who enters another world by going through a door connected to a tree. The rest of the story is about him trying to get back home with the help of an old man and a condor bird.

Q: Where did you get the inspiration for the story?

I had this idea years ago when I was in second grade. As the years passed, the idea grew into a great story with several characters and mythologies. I find inspiration everywhere, but most recently, I've been inspired by Gabriel García Márquez and his genre of magical realism. His writing style is so unique and complex yet so beautiful and palpable.

The pandemic has helped me as in my own solitude, I've managed to really smooth the rough edges of the plot, tension, and voice of my novel.

Q: How do you go about writing your book?

The ideas sort of pop up and whenever I'm able to write it, I'll put it down in my notebook and later in Word. I still get stuck, but it's not as bad as it was a few months ago when I could only look at a white screen, hoping the words would magically appear.

Q: Why is this book important to you?

When I first decided to write this book, it was because I wanted to make a character who was the better version of me, someone who I could only hope to become. But as the years went by, I realized that I had much in common with my character, yet still view him as someone who I strive to become. I also decided to write this book because I feel the need to write a modern classic, especially in the vein of Hispanic literature.

Lastly, I decided to write this book because like many Western Classics, it holds virtuous and Christian values hidden in the story. Especially in a time like this, the world is rejecting the goodness, truth, and beauty of what we've inherited.

I hope my book provides an appreciation for history, literature, myth, and ultimately God's goodness. The task is grand, and I cannot do it without the Lord's help.