Worth It? Pursuing a Passion for Ice Skating at PHC

Sophomore Aileen Haggerty stood in anticipation, surrounded by her 14 teammates, at the 2019 U.S. Nationals Ice Skating Competition. Each skater had their hair smoothed into a tight bun and wore flowing blue ombré dresses with white ice skates. When the judge announced their score, the girls screamed and jumped up and down, hugging one another.

They had received their best scores of the year.

“We had this really dark maroon lipstick [and] we were hugging each other,” Aileen remembered. “But we were on two different levels, so we were smashing our faces into each other’s arms. Afterward, our coaches were looking at our dresses and there were these lip marks on our dresses.”

Aileen, along with sophomore Jazy Manoukian and senior Kaitlyn Tully, is one of the few competitive skaters on campus who continues to practice the sport while at PHC.

Aileen started skating at age 4 in Los Angeles, California and continued to skate competitively into her senior year of high school. She tested into the top level for individual skating (Seniors) but mainly competed with her team in synchro.

Synchro is a 2- to 4-minute performance where 12 to 16 girls skate to a program of baseline elements each team must complete. The score is based not only on the team’s skills, such as turns and footwork, but also on the team’s costumes, expressions, and arm movements.

Aileen immersed herself in ice skating. Throughout high school, she practiced 6 days a week for an average of 3 hours. She trained both on and off the ice with practices starting as early as 4:45 a.m. Even after training hours in the morning, she mixed conditioning in with her school and dual enrollment classes.

“School was always number one, but skating was always a very, very close second,” Aileen said.

Jazy also started skating at age 4. But unlike Aileen, she didn’t start because of a personal interest. Her father, a professional ice skater with 2 national championships in Armenia and Kazakhstan, wanted to pass on his passion for ice skating to his daughter. “I was one of those kids: if my dad wants me to do it, then I don’t want to do it,” Jazy said.

She stopped ice skating at 8 years old, but picked it back up again around 6th grade. She advanced through the level just below Seniors and had begun learning double-jumps on the ice before she stopped again in 11th grade. The overly competitive attitudes of the other skaters made her dislike the sport. Since her father was her coach, their relationship also became strained. Competing wasn’t worth the negative effects, so she decided to stop.

Kaitlyn started ice skating when she was 3 years old and competed until she was 13. She competed in singles ice skating but left because of the lack of community surrounding the sport in Florida. Now in Virginia, she is trying to test into the third level: Juvenile. 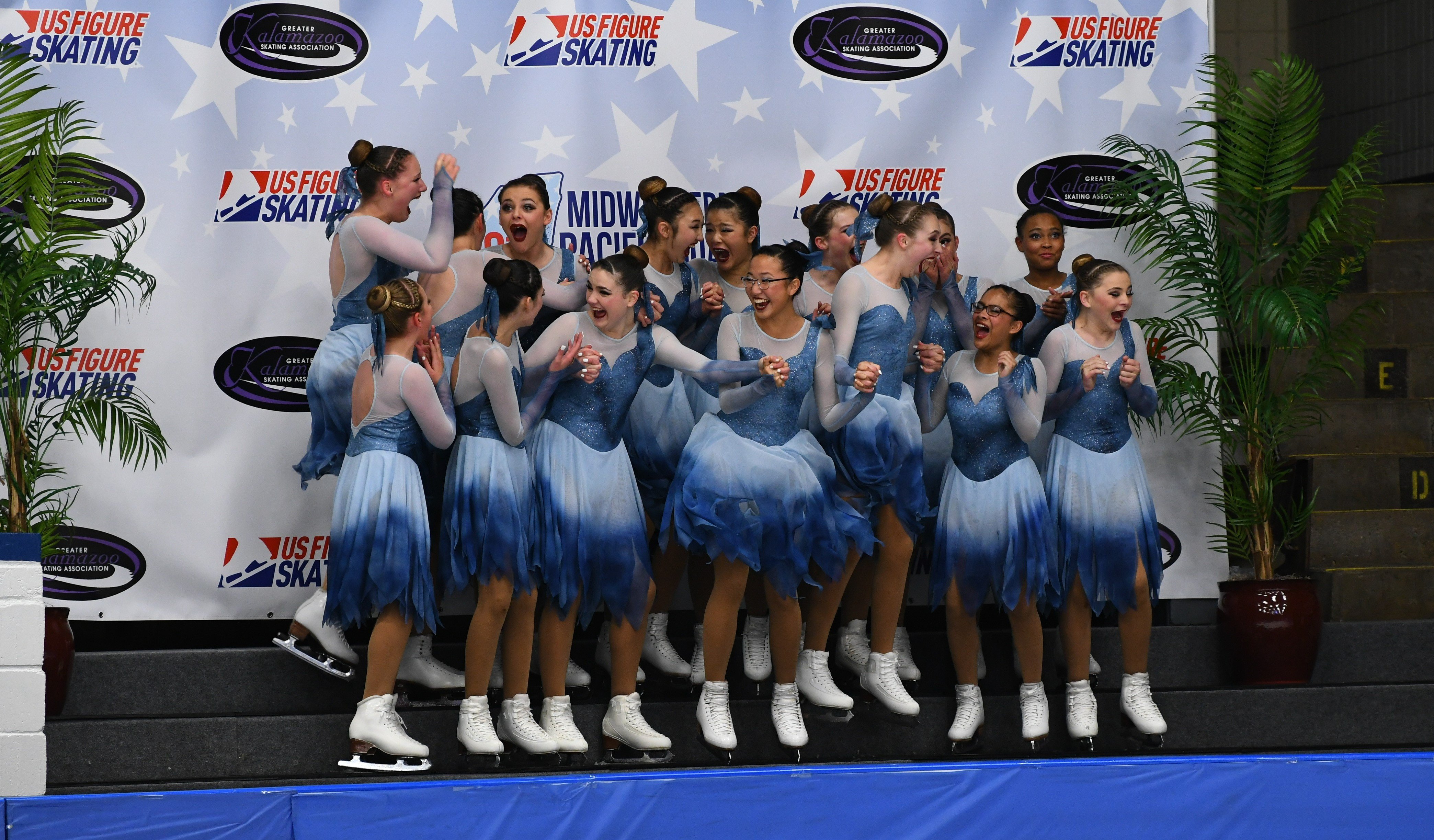 Aileen Haggerty (top, far left) and her synchro team upon hearing their score at the 2019 U.S. Nationals.

Kaitlyn's life didn’t revolve around skating, but she loved the creative freedom of being on the ice. “It’s an open space to do something beautiful and difficult and to keep trying, no matter what,” she said.

Her favorite memory came from her last show when she was 13. A song from The Polar Express blasted from the speakers as Kaitlyn completed a solo dance before leading a cluster of younger kids dressed in white snowflake costumes onto the ice.

All three students continue to skate at local ice rinks in Ashburn and Leesburg. Jazy realized she enjoys ice skating for recreation and not competition, especially when she is skating with friends on a frozen lake underneath a dark sky of stars back home in Wyoming. She also loves helping other people learn to skate. She feels like she is able to give back to her home community and helps people participate in wholesome family activities when she gives lessons.

Aileen, an American Politics & Policy major, chose to pursue her dream of becoming a lawyer at PHC, knowing that skating would become a hobby rather than a profession after college. Even so, she feels ice skating prepared her well for PHC. She learned to work hard, persevere despite failure, and make herself get up and go the extra mile.

She also learned to cultivate confidence by tricking herself into being excited instead of nervous, which was especially helpful during classes with public speaking like Recitation.

Through her time ice skating, Kaitlyn learned the importance of practice. Ice skating did not come easy to her. “It required dedication and hard work, and that took me years to learn,” Kaitlyn said. “That lesson is something I desperately needed.”

Jazy realized that while striving for high marks is important, it’s not healthy to pursue it in every single area of life. She knows she could have pushed herself even more during her years of competition, but it would have made her miserable. It would not only have had detrimental effects on her mentality and health, but also on her relationships with friends.

“You can push yourself beyond your limits… but is it worth it? Is it an area that you can thrive in and give the most glory to God?” Jazy said.

Currently, skating serves as a therapeutic break from the rigors of school for the three.

“I’m honestly not certain why I love it so much,” Kaitlyn said. “I think, in a sense, it’s just always been a part of me, and it’s a part of my life that is so full of memories that I can’t imagine giving it up again.”

This article was originally published in PHC's student-run Journalism publication The Herald.