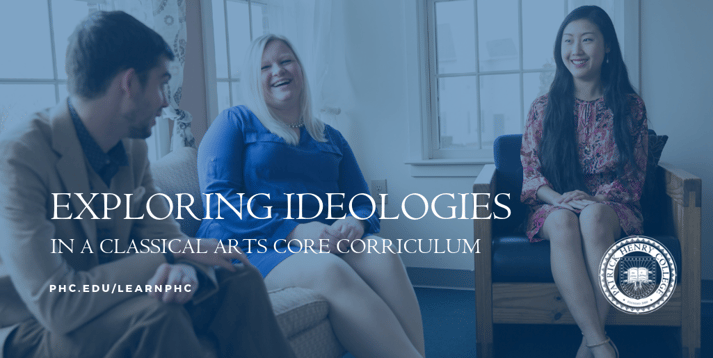 Patrick Henry College's core curriculum puts a large emphasis on recognizing and understanding the origins of beliefs and ideologies that shape the world. They shaped history too, and they’re worth thinking and reading about.

“There is no such thing as a new idea. It is impossible. We simply take a lot of old ideas and put them into a sort of mental kaleidoscope… We keep on turning and making new combinations indefinitely; but they are the same old pieces of colored glass that have been in use through all the ages.”

Whether or not Twain overstated his case is another topic altogether. One thing is for sure, tracing ideas back to their philosophical antecedents a key step in understanding the ideas themselves. Here's how looking back nurtures and prepares students at Patrick Henry College.

Just recently, the United States Celebrated the 50th anniversary of the Apollo 11 moon landing. There was a lot that went into putting a man on the moon and a lot that came out of it. In one sense, you could choose to look at it just as a stand-alone landmark in human achievement. But in light of the Cold War, the Berlin Wall, the Arms’ Race, and the Cuban Missile Crisis, Apollo 11 was a child of confidence, fear, nationalism, a feeling of American exceptionalism, and so much more.

Ideas have always driven the current events of the United States. Understanding those forces is key to knowing the basis of so many profoundly influential moments in the Nation’s History such as the War for Independence, the Civil War, and others. Analyzing and appreciating these ideas gives new context for where we are now—the ideas and beliefs acting on a 2019 United States.

By studying subjects like History of the United States, political philosophy, and Western Civilization, students at Patrick Henry College will have a good idea of where history has been in the past and how it has been shaped and changed by the influences around it.

Preparing for the Future

But looking at the past for new perspective without applying it to the future would be futile. In addition to evaluating formative elements of the past, students at Patrick Henry College will be trained to think critically about present-day issues and topics to ensure they are ready for wherever God may take them next.

First and most importantly, PHC will give students the tools they need to defend their beliefs and give them a way to present a reason for the hope that is in them (ref. 1 Peter 3:15). Through classes like Principles of Biblical Reasoning, Theology I and II, and others, students will be able to give a response to cultural currents that may be opposed or even hostile to a biblical worldview.

It’s one thing to be aware of cultural influences and it’s another to be trained and ready to respond. Working from a biblical base, students will then take classes on their individual majors. Entrepreneurs, journalists, politicians, all come out of PHC with an ideological confidence that's hard to find elsewhere.