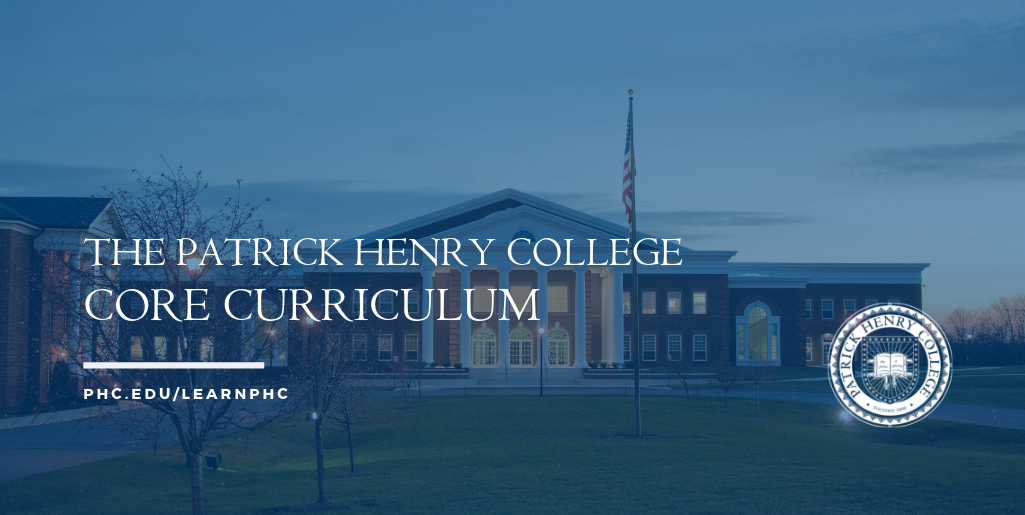 Composed of 63 credits of classes, the Patrick Henry College core curriculum is designed to give students a rounded, holistic foundation—regardless of what major students may end up choosing. It's this core that ensures that every Patrick Henry College graduate has the ability to perform at the highest levels and deliver in whatever circumstance they might find themselves in.

A Program that Builds on Itself

The experience at Patrick Henry College—and especially the core—is designed to build on itself. As students continue taking core classes, they will apply previously-learned skills and ideas they to new subjects. It’s an extremely interdisciplinary approach to a college education.

Students will go on to be trained in journalism, government, business, and other topics of study. By the time they graduate from Patrick Henry College they will have experienced an extensive base which will facilitate an approach or an introduction to almost any subject of interest. It’s a philosophy of education that teaches students to think critically and draw connections between subjects.

It can be a common temptation to see education as a process which happens in the present without any connection or sense of continuity. But that’s simply not the case. For thousands of years, people have been asking important questions and trying, once in a while, to provide answers. As a result, today’s classes are largely a result of yesterday’s books and ideas. The Western Liberal Arts revolve around the premise that the current generation isn’t the first one to meet with questions worth exploring or ideas that merit consideration.

This helps students critically evaluate the questions of today.

Students at Patrick Henry College will leave with a sense of responsibility to cherish the present, respect the sacrifices of the past, but also understand that they have a certain duty to the future. The core is designed to show students that regardless of topic or subject, there’s a history to how we are where we are today and that it's worth protecting.

Focuses on the Greats

One reason PHC’s core is so extensive is that it focuses on the “the greats.” These are the men and women who contributed to the formative events of their day. Quite frankly, there’s a lot of them.  There’s George Washington, George Orwell, George Frideric Handel, George Washington Carver, and the list keeps going. And that's not mentioning Plato, Alexis de Tocqueville the host of other brilliant minds that could also be mentioned. In subjects like biology and geometry, the great discoveries and mysteries of how the world works also deserve an introduction. There’s so much that is covered and still more that could be.

The point is to enrich students' minds. The core aims to set their eyes and thoughts on some of the best ideas and books mankind has to offer in the hopes that they would learn to appreciate and mimic them.

63 credits might seem like a lot—and it is. It pushes students to learn things they’ve never experienced before, allows them to re-evaluate old beliefs in a new light, and gives them an incentive to keep learning even after their time at PHC. The core is a central part of the Patrick Henry College experience, a catalyst for both personal and academic growth.

Click here to continue learning about PHC’s core curriculum and get a better of what it looks like in practice!

Patrick Henry College exists to glorify God by challenging the status quo in higher education, lifting high both faith and reason within a rigorous academic environment; thereby preserving for posterity the ideals be

hind the "noble experiment in ordered liberty" that is the foundation of America.