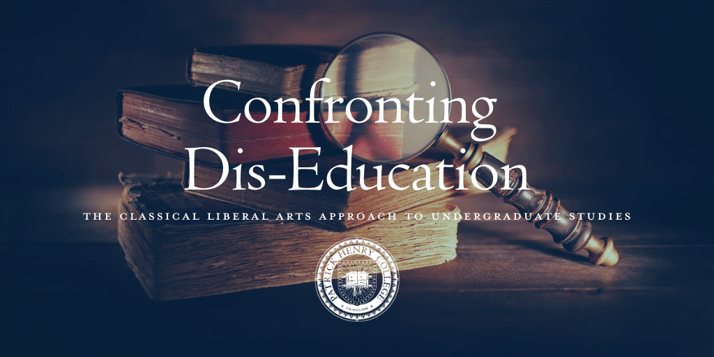 Associate Professor at Jones School of Law Adam J. MacLeod, lamented his students' inability to think and process ideas outside their sphere of opinion, a phenomenon he referred to as “dis-education.” MacLeod writes, “Most of them cannot think, don’t know very much, and are enslaved to their appetites and feelings.”

The real culprit is a deeper problem—one that MacLeod had to “weed” out of his student’s minds. “You have learned to associate truth with your subjective feelings, which are neither true nor false but only yours, and which are constantly changeful,” he said.

The continuation of dis-education is in direct opposition to a classical liberal arts education. Deeming concepts that one does not care to understand as “isms” (racism, sexism, etc.) does not promote thinking, rather it is prejudiced ignorance.

A classical liberal arts education seeks to inform students' knowledge of the present by allowing them to benefit from the knowledge of the past. However, MacLeod describes a form of dis-education that rejects this paradigm called “chronological snobbery.” It refers to a belief that the moral knowledge of past societies are inferior to those of today.

Instead of talking about their feelings, MacLeod told his students to think about concepts and opinions that they disagree with in order to understand them. Through this process, students can begin to think and eventually acquire knowledge.

“Only the person who exercises practical reason and attains practical wisdom knows how first to live his life, then to order his household, and finally, when he is sufficiently wise and mature, to venture opinions on how to bring order to the political community,” MacLeod said.

The prevalence of dis-education has led to a void in America’s system of higher education, and most importantly, in America’s leaders.

When Patrick Henry College was founded, its leadership recognized this void in higher education and sought to fill it by providing young Christian men and women with the education and strong biblical values they need to make a positive impact on the world.

“…the classical liberal arts—with a strong Biblical foundation—is at the heart of PHC’s educational philosophy,” Dr. Gene Veith describes in PHC’s Philosophy of Education. The broad 63-credit core curriculum is designed to provide students with an opportunity to engage with topics in both the “Natural Sciences” (biology, physics, philosophy) and the “Moral Sciences” (history, law, and the humanities).

PHC informs students from a biblical worldview. However, instead of excluding other viewpoints, it actively engages them in the classroom. Students are exposed to the greatest minds of Western Civilization, from Socrates to Nietzsche. The core curriculum allows for students to have a vast and deep knowledge of many areas of study and specialize within their respective majors. For this reason, “a Patrick Henry College education is unusually comprehensive, rich, and effective,” Veith said.

“Premier institutions have bowed to shifting cultural norms and abandoned the idea that absolute truth is essential to education,” President Jack Haye said. “The void in higher education created this vacuum of leadership. Our nation no longer produces guardians of liberty.”

Through high academic rigor, fidelity to the spirit of the American founding, and an unwavering biblical worldview, PHC seeks to truly educate its students in a way that challenges their perception of the world and guides them toward truth.

Dis-education is becoming more and more prevalent in America’s colleges and universities. Opposition is needed to preserve America’s foundations.

Click below for more information about PHC's core curriculum!