Why Classical Education Is Important 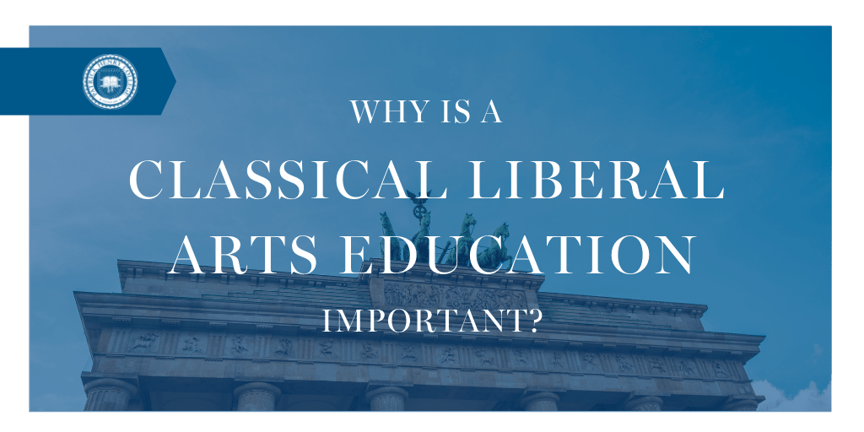 What Is A Classical Liberal Arts Education?

Alumnus Matthew Boles (’16) described the liberal arts education as “the study of all things – the core principles to being an enriched human being.”

A classical liberal arts education finds its roots in antiquity, believing that a certain set of practices were necessary to be a free person. The American Founders’ fight for freedom was rooted in this classical education. They studied Greek political philosophies and Roman Republic thinkers, concluding that a free people must have the ability to govern themselves. This freedom, or liberty, is rooted in the ideal of “liberal” education.

"The classical style of education gave us the Protestant Reformation, the Renaissance, and the Founding Fathers. Classical education gave us our civilization. It encourages critical thinking and fosters a creative application of knowledge so that we aren't swayed by the currents of culture. " - Gene Edward Veith, Professor of Literature and Provost, Emeritus

The classical liberal arts—with a strong Biblical foundation—is thus at the heart of PHC’s educational philosophy.

Patrick Henry College’s academic program is a distinctive Christian Classical Liberal Arts, complete with a rigorous 63 credit Core Curriculum plus intermediate foreign language proficiency. The liberal arts stress excellence, the pursuit of knowledge, and the exercise of God-given talents. The extensiveness of the core curriculum enables students to explore the connectedness of all the disciplines, thus enhancing their understanding of the world.

The classical liberal arts core curriculum is a true core—every student takes the same classes and build a common foundation.  This means that students' basic learning experiences are ubiquitous across all majors.

"The fear of the LORD is the beginning of wisdom; all those who practice it have a good understanding." (Psalm 111:10) The Bible offers the ultimate vision of truth that surpasses what merely human ideologies can provide. It is the standard of truth by which all else is judged and learned.

The apprenticeship requirement, in which students creatively apply their knowledge and understanding in a real-world context, corresponds to rhetoric. Thus, a Patrick Henry College education is unusually comprehensive, rich, and effective.

And while acknowledging the Aristotelian notion that liberal education pursues knowledge as an end in itself, Luther related the concept to his doctrine of vocation. He maintained that cultivating one’s God-given talents by means of the liberal arts can equip Christians for whatever arena of love and service to the neighbor that God calls them to (Veith 2006).

Find out more about our world-class academic programs below!