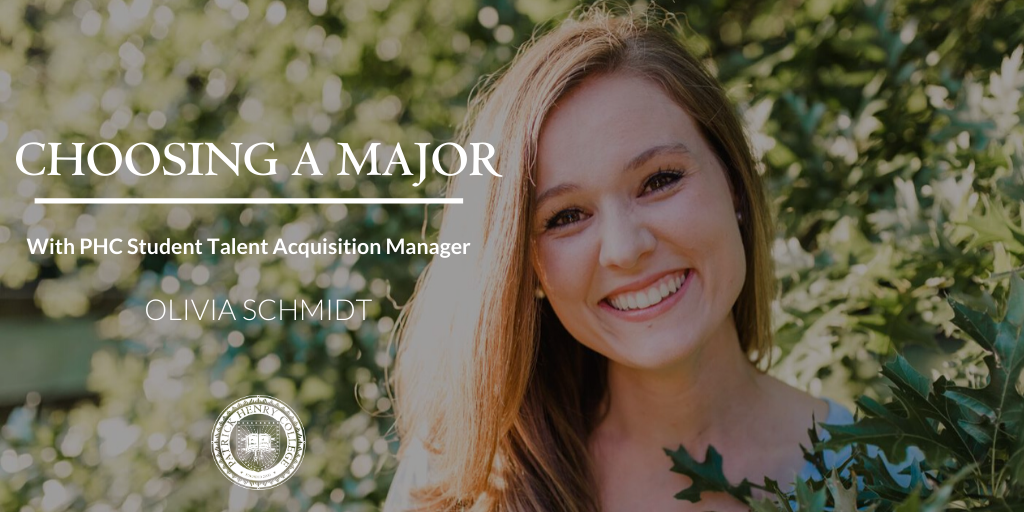 Choosing a major can seem daunting. It’s hard to know what major will be the best fit for you, offer the most ideal job opportunities, and inspire you to learn. PHC alumna and Student Talent Acquisition Manager Olivia Schmidt has some insights to share on making the best decision.

Schmidt had not originally planned to move out of California for college, but when she was 10, she read Do Hard Things, a book by Brett and Alex Harris on combating the idea of adolescence as a vacation from responsibility. “That just immediately piqued my interest," she said, "and I just thought, 'These are definitely the type of people that I want to be someday.'"

When she discovered that Alex and Brett attended PHC, she was intrigued. She began to look into the school, visited the campus and went to Teen Camps. Later, she decided that PHC was the school for her.

But then, she had to choose what to major in. Initially a History Major, Schmidt began to wonder if that was the right fit. As she learned more about herself, she discovered that she wanted to be able to understand different people and where they came from and be able to lead them to the gospel.

She ended up choosing the Cassical Liberal Arts (CLA) Major. “I found that the different subjects contained within the CLA major: history, and literature, and classics, and philosophy, and the biblical aspect… all were elements that could inform a really well-rounded worldview,” Schmidt said.

When she was weighing the pros and cons of what major to choose, she found that the best practice was to “develop intimacy with the word of God and make it a part of the fabric of your life.”

Schmidt says that using the question “What do you want to do when you grow-up?” as a metric for deciding what to major in, “is actually pretty flawed.” Instead, she urges students to think about cultivating their character through their relationship with Christ.

“I encourage people to just stay close to scripture because God promises that scripture is a lamp to your feet and a light to your path. So there’s really, I think, no better way to understand God’s calling for your life,” she said.

God has already written our story, but “college is actually a place where your character and the way you think and how you relate to God is really shaped and honed, and hopefully that’s something that continues to get honed for the rest of your life.”

While making her decision, Schmidt found that frequenting Chairman of the Department of Classical Liberal Arts Dr. Favelo's office was helpful for getting direction and wisdom. “What was great about Dr. Favelo is that he was concerned much more with the overall direction of my life and my posture towards the Lord rather than which field I ended up in,” she said.

He didn’t ask her what she was good at or what she wanted to do with her life; he asked her what she was learning on an emotional and spiritual level. When she came to him with the idea of majoring in CLA, he was able to confirm to her that, “If you love ministry, and if you love people, that is going to be a great choice for you.”

Don’t Be Afraid to Choose What You Love

Schmidt encourages students to first turn to scripture and center their faith in Christ, “but then on top of that just pick the major that you think is going to make you the best disciple of Christ possible. For a lot of people, that means just doing what they love,” she said.

She explained that God has designed everyone with certain desires, gifts, and opportunities. “God is the author of your affections, and He is the author of what you’ve decided. Study what you love, study what you think is going to make you the best disciple of Christ possible. Study whatever excites you and gives you a fuller version of Him,” she said.

The advice Schmidt typically gives students about picking a major is “don’t rush.” At PHC, students have two years before they need to declare a major, giving them time to make the best decision.

Expecting yourself to know at 18 what you’ll want to do for the rest of your life is unreasonable. Instead, she urges students to take their time to learn and “to understand what makes you excited and to search out the things that you enjoy that God has given you.”

Schmidt advises that students see college as a gift and not something that is owed to them. “Approach every day with a sense of gratitude and a realization that your time is limited in college… You’re never going to have an opportunity like this again to just let your intellect and your mind run wild, so, don’t waste it.”

Don't fear that declaring a major will lock you into a narrow career path, one you may want to change later. Patrick Henry College's 63-credit core gives students the tools they need to think critically in any position.