Finding Opportunity in the Mundane 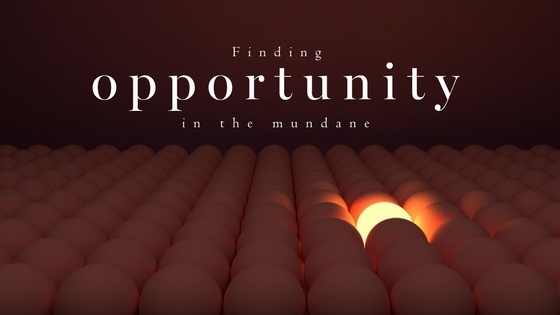 A month ago, I watched the majority of my former classmates literally pack up their lives and move away to whatever new thing that they had planned—jobs, grad school, traveling, and more. Not much has changed for me, however. I’m working on campus, living in the dorm, even taking a course on the side (for fun). There are a handful of circumstances that can make any recent grad question their path, or lack thereof. One of them is being a temporarily employed, day-old graduate sitting in a dorm room stripped of everything that for the past nine months made it a home, listening to the silence of an empty hall that once reverberated with the sounds of laughter and life.

An apt quote on the wall of my freshman-year hall read, “Comparison is the thief of joy.” It’s easy to feel dissatisfied with our first gig(s) as college students and then as new grads if we’re not where we thought we’d be—even if we don’t know where that somewhere is. Our problem is that we only see the forest for the trees. Once we diagnose our main situation (“This internship/job isn’t where I want to be”), that becomes all that we can see. If you’re in a situation like mine, you finish your workday so that you can job hunt. You shuffle around work hours so that you can go on job interviews. You use lunch breaks to meet with the older and wiser for job advice. You focus on the future and on yourself (“What do I want to do?”) at the expense of the seemingly mundane present.

It’s tempting to tune out the portion of the present that we find dull by zoning out and going through the day on autopilot. However, doing so means forfeiting what we’ll never get back - the opportunities of the moment that require more than going through the motions.

My mother has a story about how maintaining focus at an unremarkable job of hers yielded an unforeseen benefit—for me. She used to be employed as an insurance adjuster handling workers’ compensation claims such as those made by firefighters and restaurant employees who had suffered severe burns. She worked hard but it was just a job for her; a friend at the agency told her to apply, and she took the position even though it wasn’t her dream job and she thought that it was unrelated to her course of study (marketing).

Fast-forward to a few years later when my mom had left the job to raise her twins. On that particular day, she was alone with the two of us (we were a year old at the time). The day prior, my brother had discovered that he could get out of the crib if he climbed on top of me. Remembering his newfound escape trick, my mom kept both of us with her while she warmed our milk instead of leaving us in the crib. She placed the first bottle in a mug of steaming hot water and set it on a hand towel on the counter, then turned to prepare the second bottle. A moment later, she heard screaming—I, being hungry for my meal, had pulled at the towel and upset the hot water all over my face and neck.

My mother says that the moment she saw what happened, everything that she learned and did as an insurance adjuster snapped to the front of her mind. From the regular, company-wide first aid workshops, she knew to cover my burns with a cold, wet cloth instead of putting ice on them. From the dozens of case files that she handled, she knew the name of the best burn center and the best doctor in the area. From the hours on the phone with claimants, she knew how to negotiate with insurance to get a nurse to dress my wounds after I came home from the hospital.

I’m fortunate that my mother was attentive to her job as an insurance adjuster and, in her words, “bothered to learn it.” She (and I) ultimately benefited from her focus on her then-current position even though the job was merely a stopgap. My face healed without scarring, and I bear only a very faint mark from the accident. I’ve had my moments of sitting in an exam, staring at a problem on the page before me and knowing that I knew just enough about the problem to know that I couldn’t answer it. I’m glad that on that day that I was burned, my mother didn’t have to watch the scalding water scar her daughter’s face while grasping at whatever knowledge of burn treatment that she couldn’t quite remember because she zoned out at her job.

You may not acquire life-altering information and skills at every place of employment. However, every job opportunity remains an opportunity even after you accept it, and even when you start searching for another job opportunity. It’s an opportunity to learn from both coworkers and clients. It’s an opportunity to innovate more efficient ways to complete those repetitive daily duties. It’s an opportunity to work hard, not merely as a means to earn pay or recognition, but as an end in itself—for no other reason than exerting both mind and body to their fullest extent in completing the task at hand with excellence. Looking forward to the next steps in your career is important, but don’t be so focused on what’s ahead that you disregard what’s in front of you.

You may find that it’s not so mundane after all.