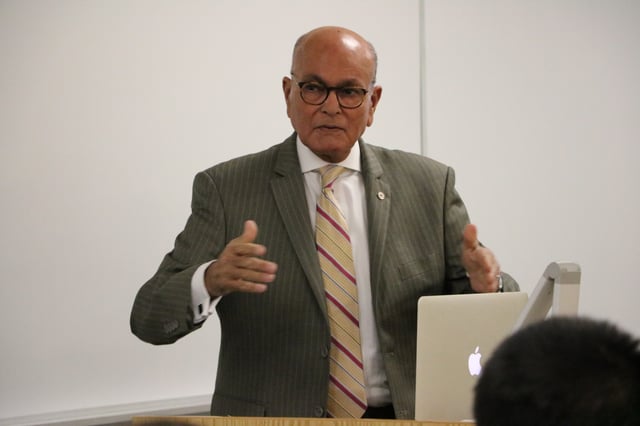 Saada shared his story of salvation and life with Christ after spending several years as a young man in the Palestine Liberation Organization, including work as an assassin, a chauffeur for a top PLO leader, and as a participant in various anti-Israeli activity.

Eventually, Saada moved to America, met his wife of over thirty years, and climbed the ladder of success in the business world. A long-time friend lead him to the faith through reading the first chapter of John’s gospel. Through that experience, Saada learned the incredible value of loving all people as created in the image of God, regardless of their religious beliefs — including the Jews he had learned to hate so deeply.

Saada emphasized that the conflict did not originate in the 1940s, as politics would have us believe, but rather in the moment Abraham rejected his first son, Ishmael, and gave his inheritance instead to Isaac.

He and his wife now reside in the West Bank, encouraging reconciliation through education. Their ministry, Hope for Ishmael, provides hope, empowerment, and encouragement for hundreds of Muslims in the local community, as well as volunteer and teaching opportunities for willing individuals.

Saada has published two books, The Mind of Terror and Once an Arafat Man.

Learn about PHC's international impact by clicking the button below!