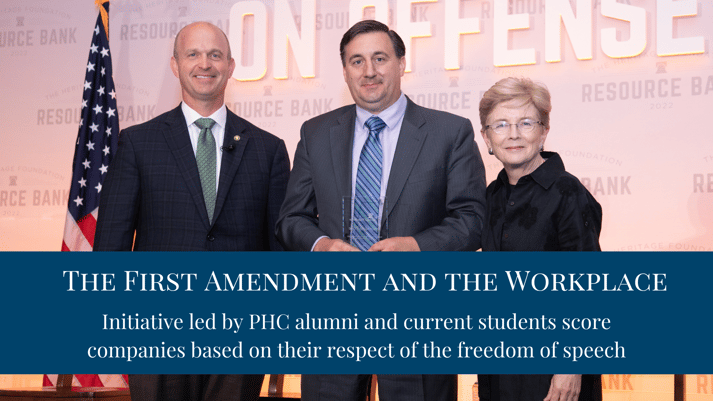 The goal of ADF’s Viewpoint Diversity Score is to analyze whether American corporations with large market shares work to protect diversity of opinion, or whether they choose to stifle free speech. A primary element of ADF’s strategy is creating a Business Index. “The Business Index is the first comprehensive benchmark designed to measure corporate respect for religious and ideological diversity in the market, workplace, and public square,” said Daniel Cochrane (‘19), who played a leading role in developing the criteria and overseeing research for the Viewpoint Diversity Score Business Index.

To determine how companies impacted freedom of speech in the marketplace, research analysts and interns analyzed many Terms of Use and Service agreements, looking for account creation and content censorship requirements. They researched whether companies respected viewpoint diversity in the workplace or whether they restricted employees’ speech. They poured over proxy statements and legislative records to determine whether companies attempted to influence the public’s freedom of speech.

The team developed a 42-question rubric and scored 50 Fortune 1000 corporations primarily within the tech and financial industries. Each question in the rubric was written with an ideal company that respected freedom in mind. “What would it mean for companies to respect freedoms?” Cochrane and his team asked. They determined it would look like “taking out a lot of the vague terms in policies, providing equal opportunity for religious and nonreligious resource groups, ensuring [a company’s] charitable giving and political spending aren’t disproportionately supporting organizations seeking to censor people because of their political views.”

Overall, the results of the Business Index were sobering. The average company ranking was only 12%. However, PHC alumnus Keith Zimmerman (‘18) and PHC senior Hope Turner agreed that the goal was not to shame companies that received low scores. “It’s not that we’re trying to get the companies in trouble,” Turner said. “We want them to understand they have a role as a leader. Companies aren’t the government, so they’re not bound to [First Amendment] principles. However, if they protect [those principles] or don’t, that’s a huge indicator of whether the country is going to follow.”

The Business Index serves to call companies up. As a means of helping them do so, the team crafted model policies and standard best practices which corporations can adopt that intentionally protect viewpoint diversity. “It’s more than the score. I’d love for a conversation to get kicked off about it,” said research analyst Georgia Cline-Miller (‘18). “We want the people on the other side of it to look at us and say, ‘You’re not interested in bashing me, but in making me better and helping my employees. We’re hoping that gives a good relationship with us for future conversations.”

The team has already begun the research for next year’s scores.