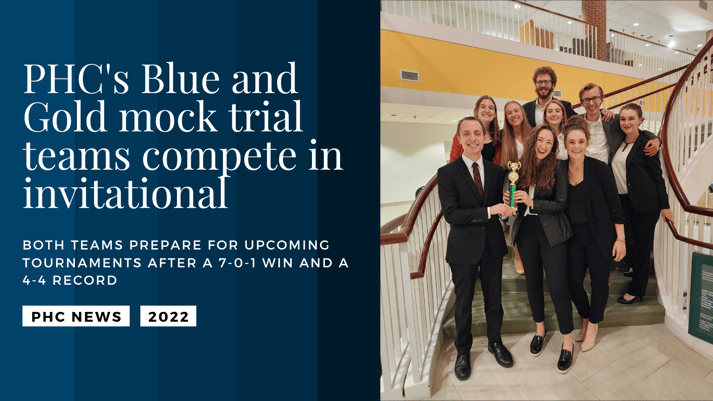 The Blue team won the invitational with a 7-0-1 record, and the gold team performed well and finished with a 4-4 record. Sophomore Sarah Fox and junior Ben Oyer won attorney awards, while junior Sarah Crosby won a witness award.

"I was incredibly pleased with everybody's performances at this tournament," said Ben Oyer, one of the blue team's captains. "We worked . . . a long time to get here . . . we did a lot of drills, scrimmages, and extra practice sessions. Everyone put in lots of effort, and that effort paid off."

William & Mary's campus fell under a shelter-in-place order during the second mock trial round on Saturday due to an anonymous threat to burn or bomb one of the buildings on campus. Fox, a member of the Gold team, recalls that her team was in a room with a lot of windows when the news of the bomb threat came. They turned off the lights and sat in silence. "We ended up sitting in there for like an hour silently," Fox said. "All of us [were] secretly . . . doing our memorization."

Both teams relied on the Lord for strength and peace and competed with excellence. Despite various challenges, they competed with skill, confidence, and courage.

"I think it's very important to have the right attitude about mock trial . . . the reason we do mock trial is not to win a certain number of ballots," said Finn Buck, one of the gold team's captains. "Our goal should always be to perform to the best of our ability—by the grace of God and for God's glory."

Parts of this story originated from PHC's journalism publication, the Herald.