God's Unfolding Story: A Note from the President 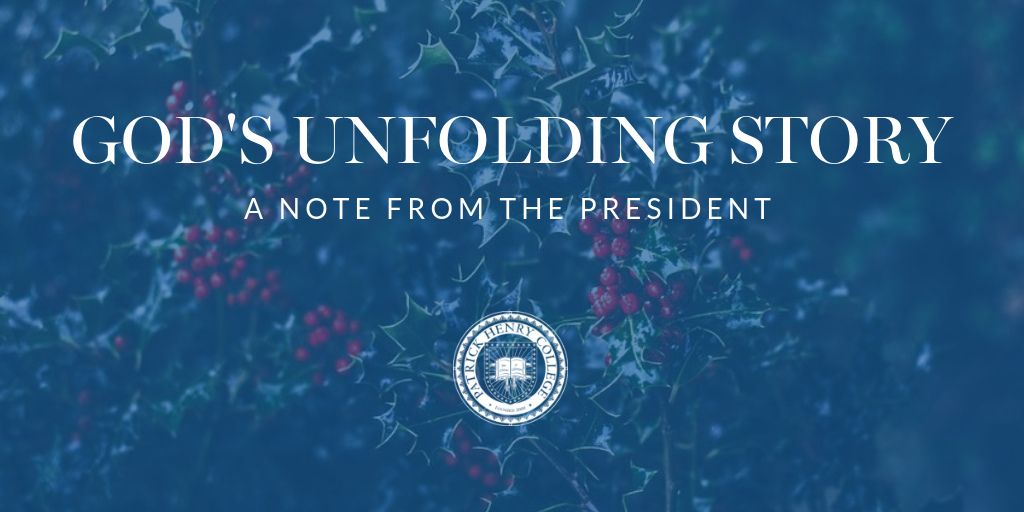 I love Christmas Eve!  When our children were young, however, it was often a time that required great bravery as I would come face-to-face with the three most dreaded words known to mankind on Christmas Eve: “Some Assembly Required”. As our children grew older, we discovered that we could use their yet-to-be-assembled toys as a “learning experience” and let them help put things together … That was always more fun and it also meant that I could get in bed a lot earlier on Christmas eve!

One of our favorite Christmas Eve traditions is to gather in the barn and read the Christmas story by candle light.

There is something about the sounds and scents of animals in their stalls that brings home the reality of that first night in Bethlehem. The profound humility of His coming. The intentional vulnerability of God Incarnate whose birth was to be heralded not by a carefully choreographed display of pomp and splendor that all would cause all to set up and pay attention but rather by a heavenly host that would appear to a small group of simple shepherds tending their flocks on the Judean hills.

How odd the message of the angels must have seemed to them. The long-awaited Messiah was to be the one to come to take care of the bad guys and put the good guys in power (according to Isaiah’s prophecy). Right? And yet the angel had clearly said that they should go to Bethlehem and look for the newly born Messiah who would be lying in a feed trough.

And that is exactly how Jesus, God Incarnate, was born; in humble surroundings in an obscure village filled with frustrated people who were being forced to show up for a census. They were no doubt wanting the process to be over with so that they could just get back to their normal lives of just existing. Long past the time of hoping for anything really different to happen. Content enough to raise their families, tend their flocks, provide for their children and maybe pass along a few traditions that had long since lost their deep meanings.

And yet nearby, God interrupted time and enlisted an unlikely troop of heralds (shepherds) to be the first to both hear and to make the announcement that Emmanuel, God with us, had been born!

An obscure town, and unlikely mother. No kingly welcome. A humble birth in a cave full of farm animals.  Not a palace where He would learn military and political strategies. He would instead grow up learning the trade of His earthly father and then when He was 30 years old He would begin preaching that God’s Kingdom had arrived on earth.

Those harried pilgrims in Bethlehem that night were not unlike most in our world today; tired of the crowded shopping, the obligatory parties, the unmet expectations, the Christmas songs on the radio. Just ready to get back to “normal”. And yet, like that night in Bethlehem, God’s redemptive story is unfolding around them. This time, however, we are the unlikely heralds who have been tapped to bring the Good News, as improbable as it may seem.

It is the Good News of hope that is rooted in God’s unfolding story of Redemption; seen in His promises from the past, confirmed by His presence with us today, instilling hope for  the completion of His Story in the future. It is the promise of God’s presence in the midst of difficult circumstances—sometimes delivering us from our circumstances, and sometimes redeeming us as we experience His presence and peace as He walks with us through our circumstances.

Christ is the crescendo of God’s redemptive story. It is just as easy today for us to miss Him, however, if we are looking in the wrong places.

If we become disillusioned when God doesn’t show up in a way and according to the  timeline that we would use if we were running the universe.

If we find ourselves deeper and deeper into the gravitational pull of the world, which sings its siren song. “When in Rome…”

If we find ourselves tempted to just fade into the woodwork…

If we allow the noise and bustle of the season to obscure the simple message:

God so loved the world that He gave His only begotten Son that whoever believes in Him should not perish but have everlasting life.

So, as you gather with your family and friends this Christmas Eve, my prayer is that you will experience warmth, the excited voices of children, joy, and above all, a glimpse of the peace that Christ’s birth came to offer—a peace that transcends the noise of a troubled world and reminds us that God has come to dwell among us and that He is unfolding His story of redemption all around us, often in the most extraordinary, unrecognized ways.

How silently, how silently this Wondrous Gift was given

Yet, God imparts to human hearts the message of His heaven

No ear may hear His coming

Yet in this world of woe

Where meek souls will receive Him

Still the dear LORD enters in.

If you enjoyed this post, read our Director of Communication's Meditation on Advent here...