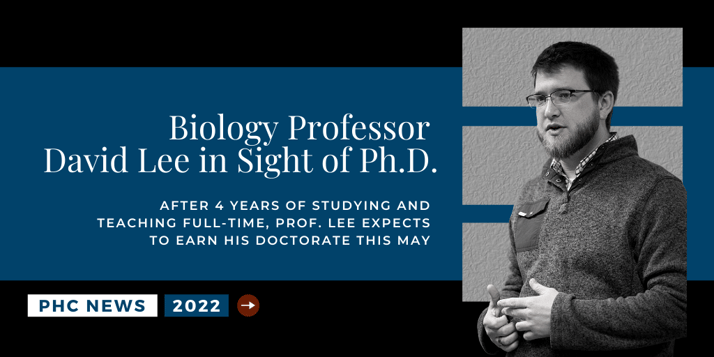 After years of dedication, Biology Professor David Lee expects to earn his Ph.D. this May.

Lee received his undergraduate degree in Geology from Clemson University. He then went to the South Dakota School of Mines and Technology to earn his first master’s degree in Paleontology and back to Clemson for a second master’s in Biology. He is  earning his doctorate in Education with an emphasis in Curriculum & Instruction at Liberty University.

Lee’s education journey shifted a few times from his initial plans. He had little interest in teaching, but unintentionally discovered that he was well suited for it during an internship at an active paleontological dig site in Hot Springs, South Dakota.

His responsibilities included excavations, lab work, and tours. He was looking forward to the lab work. “I thought I was going to hate [the tours],” Lee said. “But the opposite happened. That was a surprise.”

Lee found that he really “came alive” when giving the tours. This led him to switch from research to pursuing teaching as a career. The original plan was to teach high school students. Soon after getting married, Lee and his wife moved to Virginia anticipating a different job opportunity and were waiting for things to work out.

Around that time, Patrick Henry College's Biology professor left before the next semester. The college needed a new teacher quickly. Two and a half weeks after first hearing about the position, they had found a house and Lee was in the classroom.

Lee has now been with the college for close to eight years. "I believe this was divinely appointed; we were waiting and God dropped it in our lap," Lee said. “It’s been such a blessing."

Around 88 percent of full-time PHC professors have a terminal degree—they've received the highest academic degree possible in their field—and zero of the college's classes are taught by teacher's assistants. Teaching at PHC was one of the motivations for Lee to get his Ph.D. as well.

Lee has been working toward his Ph.D. for nearly four years while simultaneously teaching full-time. Between these two responsibilities, he finds himself frequently taking work home with him. To mitigate a full work load, Lee said it is important to take advantage of any spare rest times, such as in between classes. He keeps calendars to help with deadlines and focuses on keeping a routine.

Lee has decided to slow down a little after his graduation and focus on the things that are most important to him. He plans on spending more time with his wife and son, investing into the Environmental Science & Stewardship (ESS) major, and increasing his efforts at science communication.

“One of the biggest things I’ve learned,” said Lee, “is that it’s about the journey, not the destination, the path that the Lord has for me.” The journey has had a significant impact on his spiritual life. He found that when he experienced the most stress was when he leaned on God the most. “The Lord has been my only strength,” Lee said.

Interested in studying science for the glory of God and the benefit of others? Learn more about our Environmental Science & Stewardship major below.