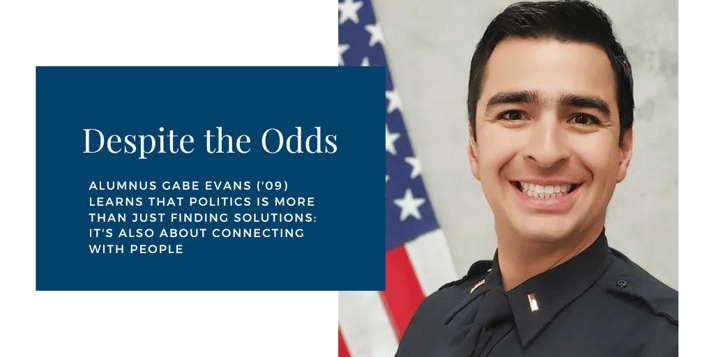 Evans learned that politics is more than just finding solutions: it's also about connecting with people. It's not only about providing facts about the situation but making those facts meaningful to the people.

Alumnus Gabe Evans (’09) recently won the Colorado State House District 48 seat. In addition to this win, Evans is currently working towards a Master of Public Policy and Administration from Colorado State University. Despite Colorado’s primarily blue status, Evans was able to win 63% of the vote as the Republican party representative. He credits this victory to his understanding of the area and his availability to the public. “[I] let people know [that] ‘I’m trying to be here for you. I’m not just telling you what I want to do, but I’m making myself available for conversations, for dialogue,’” Evans said. “My job is to represent the 90,000 folks in my district.”

Stretching from Brighton to Greeley, Evans’ district is one of agriculture. He grew up in Colorado and farmed during his childhood and after college with his family. This agricultural experience has allowed him to connect with the people of his district. When gas prices for diesel are raised, he knows that this is not just a harmless climate control advance but a serious threat to farmers, which in turn is a threat to everyone who depends on the farmers.

Connecting energy, agriculture, and basic economics together is one of the foundations of his political platform. “You can think the greatest thoughts in the world, but you actually [have to] put in the miles, actually get out, knock on doors, go to events, talk to people, build that social media presence, build those relationships with the media and any other venue that can help you spread that message,” Evans said.

For PHC students planning to run in the future, Evans advised primarily on building connections. “The number one reason people don’t donate is because they were never asked,” Evans said. One has to market oneself, letting people know that a small investment now will help get their voice heard in the capital in the future.

From his experience at PHC studying strategic intelligence in national security, his time in the military, and his time on the police force in Colorado, Evans has learned how to both lead and to serve. To better reach his district, Evans said he has learned how to carry a narrative. “I think we need to get back to actually turning a story,” Evans said. “Turning a narrative, showing that we care about human beings, about families and about communities, and getting back to emphasizing and discussing those things rather than the traditional republican way to be right.”

Evans said he remembers a class at PHC—one taught by Professor of Government, Dr. Michael Haynes—that stood out to him because it emphasized this principle. In the class, Evans and his classmates watched the Nixon vs. Kennedy debates. Nixon piled up fact after fact while Kennedy sang a song. It was Kennedy who won that election.

From this class, Evans learned that politics is more than just finding solutions: it’s also about connecting with people. It’s about not only providing facts about the situation but making those facts meaningful to the people. For example, one of Evans’ goals is to improve law enforcement measures. Despite Colorado being #1 in the nation for car theft, the recent political decisions in the state have restricted police action. Instead of reducing his argument to facts, Evans propositioned his district by shedding light on “hidden victims.” Yes, the people whose cars were stolen are the victims, but so also are other families within the district. If a plumber’s car were stolen, as Evans puts it, and his tools were in the stolen car, then the plumber would be out of work or have to cut into his savings to buy expensive tools for his personal business. This in turn affects his family and community.

“You have to use their terminology to connect with the audience,” Evans said. “There’s a ton of common ground—you just have to show them where it connects. Just get past the rambling, actually talk, and have meaningful dialogues.”

One example of effective communication that Evans gave was the airline history. Originally, traveling by plane was the most dangerous way to travel. The airlines had a formal dialogue with pilots, NASA employees, and psychologists to understand why their planes were crashing. What came of that dialogue was a realization of the reoccurring communication problems. Because they addressed their communication issue, traveling by airplane is now one of the safest ways to travel. “Being able to leverage those skills and make sure that actual communication occurs at the state capital and here in Colorado is not going to be based on merely good ideas but based on 50 years of practical science developed by the military and aviation industry.”

In the midst of a blue state, Evans stands as a minority. When he feels surrounded, however, he remembers Daniel and asks that God give him the wisdom and influence that Daniel had in his minority position.

“King Solomon said it best: be diligent and know the state of your flock,” Evans said. “I think that [PHC students] that are interested in taking this career path should understand that, first of all, Patrick Henry College does provide a very, very effective foundation. But they need to build on that foundation by gaining that practical knowledge, practical experience…Because the only way you can lead the nation and shape the culture is if you understand their culture. Don’t be conformed to the world, but you have to understand that culture. You have to have that wisdom, you have to have that ability to know your audience.”

Evans with his family.