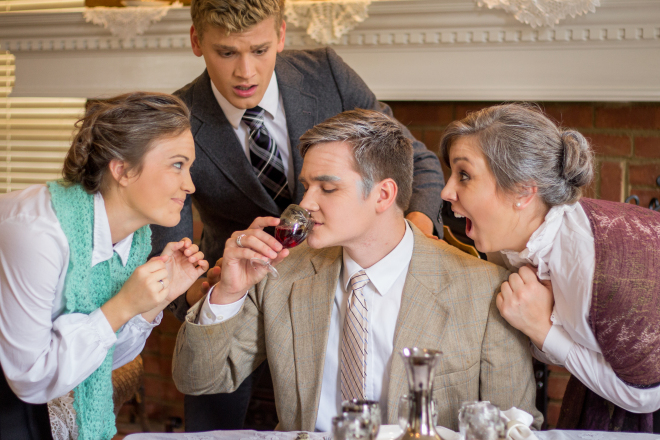 If you’re looking for something morbidly funny this Fall, consider stopping by Patrick Henry College from November 12-15 and catching one of Eden Troupe’s performances of Arsenic & Old Lace.

Written by Joseph Kesselring, Arsenic tells the story of Mortimer Brewster, a cynical drama critic who finds out that his two dear old aunts have been murdering lonely old men by poisoning their wine. Caught between his psychopathic brother on one side and an annoyingly loyal fiancée on the other, Mortimer struggles to find a way to stop his aunts in their tracks—without turning them into the police.

Cooper Millhouse, a native of Loudoun County and PHC student, will make his theatrical debut in the role of Mortimer. “I’m a bit of a sucker for peer pressure,” says Millhouse, “so when somebody told me I should audition, it was sort of the perfect storm and I couldn’t say no. Plus, Mortimer is exciting to me because of his continual frantic energy throughout the entirety of the play.”

Millhouse is not the only Loudoun native to take the stage in Arsenic. Hailing from Lovettsville, Eden Troupe veteran Grace Richardson returns to the stage, this time in the role of Martha Brewster, one of Mortimer’s two aunts.

“I love Eden Troupe and I love acting, and I knew it was a hilarious play,” says Richardson on her decision to audition. “I knew I would have a blast playing such a comedic character, and I love to make people laugh, so I knew as soon as it was announced I would be auditioning.”

On playing the role, Richardson says, “I am probably most excited to deliver Martha’s very simple, naïve lines. She says funny things, but with the best of intentions. It’s a bummer I don’t get to laugh at it!”

So if you don’t have plans for Nov. 12-15, consider coming out and seeing Eden Troupe’s production of Arsenic & Old Lace. Just leave the wine at home.