A Winning Season for PHC Moot Court—And on to Nationals! 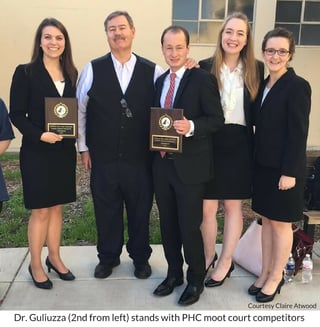 The following PHC teams will advance to nationals at the University of North Texas-Dallas College of Law:

Dr. Frank Guliuzza, Dean of Academic Affairs and moot court coach, called this season one of the best the school has had in the last few years.

“The system we put in place just seems to work," he said. "There’s some point every year where the competitors get invested. And when they do that, it’s hard to stop that momentum."

That momentum certainly kicked in as the teams went to their five tournaments. The first weekend of tournaments sent teams to Lynchburg, Virginia, and Orlando, Florida. PHC enjoyed its home state advantage—by finals, it was clear PHC would be the winner, as both top teams were from the college! Freshmen Keely Wright and Sarah Brown earned first and freshmen Samuel Bock and Samuel Zinkgraf took second in the final round. 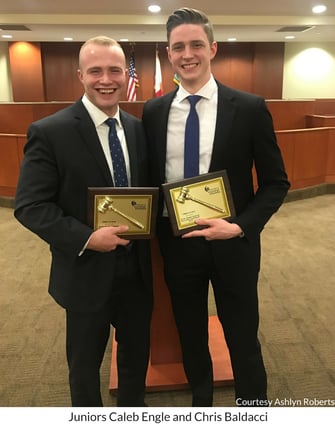 “I think a lot of the team was nervous going into regionals this year because a bunch of us are now upperclassmen and had very busy semesters, but we still performed at a really high level,” Chris said. “I think it is a testament to the caliber of our coaching and the cumulative preparation we get at PHC that even under time constraints nearly all of our teams were stellar.”

In the following weeks, several PHC teams competed at Regent University in Virginia. Junior Cooper Millhouse and sophomore Kyle Zimenick placed second in the tournament. And the icing on top of the cake? Millhouse and Ziemnick were awarded first-place and second-place speaker, respectively.

Two teams flew to Fresno, California, where they faced each other in the finals. Seniors William Bock and Claire Atwood took first, and senior Brenna Bakke and junior Marina Barnes took second.

“Even with just four of us, we were the top two seeds going into outrounds," Atwood said. "We had four of the top five speakers."

Seniors Claire, William, and Brenna have competed in moot court since their freshman year. William has won each qualifier in which he competed every year, three of which when partnered with Claire.