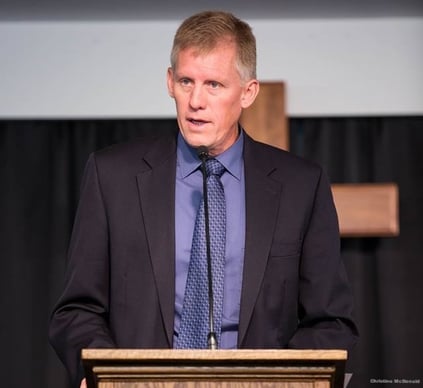 The Lockean framework on which our political institutions are built may not be as stable as we imagine, Dr. Mark Mitchell argued on September 19.

During his Faith & Reason lecture, entitled “Illiberal Liberalism and the Future of the American Experiment,” Mitchell linked a cultural emphasis of political correctness to the rise of "second wave" liberalism.

The lecture included analyses of Rousseau and Locke as well as an incorporation of biblical themes and principles. Mitchell argued that Americans should reject the cosmopolitan agenda and focus instead on local communities.

Last week, we asked for your responses to Dr. Mitchell’s Faith and Reason lecture. Here are some opinions from a few students and alumni who listened to the presentation:

As Dr. Mitchell explained, liberalism holds that we are autonomous and have the right to choose whatever we want. Yet we are not detached individuals starting from scratch, having only our will to power to guide us. Matthew Anderson says that the world does not “lie inert before us, waiting for us to make our own meaning by asserting our wills over it.” As Chesterton points out, we are born into the world first, and therefore our loyalty to it precedes all else; man “has fought for the flag ... before he has even enlisted.” We don’t get to decide what’s real and important. There is a way things are that is much bigger than ourselves. If this is true - if the world is outside and before us - liberalism is a wrong account of reality.

Furthermore, for us, rejecting liberalism doesn’t need to be an abstract philosophical exercise. In the person of Christ we live, move, and have our being. As I have absorbed this as a concrete reality, it has changed the way I live. It’s never worth it to try to be autonomous. We are finite and dependent because we are created beings. We are simply not our own. And autonomy (which is detachment from reality) is not the glowing ideal that liberalism would have us believe it is. In Him, our ineffably good Creator and Redeemer and Lord, all things hold together. Reality demands that we worship Him. And when we do, He will satisfy us.

Dr. Mitchell and Dr. Grewell's lectures ought to be put in conversation with each other. Dr. Mitchell ends his lecture by calling for a renewed political theology grounded in the conception of a Trinitarian God that gives rise to a social, community-oriented conception of human nature, not one of the discrete, autonomous self. This political theology, Dr. Mitchell suggests, should run counter to the closed-off systems of theology we often encounter today and have as its hallmarks the ongoing creative action of God, the suffusion of the world with the power of Christ (and the Spirit, one might add), and the nature of man as contingent participant in creation—in short, the very conceptual framework that underpinned Dr. Grewell's concept of "participating being.”

I think the lecture provided a very good analysis of the continued political tradition of liberalism that has dominated the West for three centuries. All too often we may try to react against later stages of liberalism by invoking earlier forms of liberalism without realizing the latter’s role in producing the former. Dr. Mitchell did a good job of explaining the basic connections within the stream of late Western ideology in terms that most PHC students could probably understand, without getting tangled in further details about the role of the labor theory of value in ending mercantilism or the implicit positive rights required to justify state defense of negative rights. I also really loved the conclusion during which he elaborated on the doctrine of the Trinity and showed how the Imago Dei must thus contain both individuality and community. I had long wondered the reason for the suspicious connection between many of the architects of classical liberalism (Locke, Jefferson, etc.) and belief in anti-Trinitarian heresies. I’ve been a Theory student long enough to get used to this, but the unorthodox and secularist origins of the entire modern political spectrum really is a very daunting topic to confront for the first time, and I’m glad Dr. Mitchell introduced the student body to it.