Virginia is home to some of the richest histories and oldest American landmarks. Tourists come from all over to see the picturesque leaves and rolling hills. Any time spent in The Old Dominion State is wonderful, but why not get the most out of your time here?

PHC is located in Purcellville, VA—50 miles outside our nation's capital, 30 minutes from the West Virginia border, and 30 minutes from the Maryland border. With so many places to explore, it's easy to completely miss the highlights inside state-borders.

Keep reading to find out which spots you HAVE TO visit before you end your stay in Virginia.

Just one hour from Patrick Henry College, Skyline Drive is a 105 mile-long road that runs the length of Shenandoah National Park. The park extends along the Blue Ridge Mountains and includes long sections of the Appalachian Trail. The park is home to over 500 miles of trails ranging of all difficulty-levels.

Visiting this VA staple, you are likely to encounter no shortage of wildlife and incredible scenery. It's up to you whether you camp it, hike it, or drive it.

The three most popular VA presidents' homes are Mount Vernon, the beloved home of George Washington (1 hour from PHC), Monticello, the architecturally magnificent home of Thomas Jefferson (2.5 hours away from PHC), and the understated Montpelier, James Madison's home (2 hours away from PHC).  VA is known as the "Presidential State," because it has been the home state of the most presidents: eight so far.

VA is home to seven tourist-accessible caverns, large underground caves worthy of exploring. They stay about 50 degrees Fahrenheit all year round, so visiting one is a perfect way to cool down in the summer or warm up in the winter! 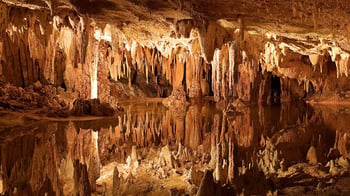 Speaking of natural mineral formations, Natural Bridge is a must-see, only two and a half hours from the College.

This "bridge" is a gorge formed by years of erosion as the Cedar Creek streamed through limestone.  The land was once owned by Thomas Jefferson, and may have even been surveyed by George Washington. During the day, you can hike along the creek, and at night, you may observe a light show. 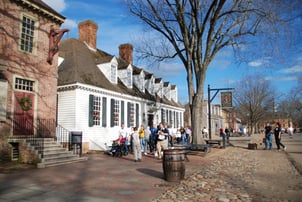 Colonial Williamsburg is one of the most famous living history museums in the country, and it's only 3 hours away from the College. Williamsburg was the capital of the VA colony from 1699 to 1780. You can pay for full access to the museum, but you can also walk through the streets and visit the old-time shops in the Merchant Square for free.

Williamsburg is one leg in the "Historic Triangle." The other two are the Jamestown and Yorktown settlements, both just a few miles away from Williamsburg.

Richmond, VA served as the Confederate capital during the Civil War. The state is home to six Civil War National Parks perfect for history buffs.

Manassas National Battlefield Park was the battleground of two major battles fought near a stream called Bull Run. The First Battle of Bull Run was the very first battle of the war. (40 minutes from PHC)

The Fredricksburg and Spotsylvania National Military Park houses the battlefields of four battles,  the Battles of Fredericksburg, Chancellorsville, The Wilderness, and Spotsylvania. (2 hours from PHC)

Most of Petersburg National Battlefield is devoted to the nearly 10-month siege Petersburg endured in 1864 and 1865. (3 hours from PHC) 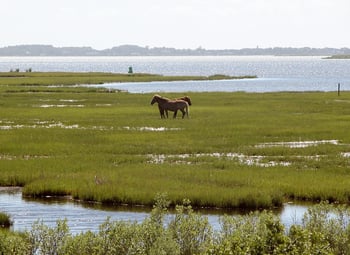 Everyone loves Misty of Chincoteague, but few realize they can actually visit her. Chincoteague is a 7 mile-long island town, part of VA's Barrier Islands. It serves as the access point to Assateague Island, the outermost barrier island in the Delmarva Peninsula and home to herds of wild horses known as Chincoteague Ponies.

Each year, Chincoteague Island residents ride into Assateague to round up wild horses and swim them across the channel to auction them off. The money raised goes to the local fire fighters. This event attracts tens of thousands of people, so while this is the event that the island is most known for, many recommend visiting the quaint town some other time. 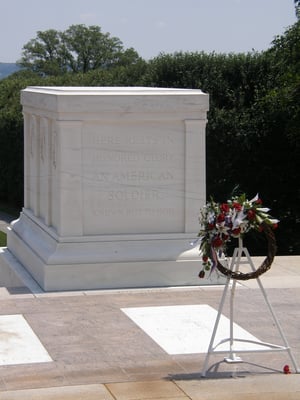 Just an hour away from the college, Arlington National Cemetery houses the grave sites of those lost in combat beginning at the civil war and even some reinterred dead from earlier wars. The Cemetery is based on 624 acres of land right across the Potomac from Washington, D.C.

It is also home to the Tomb of the Unknown Soldier, a monument dedicated in honor to the deceased whose remains are still unidentified. The tomb is guarded 24/7 by members of the 3rd U.S. Infantry Regiment. "The Tomb is guarded, and has been guarded, every minute of every day since 1937," says the website.

How many of these landmarks have you been to? Which ones are on your road trip bucket list? Comment below!

Interested in seeing the Virginia sites and visiting PHC?