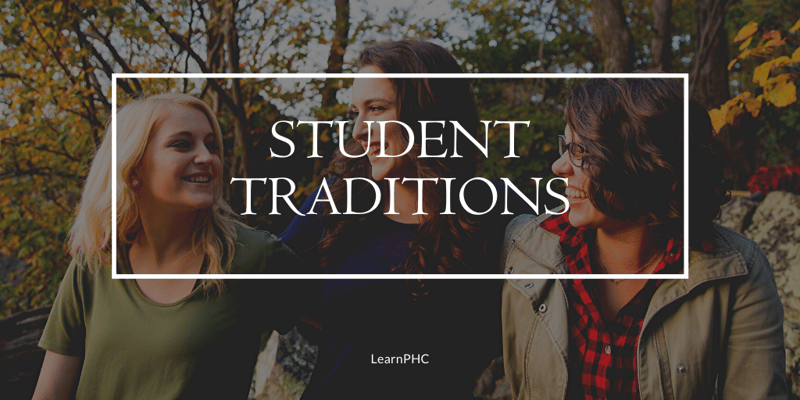 What do block parties, talent shows, and being tossed in a lake have in common? At Patrick Henry College, they are all cherished traditions. Even though PHC is a young school, 16 years is more than enough time to develop a treasury of campus customs. Here are just some of our favorites, old and new.

Sometime after a student couple gets engaged, the man’s friends plan a cold surprise: a bath in PHC’s “Lake Bob.” The couple is brought to the flagpole at the center of campus, where their friends pray for their future before tossing the man in the lake. “As I remember, it was started my sophomore year when two inaugural students got engaged,” says Christina Hansley, who was among the first class to attend PHC. Fifteen years later, the tradition is going strong. “It’s nice to say you were willing to get thrown in Lake Bob for your fiancée - it's quite a testament to enduring,” said senior Ryan McDonald, who was “Bobtized” last semester.

Every year on September 10th, PHC students place exactly 2,997 flags around the flag poll in memorial of those who died in the infamous terrorist attack in 2001. Rebecca Gallop (’11) brought the tradition to campus in 2008 having started it in her home state of New Jersey. “I wanted to keep the memory alive,” she said. After the flags are in place, the students sing the National Anthem and pray for the families affected by the attacks. This past fall, Gallop brought her two children along for the occasion. “I'm so grateful that the students at PHC have kept the memory alive!” she said.

As a welcome break from finals studying, students head into Town Hall at the end of the each semester’s first reading day for the Harmonicomedy. The biannual talent/comedy/variety show features an array of student acts, from musical performances to comedy routines and skits. The show was started by Scott York (’09) and David Carver (’08) in 2006 as a way to highlight student talent and bring the campus together. Since York and Carver, there have been three generations of hosts, each duo eventually passing the baton to a pair of deserving underclassman to keep the tradition alive.

At the end of every spring semester, students across campus put down their books and put on their dancing shoes. The Liberty Ball is PHC’s yearly formal where students have the opportunity to enjoy an evening off campus with friends, music, and food aplenty. The event is perhaps PHC’s oldest tradition, dating back to the first years of the school when a local host family helped organize the first dance at a nearby plantation manor. For a tradition within a tradition, one student each year memorizes Patrick Henry’s famous “give me liberty or give me death speech” to recite as an interlude in the middle of the evening’s festivities.

On February 22, many PHC students travel to D.C. to attend the March For Life. Held on the anniversary of the controversial Supreme Court decision in Roe v. Wade, students join with other pro-life Americans in prayer and protest at the nation’s capital, advocating for the rights of the unborn.

In the spring semester, PHC seniors have the opportunity to share things they’ve learned while at college and ways God has worked through their lives. “I deeply appreciate the tradition of seniors being able to share their memories, lessons, and stories of joy, brokenness, failure, growth and grace with the student body,” senior Timothy Hsu said. “It reminds us as a community that life is deeper than what meets the eye, that no one has it all together, and that God is faithful beyond our wildest imaginings.”

Almost every freshman’s first big test at PHC is Dr. Robert Spinney’s U.S. History exam – a well-known challenge to welcome new students into the world of PHC academics. To help ease the freshman nerves, a group of surviving sophomores buy soda, chips, and candy to leave in the dorms for all the freshmen.

For fun, friends, and food, the students head down to the end of Covenant Court for the D4 Block Party each fall. The tradition was started in 2007 by friends Caleb Jones (‘08) and Nathan Martin (’09). “We had some extra money in the D4 war chest and I was convinced we should throw a party centered around a dodge ball tournament,” said Carden. “We had the inaugural tournament, a great party, a live concert. It was a blast.” Since then, the event has become a campus favorite “We also have a couple surprises this year to make the event really special,” said junior Philip Bunn. 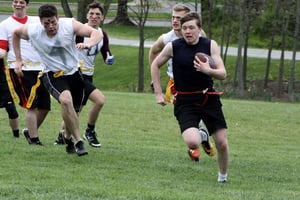 While PHC students all love each other, the men of Oak Hill (D4) and Red Hill (D5) have a rivalry, culminating each semester in a football game. The winning dorm’s team receives a trophy to be kept in their dorm’s lounge until the next semester, when the other dorm is itching to win it back.

Subscribe to LearnPHC for lists, study tips, quizzes, and more!