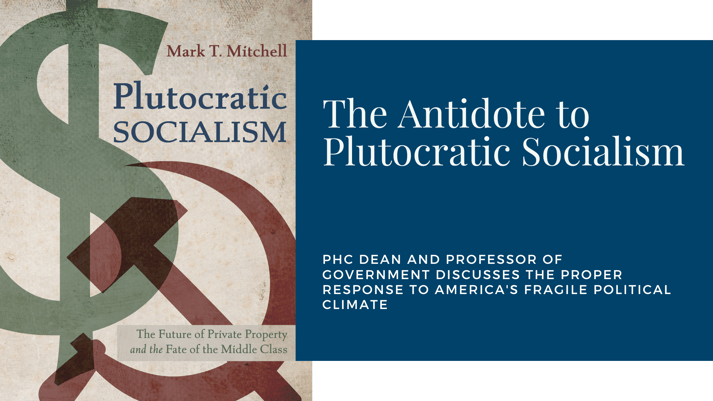 Patrick Henry College is dedicated to upholding three key distinctives: high academic rigor, an unwavering biblical worldview, and fidelity to the spirit of the American founding. The American Founders clearly grasped a principle that is today being forgotten or denied: political freedom and private property stand or fall together. This ideal is expressed in Micah 4:4, one of the most frequently quoted verses in the American Revolutionary period: “They shall sit every man under his vine and under his fig tree, and no one shall make them afraid.” 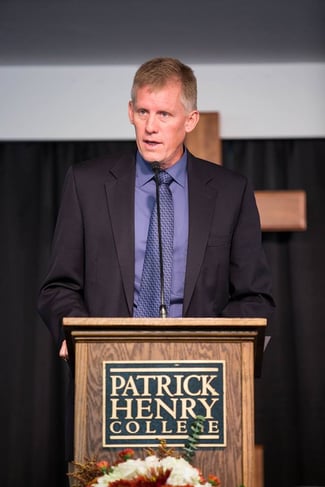 Dr. Mark Mitchell, PHC’s academic dean and professor of government, teaches a unique course in PHC’s core titled “Freedom’s Foundations.” In this two-semester course, students are introduced to the history of political freedom. They learn that a free society is a remarkable cultural achievement and that private property is an indispensable element of any truly free society. They come to see their responsibility as citizens to faithfully steward their inheritance for future generations.

In his most recent book released in May, Dr. Mitchell explores the connection between political freedom and private property. He shows how both ideals are threatened today by the emergence of a social and economic condition he calls Plutocratic Socialism.

If you want a taste of a PHC education along with an insightful analysis of contemporary America, check out his book, Plutocratic Socialism: The Future of Private Property and the Fate of the Middle Class, now available at Amazon and the publisher.

Continue reading for an excerpt adopted from the book's preface:

The American constitutional order assumes a populace of property owners, a middle class whose virtues provide the necessary ballast to support our republic. Our founders imagined strong communities, strong families, and independent citizens capable of self-government. They knew if the people degenerate into an insolent plutocracy on the one hand and a disgruntled, insecure, proletarianized mass on the other, the American experiment in self-government would become increasingly fragile and eventually collapse.

This unraveling is happening before our eyes. A plutocracy—that is, rule by the wealthy and their surrogates—is emerging as large public and private entities exercise increasing power through both the law and the market. This is characterized by an incestuous union of Big Government and Big Business, neither of which has the interests of the citizen-consumer in mind. As I write, the government is expanding its reach to compel citizens to submit to an array of mandates including Covid protocols, racially charged educational curricula, climate-change standards, pervasive surveillance, and militarized police forces, all ostensibly justified by our fears.

At the same time, corporations wield their power by aggressively promoting a radical social agenda and in the process depriving consumers of such basic goods as privacy or a platform for free speech. Employees who don’t toe the line retreat into fearful silence or lose their jobs. As the wealth gap grows, insecure citizens clamor for economic security via government programs, subsidies, and guarantees. Political and economic insecurity provides the opportunity for the plutocrats to entrench their power by means of handouts that only temporarily mask the underlying problems. Trillions in deficit spending assuage present demands at the expense of future freedom. Indeed, we are exchanging the freedom of our descendants for the illusion of security today. They will be justified in destroying the statues we erect to honor ourselves.

Yet wealth is not sufficient for gaining access to the current plutocratic class. What is also necessary is a particular outlook, a plutocratic psychology, if you will. This illusory meritocracy is rooted in the false belief that wealth, or proximity to wealth, is an indication of special moral virtue. Not surprisingly, this belief manifests itself in a disposition of self-righteousness whereby those infected by it come to see themselves as superior to their fellow-citizens who are, alas, not wealthy or connected. They come to see themselves as above the law, for law is necessary for controlling the common citizen, but it is certainly not something that should limit those possessing the moral superiority that wealth would seem to denote. Thus, the plutocracy in America today is characterized by both insolence and self-righteousness, and it is not conveniently confined to either the Left or Right.

Wealth is not the problem. Any society where citizens are free to buy, sell, and to own and dispose of their property will result in inequalities. Christ told us that the poor would always be among us. So too the wealthy. The problem I am addressing is a particular view that claims a connection between wealth and moral virtue and a political structure that privileges the wealthy over everyone else. There is a world of difference between a society consisting of a majority of citizens who are middle class and who exercise a controlling influence over the political landscape and a society consisting of a shrinking middle class and growing wealth disparities. In such a situation, the wealthy will invariably possess power disproportionate to their virtue. America today is confronted by this unhealthy social and political situation.

A plutocratic class, if it is to survive in a democratic age, must placate insecure, propertyless citizens with state-sponsored benefits that provide the illusion of security. This welfare state will, in time, generate explicit calls for socialist policies and programs. Plutocratic Socialism, then, is a system built on a symbiotic relationship between two seemingly opposed classes: plutocrats and socialists. We are now witnessing this in America. Moreover, the newest iteration of socialism today has joined with the regnant social justice movement creating a toxic brew of social, political and economic pathologies—call it Woke Socialism.

There is another way. A broad middle class, characterized by the ownership of private property, is the only real means by which citizens possess both the power to govern themselves and the virtues necessary to do so. This suggests a crucial insight: if wealth is unduly concentrated, power will be unduly concentrated as well. The inverse is also true. If property is broadly owned, power will be broadly distributed. The latter ideal is the essence of a healthy democracy.

Today we stand at a crucial moment in our nation’s history, and our actions will determine our collective fate. We can choose dependency and servitude at the hands of our plutocratic masters or we can choose the freedom that is inseparable from a society shaped by the ownership of private property. The first step is, as always, to see clearly. We must recognize the basic facts of our condition if we hope to have any chance of providing a remedy. Our analysis must begin with a simple, yet profound, axiom: private property and political freedom stand or fall together.