What You Need to Know About Living Off Campus 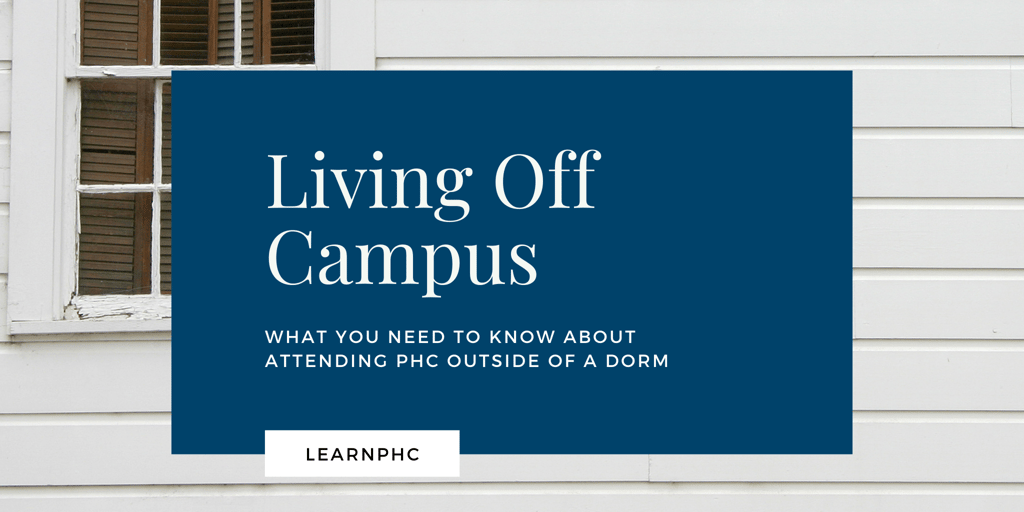 Some students choose to live off campus during their time at PHC. Whether living with family or staying in an apartment, there are pros and cons to living off campus. Recent graduates Elias Gannage, Spencer Reeves, and Michael Pozo have some insights to share when it comes to life off campus.

Gannage lived off campus during his senior year. He enjoyed being able to “set his own rhythm.”

“When I wanted to go to bed, I could do that. And then when I wanted to get up in the morning, I could have a rhythm and stick to it. It’s not that you can’t do that in a dorm, it’s just way harder to do that in a dorm setting… [living off campus,] when I was done or when I needed to be done for my own good, I could be done. It helped me adult, it helped me be more responsible with my time,” he said.

Reeves lived off campus for the summer after his junior year and during his senior year. He found that living off campus helped him have a healthy space from the stresses of a rigorous academic schedule.

“You have a lot more control over your own space; you have a kitchen to yourself. I personally loved that,” Reeves said. “It gives you a way to get outside the campus bubble a little bit.”

Pozo lived off campus with his family during his entire time at PHC. “I didn't have to leave the comforts of home while receiving a really good education and strong relationships with on campus students,” he said.

One of the biggest pros for Pozo was the food. “My mom cooks very well, and she taught me how to cook better,” he said. “[I was] able to have a life outside of campus. Many times, I would invite friends to my house, and we would have a really great time in my neighborhood.”

For Gannage, the biggest con to living off campus was having to plan his meals every day. “You have to work at it because otherwise, you’ll realize that you’re hungry and have to come home when you want to hang out with friends. And you’ll have to decide between food or friends and you don’t want to have to make that decision,” he said.

Reeves found that living off campus limited his availability. “You don’t have the same ability to be spontaneous,” he said. “There’s something about these feelings of living communally and being able to be there for friends the moment they’re going through something. You lose that ability when you’re living off campus.”

“I did miss a lot of the community aspect of PHC, which is definitely something I wish I could have experienced more fully,” Pozo said. He wasn’t able to experience certain aspects of the PHC community such as intense dinning hall conversations or the flag football dorm games. “Those were some things I wished I could be more a part of,” he said.

“Definitely think about why you want to live off campus, because you want to have good reasons for why you make a change. You can save money that way, certainly, and be intentional to still stay connected with your friends on campus,” Gannage said. “If you want to be involved in campus life at all, you just have to be very conscious about how you do that. Take the opportunity to experiment.”

Pozo recommends leaving extra clothes in your car or with a friend on campus. “Make really close friends. Take advantage of any times you can be on campus that is not school-related. Find a local church and be involved so you don't stray from the faith. You have a lot of liberty, time, and independence so use it well. Use your space as a place of fellowship and a place to make great memories. So, essentially, be on campus when you are given the opportunity, but also make good use of your home,” he said.